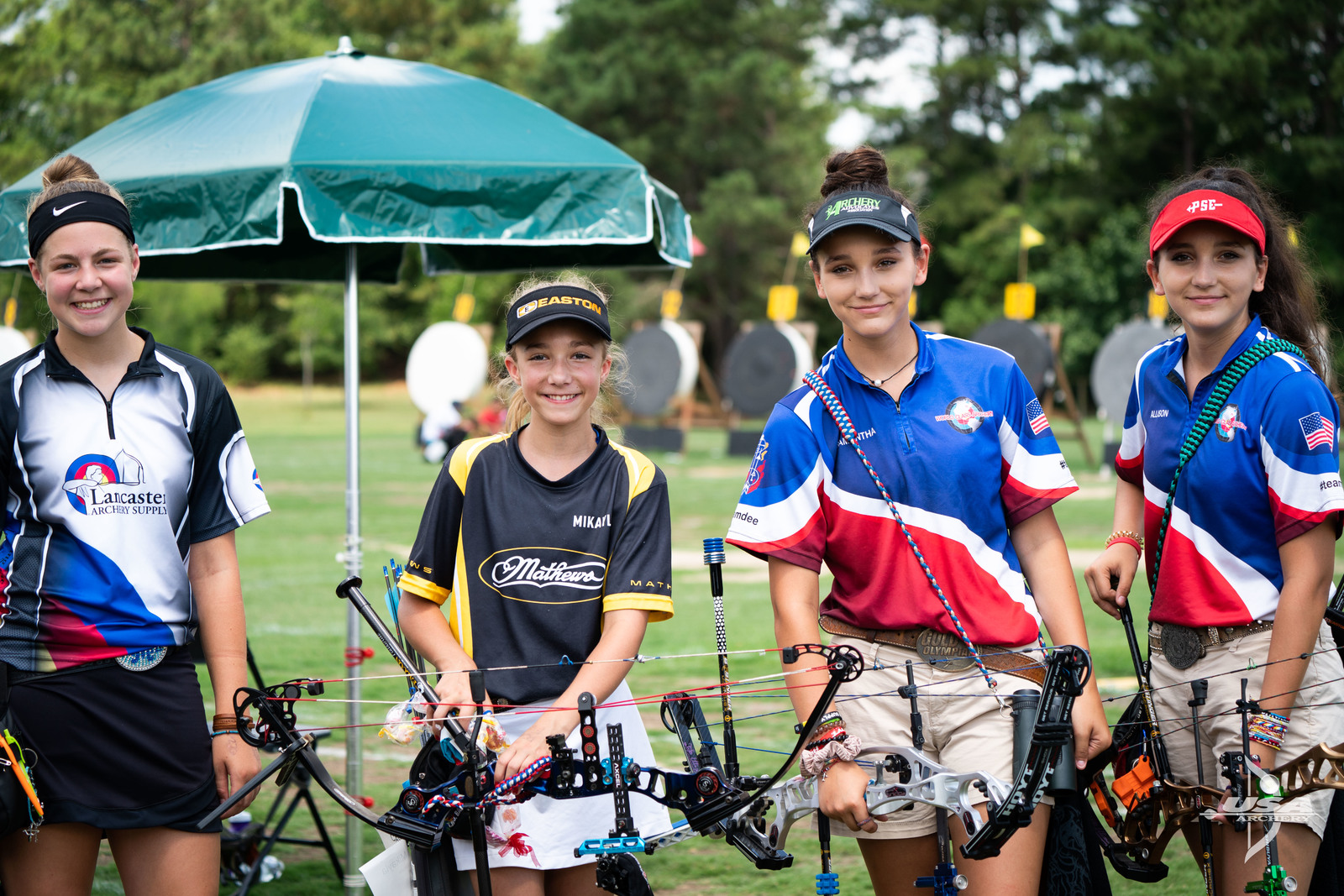 RALEIGH, North Carolina – The 2019 Junior Olympic Archery Development (JOAD) National Target Championships kicked off scoring today with the first 72 arrows of qualification. With nearly 800 archers on the field, this is the biggest and most competitive youth archery event in USA Archery’s history. The weather was hot and humid – including a heat index weather delay in the afternoon – but with little wind, archers shot big scores and made new friends at this fun and exciting event.

One big surprise of the morning was Solomon Goldstein, who has been competing on the national circuit for years, but topped the junior recurve men’s qualification today with his best performance to date. Goldstein outscored Josef Scarboro by just one point with a 648.Goldstein moved to Arizona in his senior year of high school to be closer to his coach and step up his training: “It was really hard to leave my family and friends – I just moved out there with my mom, but I’ve just made huge leaps in progress,” he commented. “I was doing archery for three and a half years before this, but this last year I’ve made huge jumps in my skill, ability and mental strength. I just love archery and it’s been really fun to see how my progress has been made; I’m excited to stay on top and just keep going.”

World No. 1 Alexis Ruiz was third behind Youth World teammate Savannah Vanderwier and Danielle Woodie, who both posted 692s to lead qualification so far for the junior compound women.

Compound cub woman Samantha Roberts is at her second JOAD Nationals, making a stronger run than her first with a little experience under her belt. The compound cub division scores were super tight, with shooting coming down to the last few arrows to determine the first few spots. Leading qualification with a 707, Roberts shared: “I was just trying to do what I did in practice yesterday because I scored really well. My coach told me to just keep on shooting until I got tired of shooting 60s.”

Roberts’ favorite part of JOAD nationals is: “just being able to shoot with a bunch of people who shoot just as well as I do and see how I rank between them and to meet a lot of new people.” 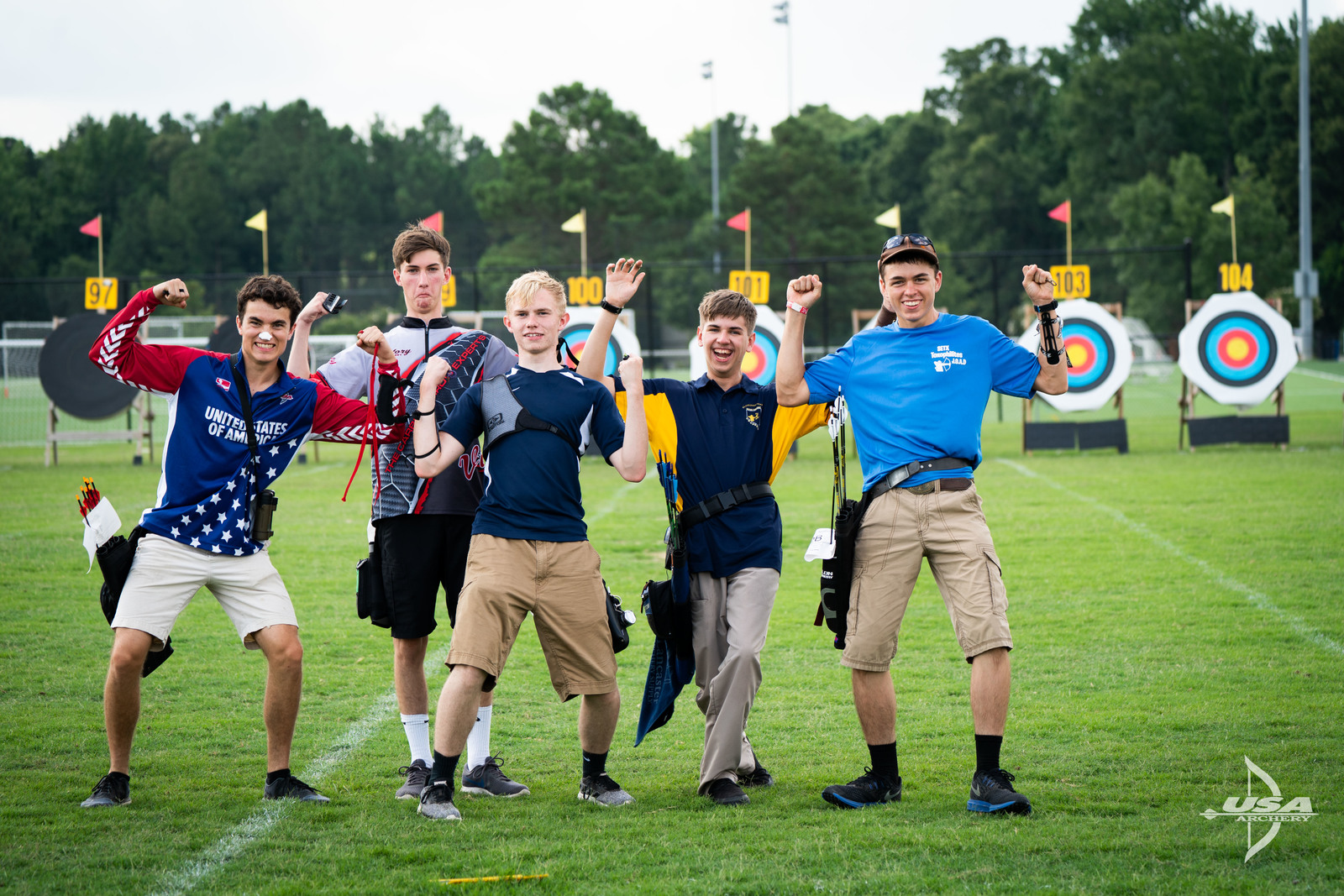 Daniel Schell posted a 552 to lead the barebow junior men’s division by six points, despite scoring a miss in the first end when he thought he was only supposed to shoot five arrows per end. “Today was great, shooting was awesome, it was solid. Barebow nation is always about fun, we know each other and are used to shooting together so we have all the jokes.” On looking forward to the rest of the tournament, Schell added: “I like matchplay, I like pressure, what’s not to love?”

In the afternoon’s more challenging heat, Ali Bliss broke the barebow bowmen women’s national record (pending verification) with a 595 – three points higher than the previous record. “Today was probably one of the best day’s I’ve ever had,” commented Bliss. “I have worked so hard to get this record – I’ve tied it two times now.”

Cooper Byrum is sitting on top of the compound bowman men’s division with a 705 today: “I worked my way up today and about the 7th end I started shooting pretty good. I like JOAD Nationals because there’s more competition than any other tournament. At one point today I called my dad and he was like ‘you’re smoking it.’ I’m looking forward to having more good competition and shooting the best scores I can.”

Competition resumes tomorrow with the second half of qualification. Complete results from the competition are available here. Photos are available on USA Archery’s photo site. For more, follow USA Archery on Facebook, Twitter, and Instagram.