Sullivan with his first bow at Christmas 2014: “When I asked for a bow that one Christmas, I never imagined myself being able to travel all over and represent my country doing something I love to do! My dad was my first coach and he would come shoot with me all the time. We would go after school almost every night.”

Rewind to 2017—Sullivan, who began archery at 8 years old to bowhunt with his dad, was then 13. “I shot in Lansing, Michigan at my first Youth World Trials,” he shared “My parents and I decided I should just shoot it for experience. I stood next to all these amazing archers. I was in awe of their talent and their kindness. I finished second to last in that tournament.

“USA archery took an amazing team to Argentina that year and I followed scores, watched them win medals and set my sights on making the team one day. I am not going to lie, there were days it was hard. There were days I didn’t want to shoot. There were many, many days that I felt like I was never going to reach that goal.”

Over the next four years, Sullivan put in the work, climbing the ranks and finishing the 2020 season in third for the compound cadet men. “I went into this last season with an open mind. I had only two major goals when the season started - to make USAT and to make the Youth Worlds team,” commented Sullivan. Returning to more normal competition conditions after COVID protocols shook things up in 2020, Sullivan said he worked to overcome mental hurdles and knew he had his equipment running well.

“After the Arizona Cup, I felt like I had some momentum going into the next couple of events. After the Gator Cup, I definitely felt pressure to keep the streak going. Each competition, I just tried to stay focused but to also have fun. I knew the competition at each tournament would be intense.” 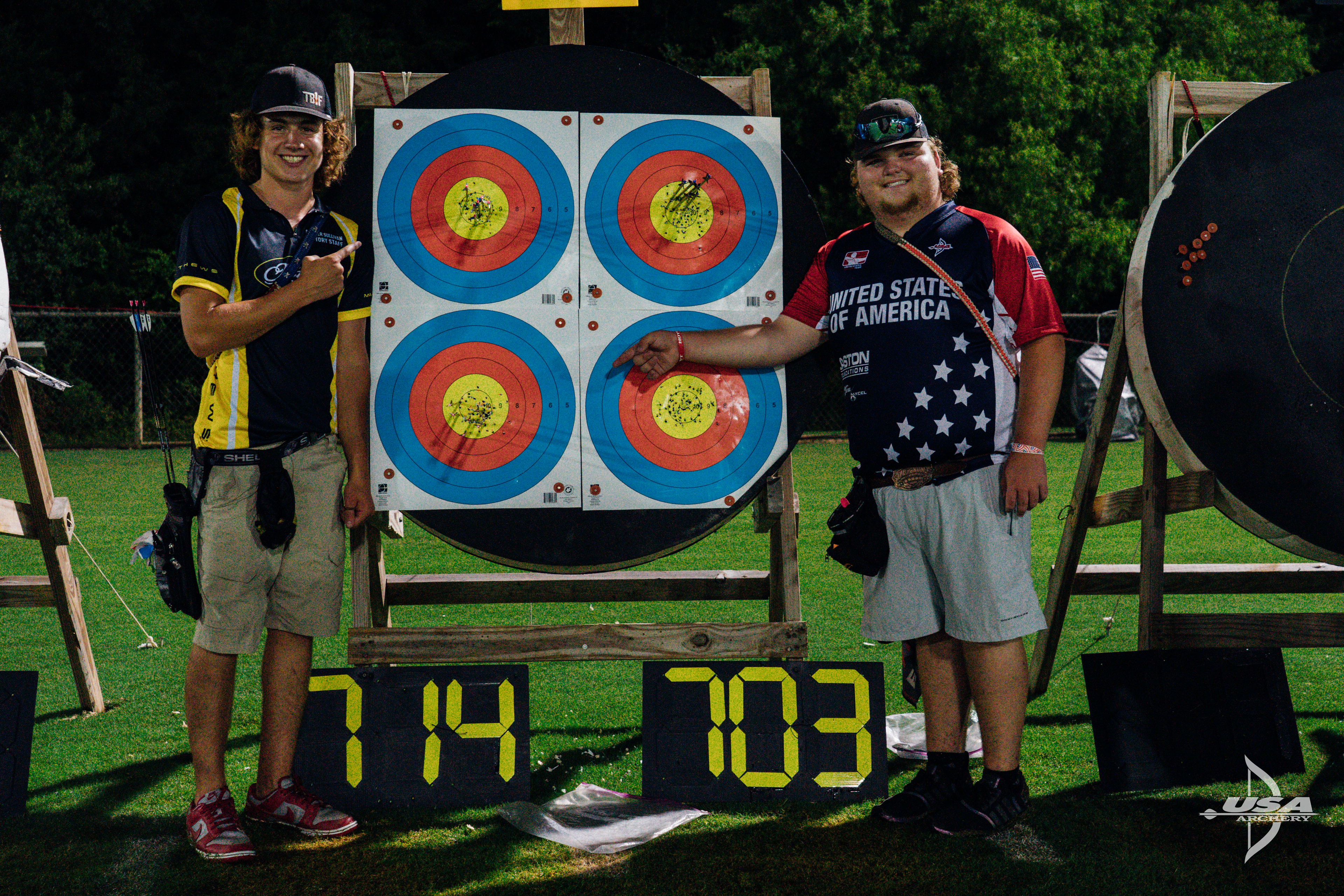 Chasing the world record also motivated Sullivan all season. Previously, he’d struggled with his final arrow in competition, but he knew that was behind him and his practice scores proved the record was in reach. Sullivan said, “I always figure that my practice score will drop a couple points at a competition, with the pressure and different conditions at each tournament. The first event that was weather permitting was SoCal and I really tried to beat it. I fell short of it by two points and that motivated me even more. I wanted that record so bad.”

Sullivan trained 6-7 days each week, sometimes shooting a 72 or 144 arrow round, or practicing matches against himself: “What helped me the most was shooting matches against my friends. I knew what worked and what didn’t, so leading up to outdoor nationals and youth worlds I shot as many times against friends as I could as I knew this is what put the most pressure on me.” Sullivan’s friend and top competitor Cole Zeug, who lived only 45 minutes away, would meet up weekly for some friendly competition (and some fishing on the side!).

“I trained with my coaches as well. I wanted as much feedback as I could get from my coaches and my friends,” added Sullivan. On the first day of JOAD Nationals, Sullivan broke the record by two points. Then the next day, he shattered his previous score by an additional six points! “This proved to me that hard work really did pay off. I never thought I would be chasing a World Record - that feeling knowing you are so close to something so amazing is pretty awesome.” 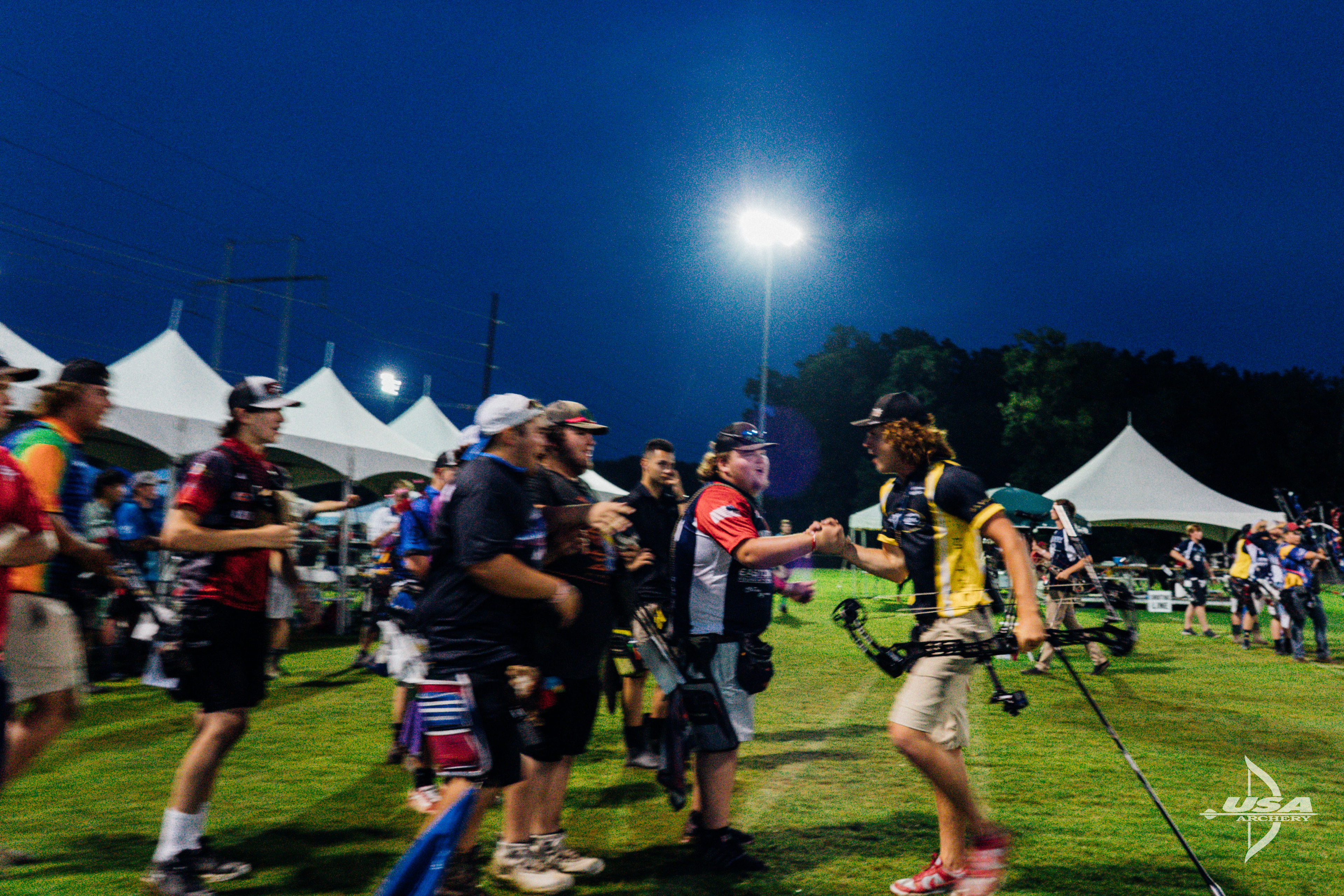 After Sullivan’s final arrow of the ranking round, the field erupted in cheers and archers swarmed from every angle to celebrate. “Friendship in this sport is like no other. Even though your friends are your biggest competitors you all can get along on and off the field. I know my friends have pushed me harder than any score or any other motivator,” shared Sullivan. “After I came off the line in Alabama, they were all waiting for me and that was one of the coolest moments of my life. They were all genuinely excited for me. You don’t get that in many other sports. We all know we have each other’s backs.”

Sullivan’s strong support system also includes his family: “My family is so important to me and they are my biggest supporters. I couldn’t do any of this without their support. We work together as a team to make it all happen. My mom is a great spotter at tournaments and my dad is an awesome bow mechanic and arrow builder. Pretty sure I have added a few grey hairs to both my mom and dad! It takes some pressure off at tournaments knowing I have their full support. My mom always says it takes a village to do all of this and she is absolutely correct. My whole family does so much to make this all work. I have two younger siblings, my brother Parker and my sister Sadie. They often times have had my parents miss things of theirs because they are at a tournament with me. My grandma and my aunt often serve as ‘Uber’ drivers for my siblings too. I know the sacrifices they have all made to make my dreams come true.

“I have really had such amazing people and companies come in to help and support me,” added Sullivan. “Archery Country in Rogers, Minnesota is the local shop I shoot out of. They are always helping me and deal with me when I need something last minute! Mathews Archery is a class act bow company and I am so happy to represent them and shoot for them. It is like one big family in the archery community.” 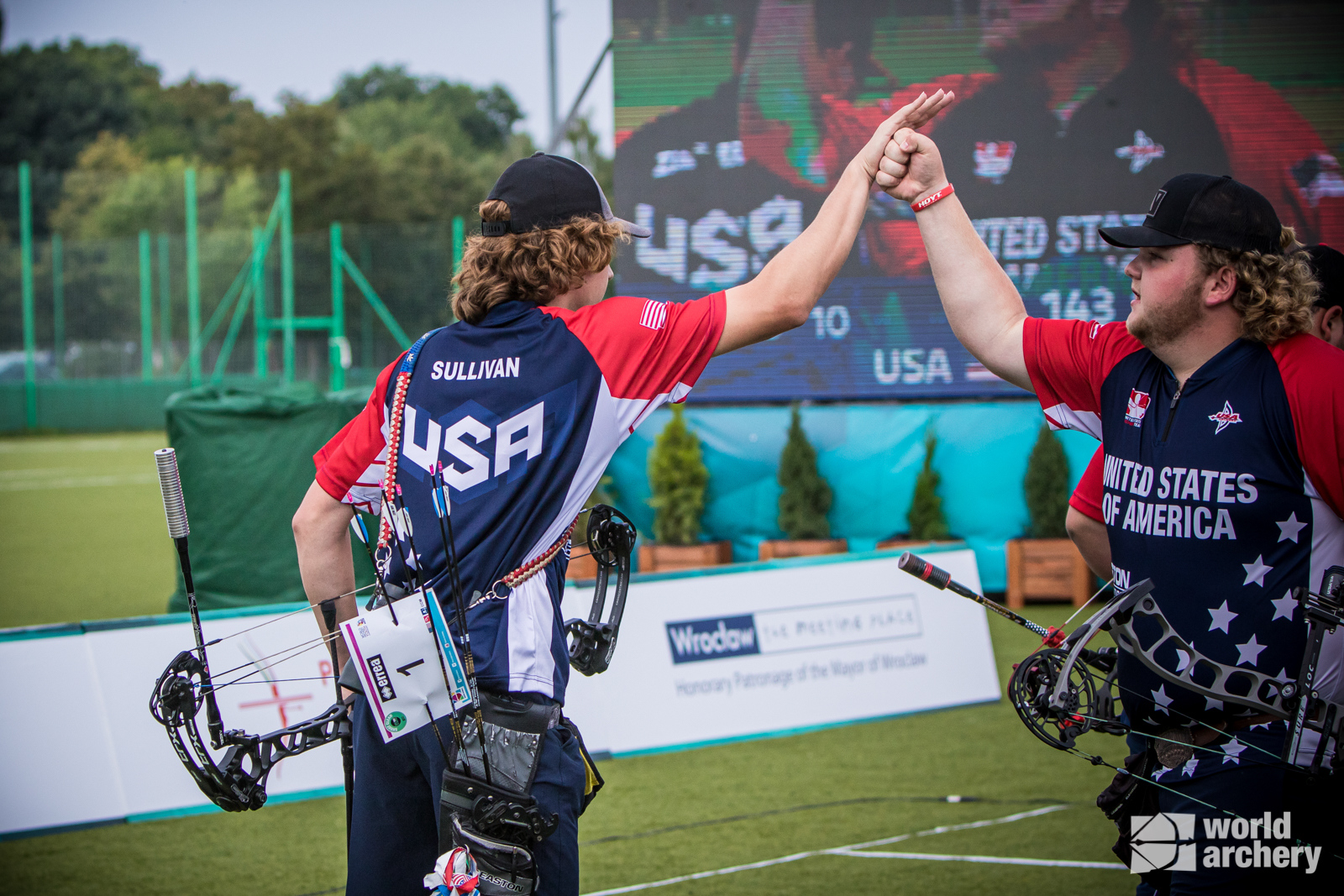 After completing what many would call the perfect season at home, Sullivan headed to the World Archery Youth Championships with heavy expectations on his shoulders. He was one point off his own world record and needing a perfect 60 in the last few arrows, he said he got in his head and was shaky. He then battled through tough matches to earn a place in all three gold medal matches, and finished with all three silver medals. Yet, Sullivan came home with such positive takeaways and lessons learned.

“It was very cool to be able to represent team USA at the youth world championships,” commented Sullivan. “I was honored to be able to get that experience. Being on the Cadet team with two of my good friends, Isaac Sullivan and Nathan Zimmerman was so awesome. I definitely felt a lot of pressure going into this tournament, but I knew I had to stick to just shooting my bow.”

He added: “It was a great learning experience dealing with that kind of pressure. My biggest takeaways from this tournament were learning how to deal with stage pressure and pressure from everyone in general. I did learn - from the help of my coaches - that the pressure I was feeling was good pressure. I had all these great friends and amazing people cheering for me. They were there for me win, lose or draw. I needed to remind myself of that sometimes. It's a whole experience when your last end is being watched by everyone. This really fueled me going forward because I want to make it back to the world stage one day! Being on the field with all the amazing shooters from all over the world is a huge accomplishment. At the Youth World Championships, everyone out there is on the top of their game. The competitors, coaches, and all world archery staff are just so amazing. I just tried to enjoy every moment I was there.” 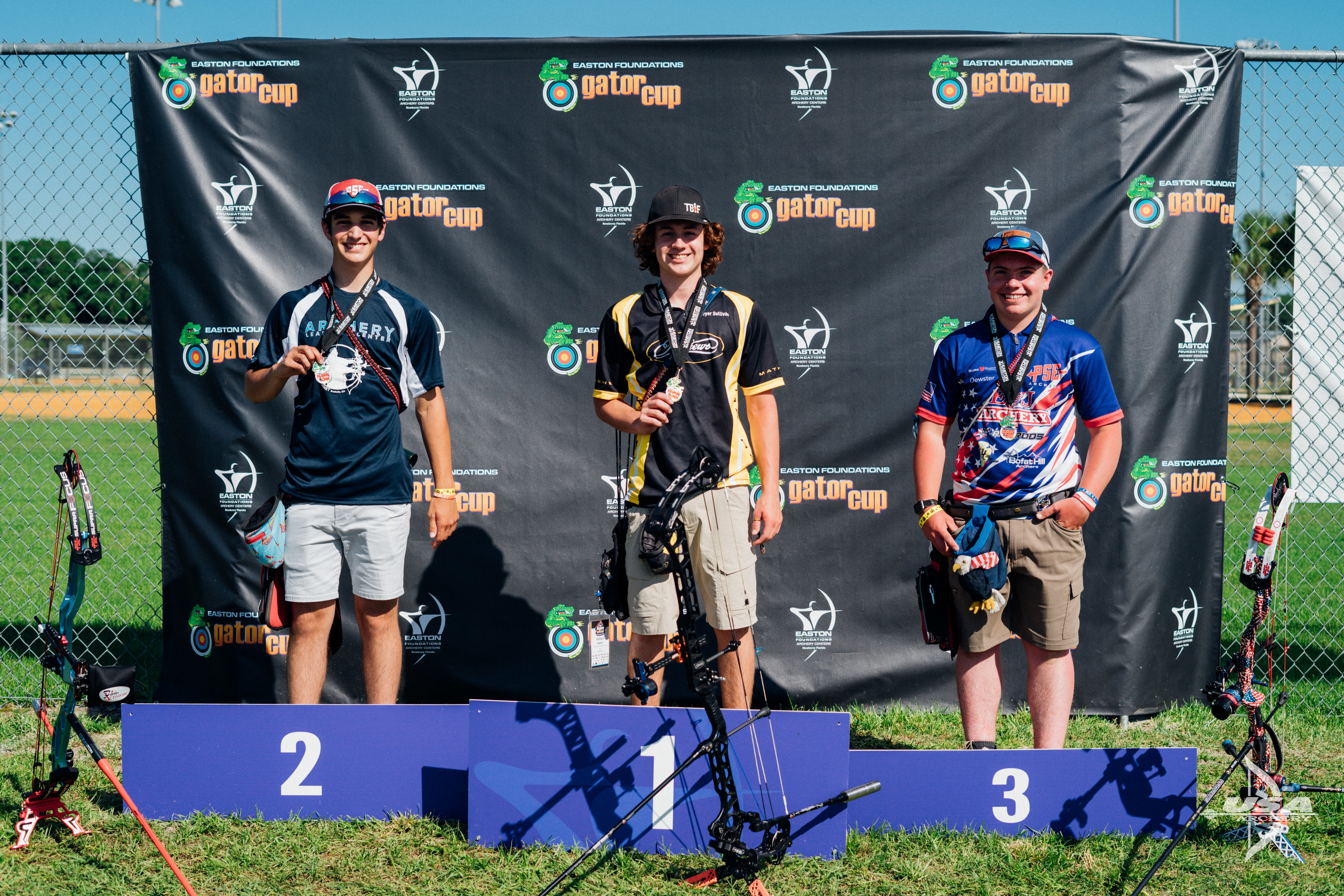 With this experience under his belt, Sullivan plans to make his debut in the senior ranks this winter and to compete on the senior USAT circuit in 2022. His future goals include shooting archery in college and making the world team as a senior.

“USA archery has been such a huge part of my life,” shared Sullivan. “The whole staff and community have made this journey so great. My parents often remind me to enjoy the moment: just step back and take it all in. I feel so lucky to have met so many amazing people, made life-long friends, and I hope this adventure continues! Thank you to my ‘village’ near and far. As the boys and I like to say, ‘Full Send or no Send!’”

Sullivan’s advice: “To all the young archers out there, don’t give up. Fight for it. Work for it. And most importantly, it’s not about winning, medals, and trophies, it’s about the moments, the memoires, and the people.”