DUBLIN, Ohio – The 135thU.S. National Target Championships and 2020 U.S. Olympic Trials – Archery, Stage 1 wrapped today with the second 72-arrow scoring round. National champions were crowned following some of the best weather USA Archery has seen at an Outdoor Nationals and many new national records were set in an exciting day.

Team USA has locked up one men’s and one women’s spot for the 2020 Tokyo Olympic Games so far, with World No. 1 Brady Ellison earned the first spot at the World Archery Championships in June and Casey Kaufhold earned the women’s with a mixed team win at the Pan American Games just days ago.

The defending National Champions Ellison and Kaufhold took the wins again today with huge margins over the rest of their fields and definitively lead the Olympic Trials process thus far.

Kaufhold broke the double 70 national record with a 1314, taking the win over Eliana Claps by 17 points, while compound superstar Crystal Gauvin pulled a big bronze finish with a 1276 on the Road to Tokyo.

Kaufhold commented: “There was more wind today, so I made sure I was cautious, paid attention and still made the good shots I made yesterday. Some were in, some were out, but I tried to focus on the positive, keep going, and I didn’t know the previous record and am glad it wasn’t in my mind to put pressure on me.” On leading the Trials, she added: “It’s definitely a confidence boost and a relief and I’m happy to pick up the bonus points for a good start.”

Ellison agreed: “I felt like my shot was a little off the first half, I was still catching some but it wasn’t quite there and then as soon as the wind started blowing, I started shooting better. It was a weird wind on the field today that not a lot of us saw, but still a lot of people were shooting pretty good. I’m happy to win another one, happy to be leading Trials, but wish I could have shot two 680s instead of 670s but I’m feeling good and looking forward to Texas [for stage 2 of the Trials].”

Crowned National Champion, Louis Price took a massive win in the compound senior men’s division with a strong 1426, while Matt Sullivan and World Champion James Lutz took silver and bronze with 1415 and 1413 respectively. World No. 1 Alexis Ruiz won another National Champion title, clinching victory in the final arrows after a multi-way tie headed into the final end. Ruiz’s 1388 pulled ahead of Sophia Strachan and Savannah Vanderwier’s 1386s: “Yesterday went really good. Today started really slowly, I lost the lead, so I told myself to put together a good six ends to finish it out, changed my mindset and it went a lot better. I don’t like to know the scores, so after the last end, everyone was hugging me, and I was shocked to find out I won after the start I had today. It feels amazing to know that I could have not the best day and still come out on top.”

“It’s a very long grueling two days, so it always feels good to get this one – I haven’t always had the greatest success at this event,” shared barebow senior men’s National Champion John Demmer III. “The key is to always stay focused as long as you can because it is a very long two days.”

Demmer’s 1326 topped the field by a massive amount and set a new national record – John Dillinger finished with silver and 1265 and Jason Lintner won bronze with a 1223. Claire Xie made her national target debut this weekend and won the women’s gold with a national record 1200 over Susan Snider’s 1186 and Melody Richards’ 1168. 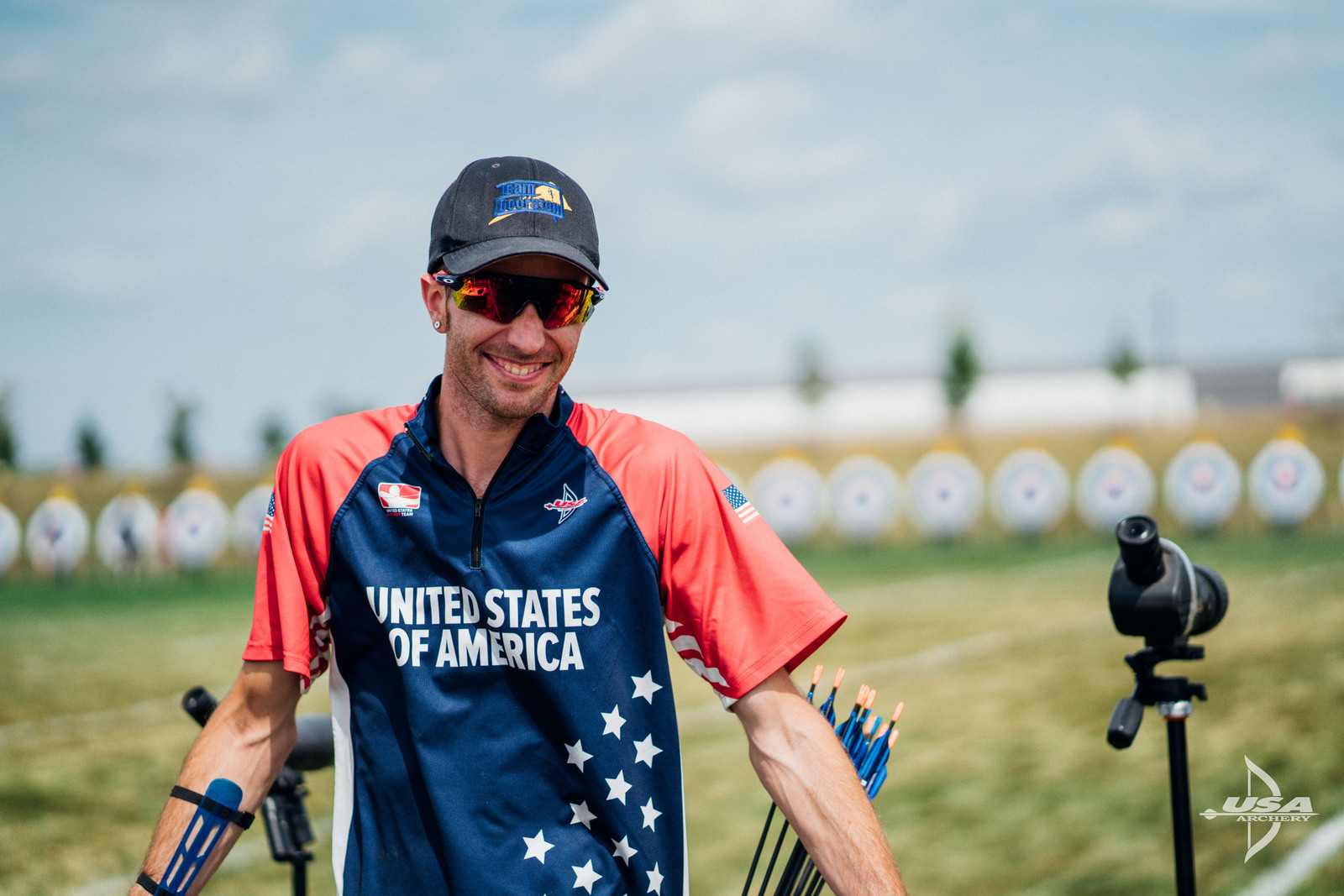 Impressive wins in many of the masters and para categories also included national records. New father Timothy Palumbo broke the recurve open men’s record with a 1246 and Emma Rose Ravish broke the recurve open women’s with a 580 today, earning her minimum qualifying score for the 2020 Paralympic Games and shattering her personal best by over 60 points. “Coach MJ Rogers helped so much with working on my bow arm pressure, and just keeping at it,” commented Ravish. “It feels absolutely incredible to win this event, it was a great day.” W1 Jason Tabansky also set a new record with a 1224 finish.

Linda Klosterman had a big 20-point record to win the compound masters women 50+ division with a 1350: “I struggled through three of the rounds and only had one mediocre round, so I didn’t realize it would be a record. I think I won this tournament in like 1994 or something, when it was the old style FITA round, but I started shooting some again in 2012. It feels good to finish with the win.” Scott Rissinger also broke the recurve masters men’s 50+ record with a 1286 win.