In eight editions of the World Archery Youth Championships, the U.S. has held the compound cadet women’s team gold all but once, finishing with silver in 2017. Today, they reclaimed the gold, bringing top honors home for Team USA.

In the first six arrows, Russia ran out of time on an arrow, while world record holder Faith Miller, Raegan Bender and Mackenzie Weatherspoon opened with a strong 57. It was over from there – with a ten-point lead the USA girls had it in the bag and finished 230-223 to win.

“It's a huge accomplishment for all of us,” said Miller. “We worked so hard and so dedicated to the sport, and it's incredible to get here.” 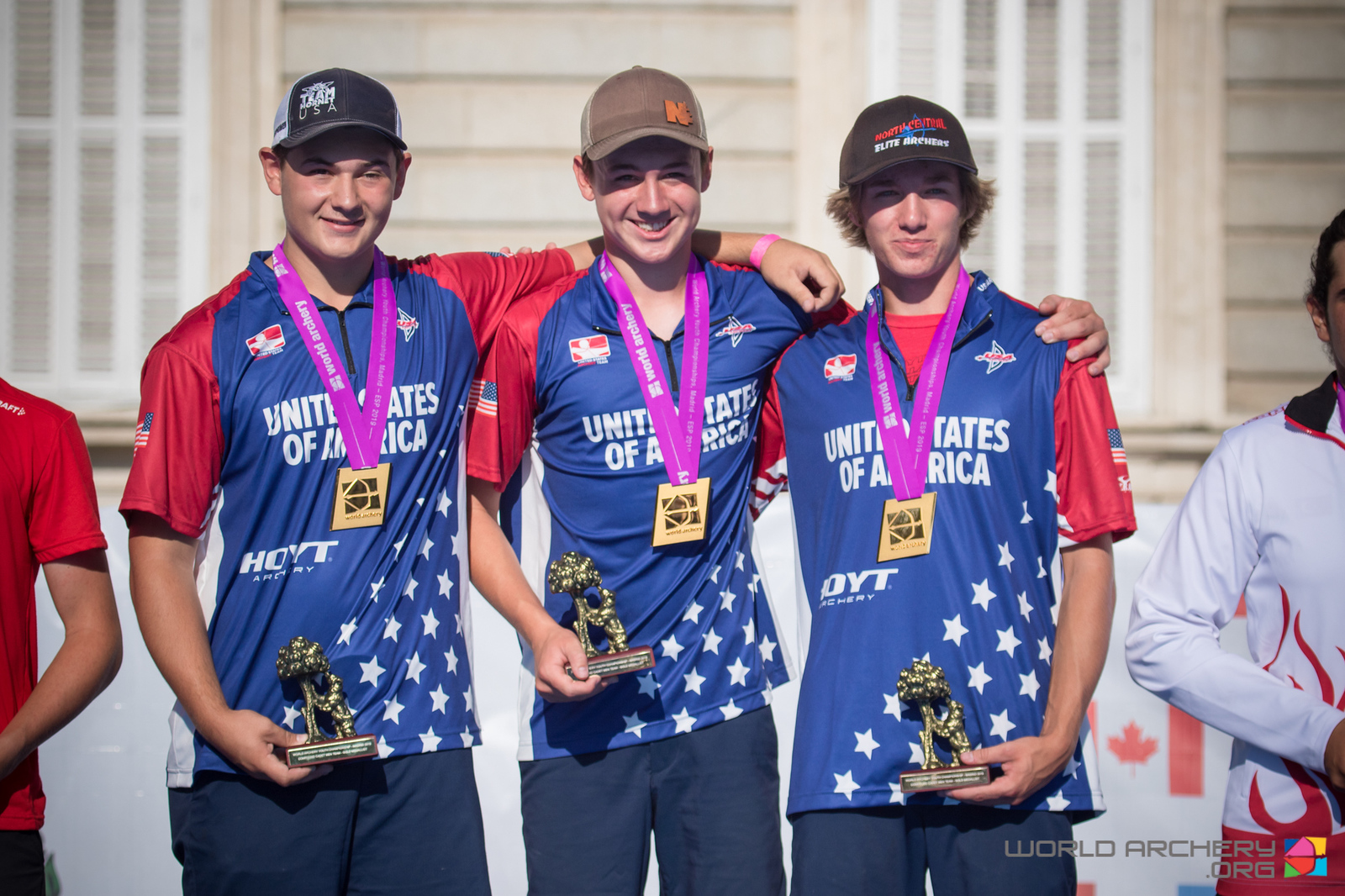 The USA compound cadet men also secured a big gold win over the top ranked team from Denmark. Cole Zeug, Matthew Russell and Sawyer Sullivan, all new to the world stage, had an impressive performance all week as a trio, filling big shoes as defending world champions. On the big stage, they steadily built an advantage in the gold final to win 227-223.

“I’m so excited. It's awesome! Absolutely, the girls’ gold motivated us more. We wanted that gold really bad,” said Sullivan. “I knew there was a chance to win gold when I arrived in Madrid, but we had to work hard for it.”

Zeug and Weatherspoon returned to the finals stage for the mixed team final, where they finished with silver to Mexico 154-152. Miller also contested the women’s bronze final against Italy’s Bazzichetto; Miller opened down with a 26 but came back to force a shoot off following a 141-all tie. Bazzichetto took the win and Miller finished fourth. The compound junior women’s gold final against Russia was intense, going back and forth each end with single-point swings. The final six arrows came down to several arrow calls and with Team USA catching the lines they needed, World No. 1 Alexis Ruiz, Anna Scarbrough and Savannah Vanderwier clinched the win 230-229.

Cooper French, Connor Sears and Curtis Broadnax also contested the team gold against Mexico. The minute they stepped onto the stage, they were dialed in with a strong 59 and a five-point lead. In the second end, the team had a few yellow cards, but it was no concern, with so much spare time, they closed with three perfect 10s to build an eight-point lead, 117-109. Finishing out 233-223, they claimed the gold and solidified the podium sweep for all four USA teams.

French, who was clean through the team final until a 9 on his final arrow, returned to the stage for the individual bronze final against Mexico’s Olvera Mendez. Incredible groupings and solid shots gave him an impressive 147, but Olvera Mendez matched and the two went to a shoot off, where French’s 9 was not enough to beat a 10 and he finished fourth. Ruiz also contested the individual bronze for the compound junior women against Italy’s Roner. Roner climbed from a 25th place seed and was a dark horse competitor. Despite an early lead for Ruiz, Roner claimed the last spot on the podium 144-140.

Competition concludes tomorrow with the recurve finals, where Jack Williams will compete for the world title and the recurve cadet mixed team will shoot for gold. Complete results are available at www.worldarchery.org. For more, follow USA Archery on Facebook, Twitter, and Instagram. Photos by World Archery. Some information attributed to World Archery Communication.