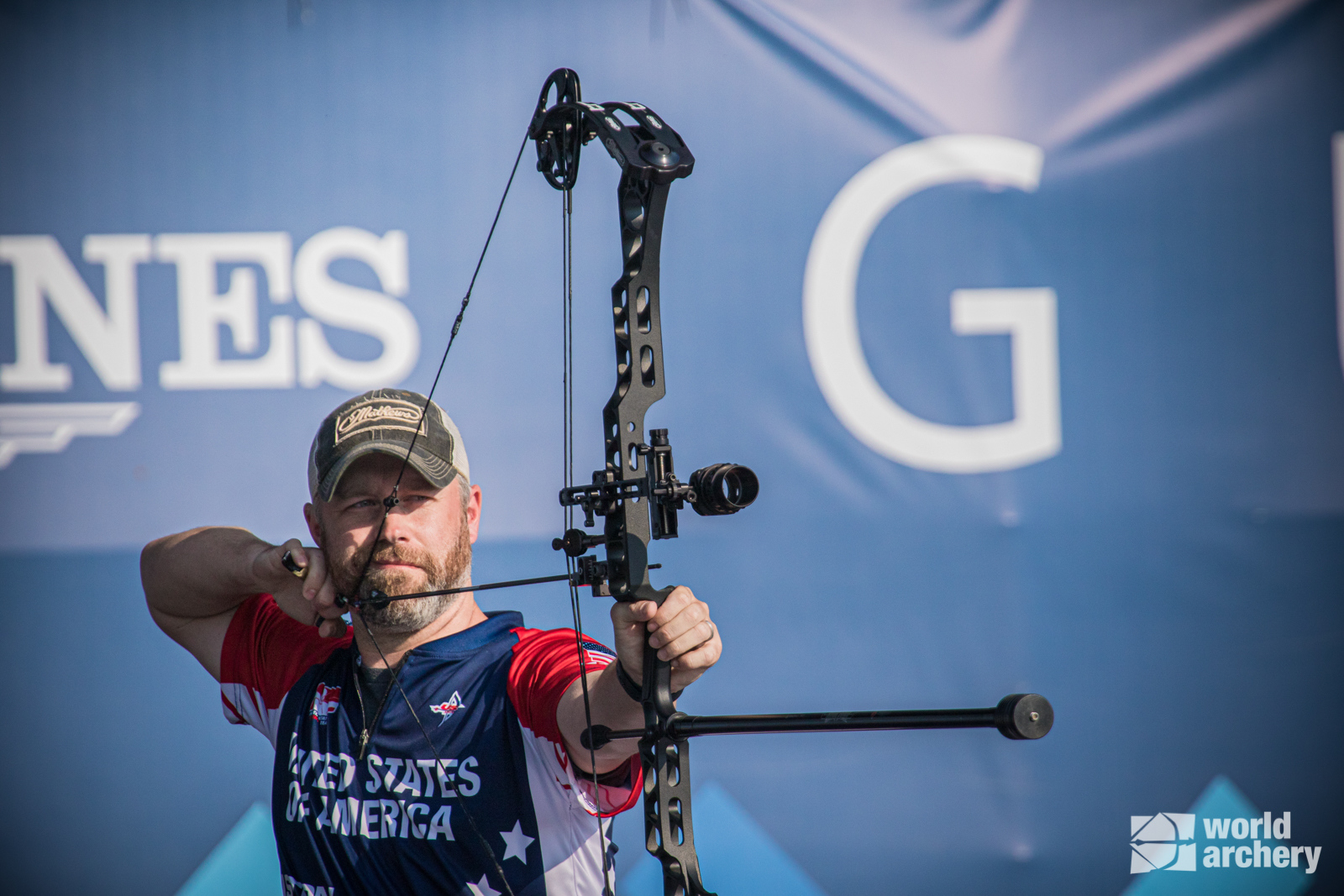 GUATEMALA CITY, Guatemala – In the return to international competition, Guatemala City hosted the first stage of the 2021 Hyundai Archery World Cup. With fantastic conditions, USA archers qualified high, shot strong through matchplay and are coming home with some big wins.

World No. 1 Braden Gellenthien ranked a close second behind the Netherlands’ Mike Schloesser and outshot him for gold, 148-146, to win the compound men’s title and secure an automatic qualification spot for this year’s Final. For Gellenthien, the most decorated archer on the circuit, this will be his ninth final in fifteen editions of the event.

Two-time circuit champion Gellenthien secured his spot in the gold final after pulling ahead halfway through a tied semifinal match. He told World Archery, “I really didn’t know what to expect. It’s been a long lay-off, almost two years since we’ve been shooting World Cups, so the nerves were there a little bit more in the first match than I would have liked. But I got through it. I handled them well.”

Kris Schaff joined Gellenthien on the podium with a bronze finish to start another successful season. Schaff took Schloesser to a one arrow shoot off in an impressive semifinal where both posted 147s, before a 146-145 narrow final victory over Slovakia’s Bosansky. “We just worked so well together yesterday,” Pearce commented to World Archery on the preliminary matches. “It was really smooth, and I was pretty confident we were going to go out there and do the same.”

“Definitely, I feel like it was a little bit hard, especially after not shooting for this long and then shooting against Mexico,” added Ochoa Anderson. “I have great teammates, and they were shooting really good. It feels really good.”

The U.S. compound men also climbed the podium in the medal ceremony, having captured the bronze earlier in the week.

Ruiz returned to the stage in individual competition along with teammate Savannah Vanderwier in her circuit debut. Vanderwier, who has had success internationally in youth competition, and Ruiz, who medaled at every world cup stage in her debut season in 2019, were both hungry for wins.

Denmark’s Tanja Gellenthien was near perfect in her semifinal, scoring a 149 to advance over Vanderwier, and 10th seed Colombia’s Nora Valdez took 3rd seed Ruiz to a one-arrow shoot off and surprise upset. 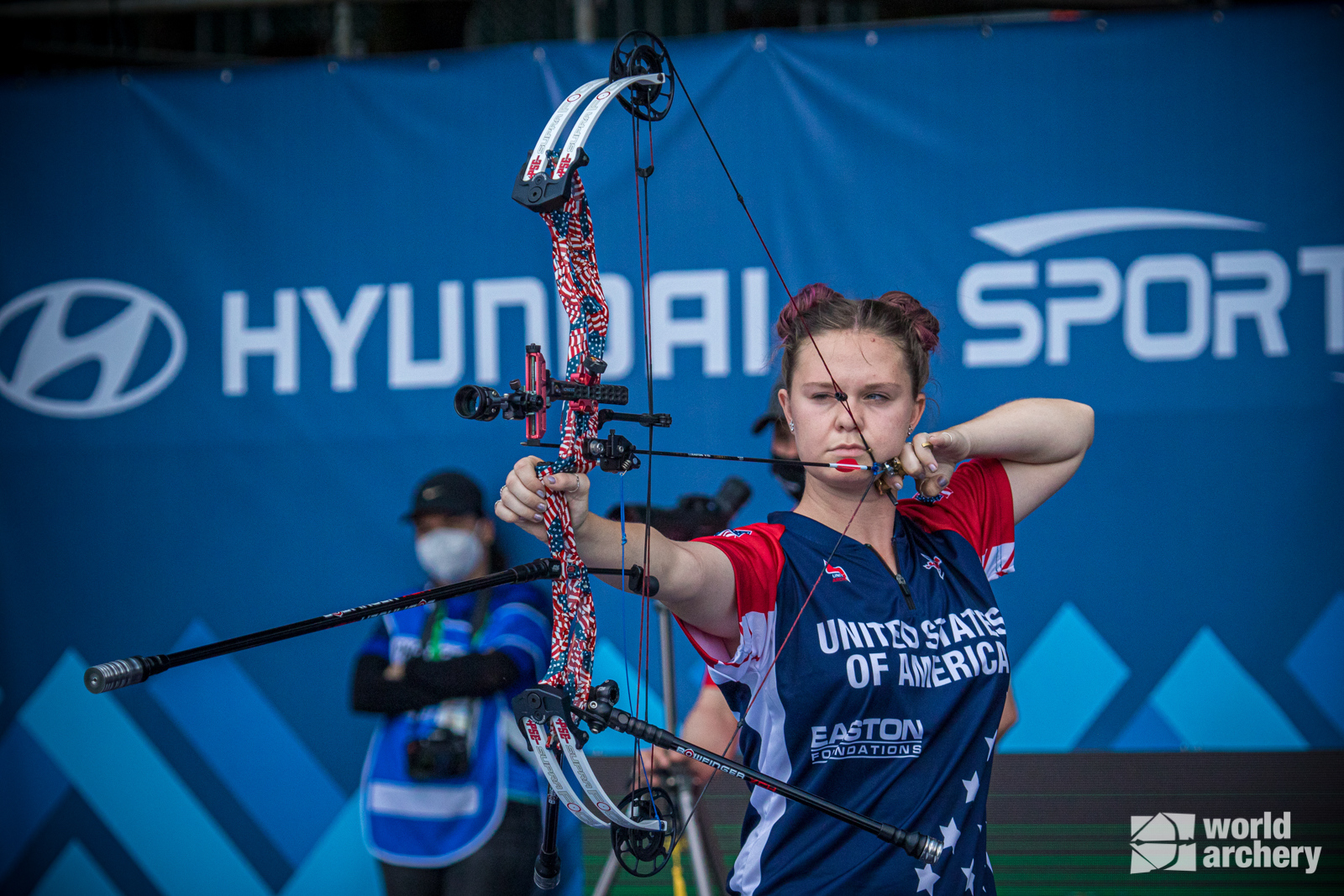 Vanderwier, who also took out top seeded teammate Pearce earlier in match play, then rallied to beat Ruiz for the bronze 143-141. With a start much like Ruiz’s in 2019, she commented: “I really enjoyed the final matches, and to win a medal, I think it’s really cool. First World Cup and I made the podium? That was a huge goal for me, so achieving that is pretty cool.” In today’s recurve finals, Mackenzie Brown secured her first individual podium finish since 2015 in an impressive tournament. She climbed from an 8th place qualification to the final four through several close matches and intense shoot offs. Romania’s 20th seed Amaistroaie took her to another shoot off in the semifinals, where Brown’s 8 was closer to the center.

Shooting against top talent Deepika Kumari of India for gold, Brown again took the match the full five sets to a shoot off. Both archers scored 9s, but Kumari’s was closer to the center for the win as Brown finished with silver. World No. 1 Brady Ellison led the recurve men’s and mixed teams to the finals stage this morning. With rising talents Matthew Requa and Josef Scarboro, the men’s team, which has yet to secure full quota spots for the Tokyo Games later this summer, seeded first and shot their way to the gold final. Spain took early control of the match 4-0 and never let up as USA finished with silver.

Ellison and Kaufhold also shot for mixed team bronze where the No. 1 seed met No. 2, India. After an initial lead for the U.S., India pulled ahead to win 6-2.

Complete results from this week’s competition are available here. Finals match videos are available on World Archery’s YouTube channel and the Olympic Channel.