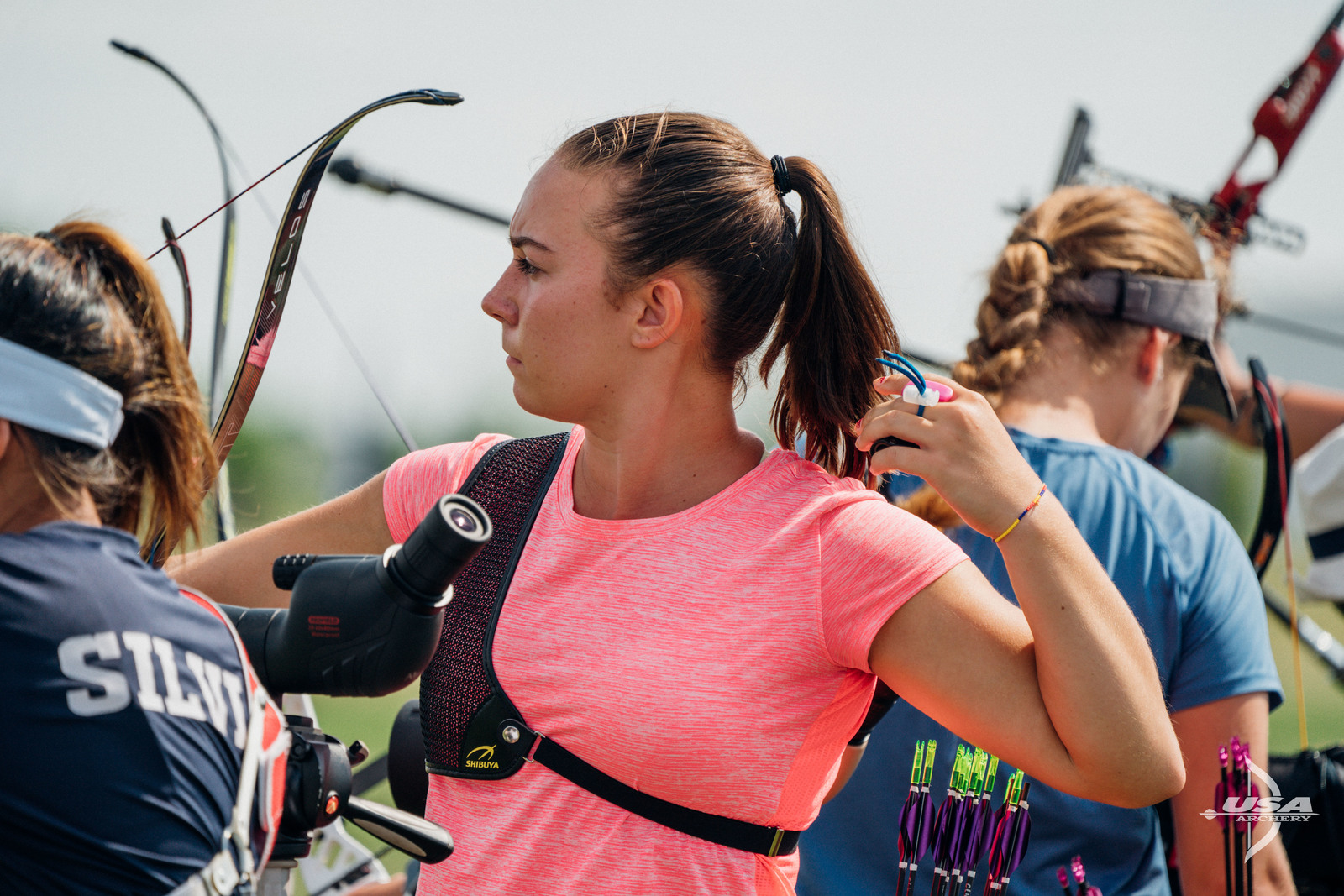 DUBLIN, Ohio – USA Archery’s 135th U.S. National Target Championships and the 2020 U.S. Olympic Trials – Archery, Stage 1 began this morning with the first 72 of 144 arrows of qualification. The field, featuring 155 competition targets in a single line for over 500 archers, was hot and sunny with some tricky winds.

Leading the recurve senior divisions for both the Nationals and Olympic Trials are unsurprisingly World Champion Brady Ellison and Pan American Games triple-medalist Casey Kaufhold, who earned the quota spots for Team USA with major victories earlier this summer. Kaufhold’s 660 gives her an 11-point advantage over the rest of the field.

“Coming from Peru, I’m definitely riding on a high and I just want to keep the good attitude and positive confidence going,” shared Kaufhold. “I’m really happy that I was able to qualify a spot because it gives everybody here a reason to shoot so I’m really happy everyone is able to compete for that and I’m super proud and grateful to be here.” Ellison’s 677 unsurprisingly topped the field, but it was 16-year old, world youth team member, Josef Scarboro who is sitting in second with a 669, 11 points ahead of the third seed. “The first half went really well, I surprised myself. I came here with the mindset to just have fun and shoot well but I didn’t think I would shoot this well. On the line, I played myself; I know I have shot these shots a thousand times, it’s nothing new, just a new place. I’m very proud of how I did today.”

World No. 1 Alexis Ruiz pulled ahead in the final few arrows to lead the compound senior women with a 698. Ruiz’s teammate for the World Archery Youth Championships next week, Savannah Vanderwier shot a personal best 695 and is sitting in second. 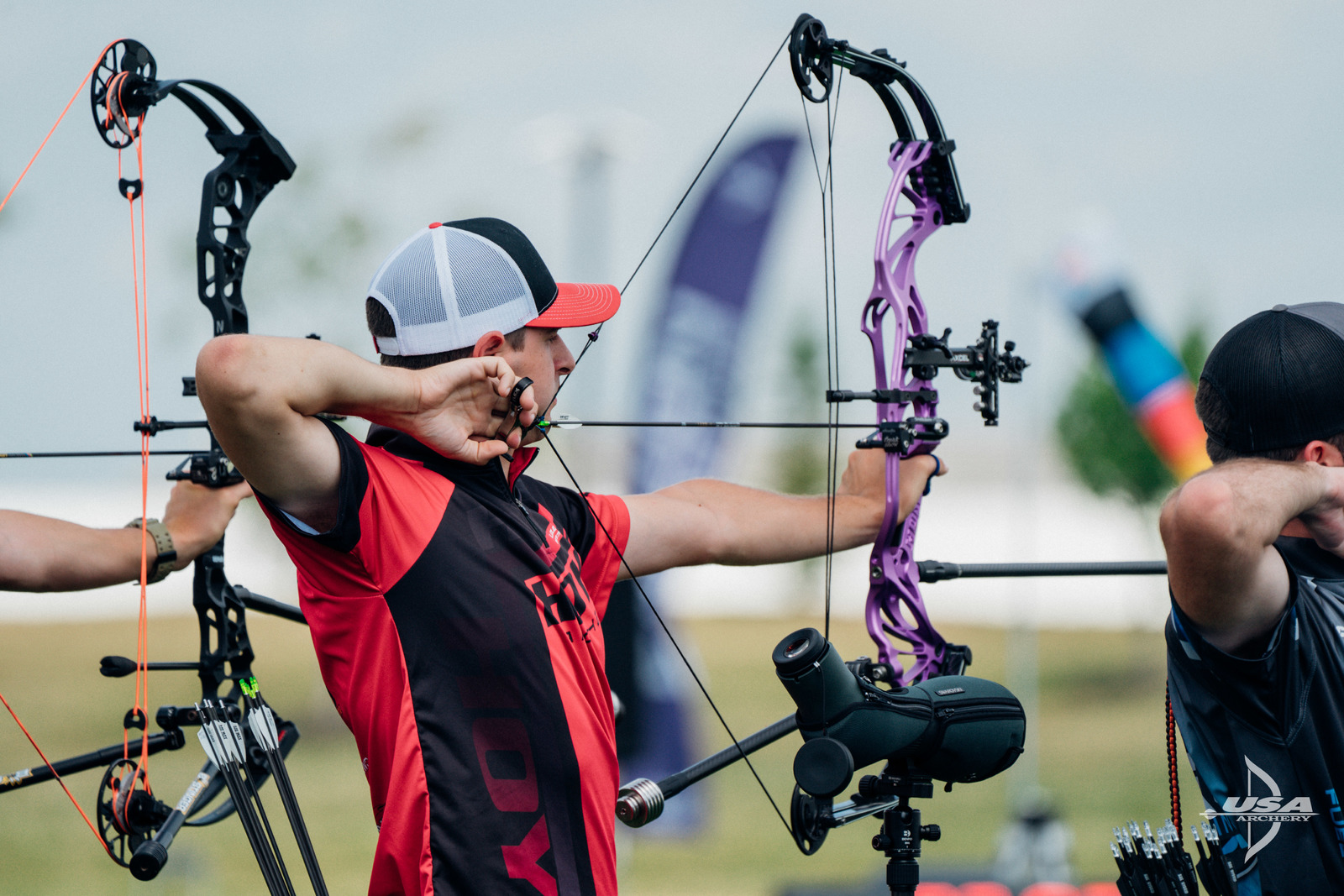 Louis Price also had a major personal best today, topping an extremely competitive compound senior men’s field: “Today went good, I shot a personal best, which was the best part. The first half I actually shot my personal best half with a lot of Xs, which felt really nice. Everything has been clicking at home; I just came to shoot and have fun, and it was a good time.”

Claire Xie topped the barebow women’s division at her national target debut with 618: “This is my first outdoor national tournament, so I was super nervous at first, but the second round I felt a lot better and shot my average. I’m having so much fun here and we’re all very close in the barebow division.”

Masters competition is stiff this weekend, with excellent archers and some legendary names in the 50, 60 and 70+ categories. Scott Risinger topped the recurve men’s 50+ scores today, but was more excited about shooting with friends and on target with the iconic Tom Saunders of Saunders Archery. Rissinger shared: “It was fun to shoot with Tom – this is the first time I’ve ever shot with him even though I’ve known him for years. The wind got me a little bit in the second half, but it was good overall.” Paralympic Champion Andre Shelby sits just ahead of World Champion Ben Thompson in the para compound open men’s rankings, and was very excited for the fun team rounds hosted in the afternoons at Outdoor Nationals: “I started out slow today but picked it up toward the end. I’m feeling pretty good; I’m going to shoot mixed teams this afternoon and then hopefully I’ll shoot a better score tomorrow and we’re looking to win the men’s team round!”

Competition resumes tomorrow with the second half of qualification to name the National Target Champions. Live results are available here. Saturday, the U.S. Open individual elimination matches showcase intense head to head elimination matches. Gold medal finals will be broadcast live on Eleven Sports network, and on USA Archery’s Facebook page via Competition Archery Media. This event is free and open to the public to attend. Light fare is provided for spectators and drink tickets are available for purchase. Daily photos are available on USA Archery’s photo site. For more, follow USA Archery on Facebook, Twitter, and Instagram.