MADRID, Spain – Team USA’s best young archers are through to medal matches at the World Archery Youth Championships following a long day of intense head to head competition. Overcoming challenging brackets, four individuals are competing on the world stage this weekend and several teams are in hot contention to bring home more medals.

World No. 9 Jack Williams has been a solid staple for USA Archery on the international circuit this year. Williams won team gold at the last edition of the World Archery Youth Championships two years ago, but this time returns to the stage to shoot for the individual junior recurve men’s world title. Williams seeded 10th but overcame tough competitors to earn a spot in the final, where he will face Korea’s Kim Hyeonjong, who outscored top seed, Turkey’s Mete Gazoz in the semifinals. 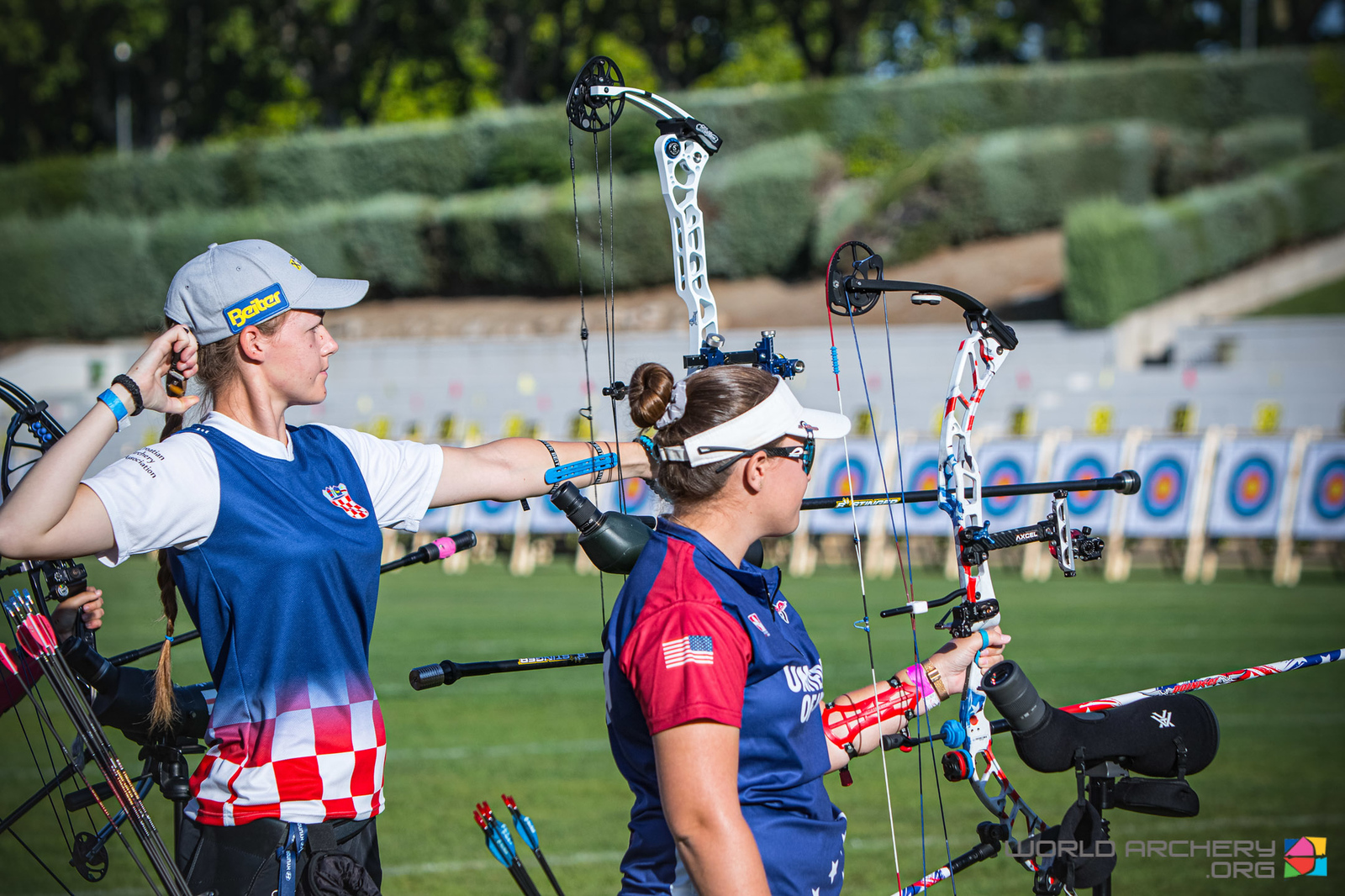 Defending youth world champion, World No. 1 Alexis Ruiz has medaled at every world cup this year and was a strong favorite to repeat with gold. Ruiz never dropped below a 147, shooting incredible scores to breeze her way into the semifinals. Shooting against Turkey’s Tomruk, Ruiz was down three after the first two ends, where Tomruk was clean. Ruiz forged a comeback but came up short 145-147 to advance to the bronze final. Ruiz’s teammate Savannah Vanderwier also had a strong run today, making the top 16 before falling 148-143.

Cooper French will also contest the compound junior men’s bronze after winning two one-arrow shoot offs in close matches on his way to the semifinals. Teammate Connor Sears also made it to the top 16 from a 20th place qualification.

Faith Miller, compound cadet indoor world record holder made her world championships debut with a 16th place qualification – knowing she had higher potential and determined to climb the brackets. India’s Chaudhary, seeded 32nd took out top ranked Quintero Garcia of Mexico in the 1/16th before Miller would have met her in the 1/8th. A 145-143 victory propelled Miller into the quarterfinals where she took a 5-point win before falling 140-144 in the semifinals to shoot for bronze. 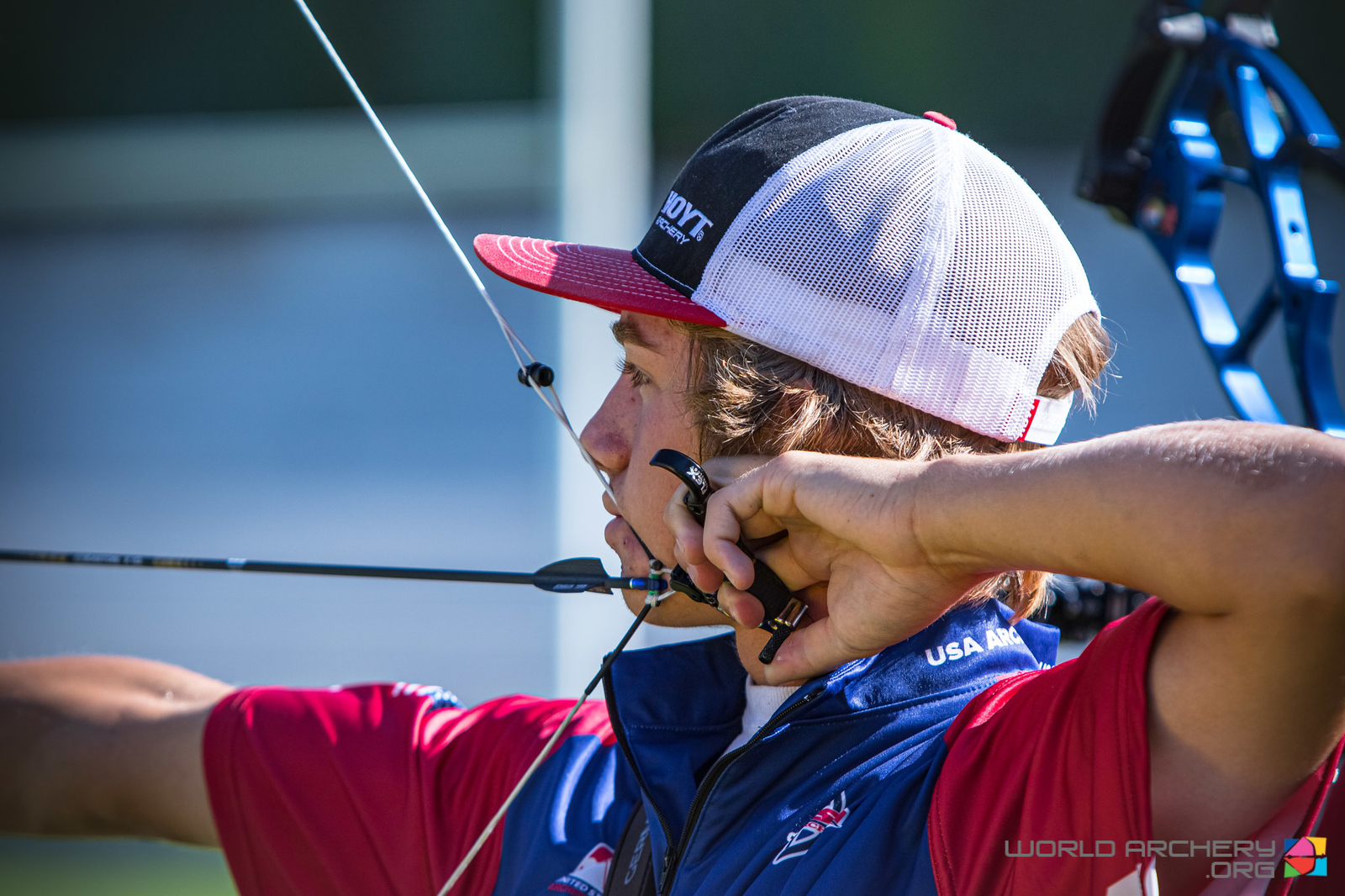 6th seed Cole Zeug made the strongest USA run for the compound cadet men, shooting his way to the quarterfinals, where he went out 144-148 to 3rd seed Kosenkov of Russia.

Team USA’s cadet recurve men featured a stacked squad of world record holder Joonsuh Oh, Youth Olympic Champion Trenton Cowles, and Josef Scarboro, who currently sits 2nd in the 2020 U.S. Olympic Trials. However, Oh and Cowles went out in their first matches; Scarboro seeded 8th to earn a bye into the 1/16th, and made a solid run to the quarterfinals, where he posted strong scores but was stopped 7-3 by Korea’s top seed Kim Je Deok. The 11thseeded trio posed an upset in the team 1/8thround, forcing a shoot off against Turkey, but was unsuccessful in clinching the win.

Cadet recurve women’s 3rd seed Casey Kaufhold, who has made several major international wins this year on the senior circuit, was upset early in the 1/16th 7-3 despite three strong final sets, while teammate Jennifer Mucino-Fernandez climbed from 19th to the 1/8th round where she was stopped on a one-arrow shoot off against Australia’s Paeglis, who took out Kaufhold the match prior. In the team competition, Kaufhold, Mucino-Fernandez and Catalina GNoriega were upset round one 6-2 by Spain.

Eliana Claps had the best run for the recurve junior women, making it to 1/8th from a 25th place qualification. In the afternoon, Claps and teammates Amy Jung and Alex Zuleta-Visser, the 4th ranked team were also stopped short in the quarterfinals 6-2 by Spain.

All four USA compound teams are through to the semifinals; Ruiz leads a strong junior women’s squad ranked No. 1 who will be tough to beat as competition continues. Team USA is the defending champion of the compound cadet men’s title. In the last match of the day, cadet compound mixed team Zeug and Mackenzie Weatherspoon advanced through the 1/8thby one point over Thailand.