The course featured four targets set on varying declines, inclines, and on a lift in the trees. New for this rendition of the Championships was the mixed team competition.

Reigning World Field Champion Pearce and two-time World Field Champion Cousins added another medal to their collection. The acclaimed duo maintained control of the match until the very end, ending with a score of 92-86 against Julia Boehnke and Henning Luepkemann from Germany.

“It was amazing shooting the first-ever mixed team round at the World Field Championships with Dave! He is such an accomplished archer that I had a lot of confidence in us as a team!” said Pearce. “They had a beautiful finals venue with some tricky shots, but we were able to remain calm and shoot strong throughout the entire match. It feels so good to win the gold medal on home soil! Both of us love field archery, and I’m happy we were able to make our country proud in the final!” 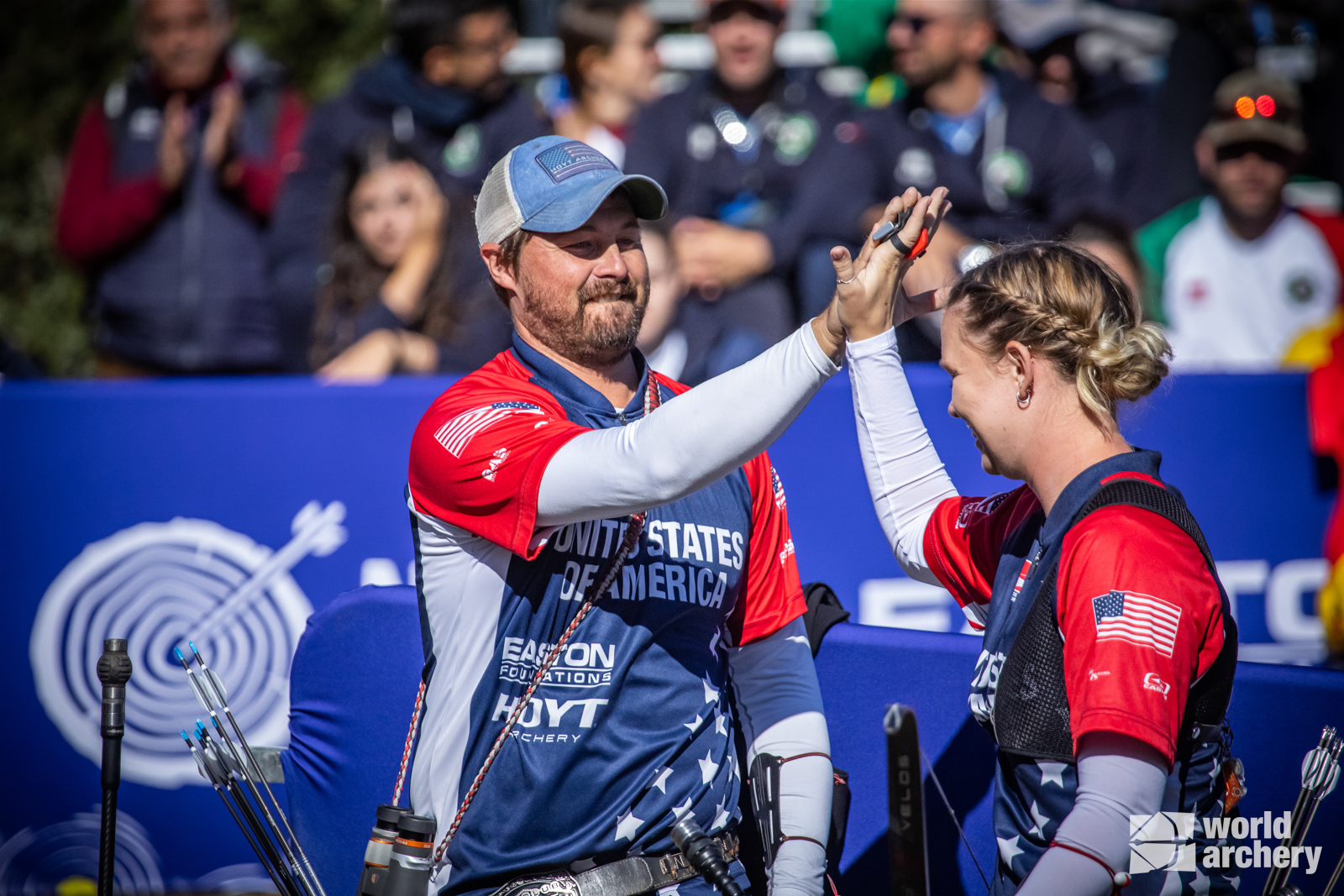 Savannah Vanderwier paired with world number-one ranked Brady Ellison for the recurve mixed team bronze medal match facing two-time Olympian Patrick Huston and Bryony Pitman of Great Britain. Vanderwier was on fire posting three 6s over the challenging course. The recurve mixed team went into the last target with a two-point lead over Great Britain. Ellison sealed the bronze medal after posting a 6, so Vanderwier’s last arrow only made the win official 76-72.

Vanderwier said, “The most challenging shot of the day was definitely the last target in the trees. It was a pretty steep angle and trying to keep my bow level was a challenge. But thankfully, I had Heather Koehl coaching and Brady watching for me. Those 6s felt great! I actually had a bee flying around my face on the first shot and all I was thinking was, ‘Just ignore it, shoot a good shot’ over and over. When the arrow hit the target, I heard everyone from the U.S. start screaming, so I knew it was a six, which definitely felt good!” 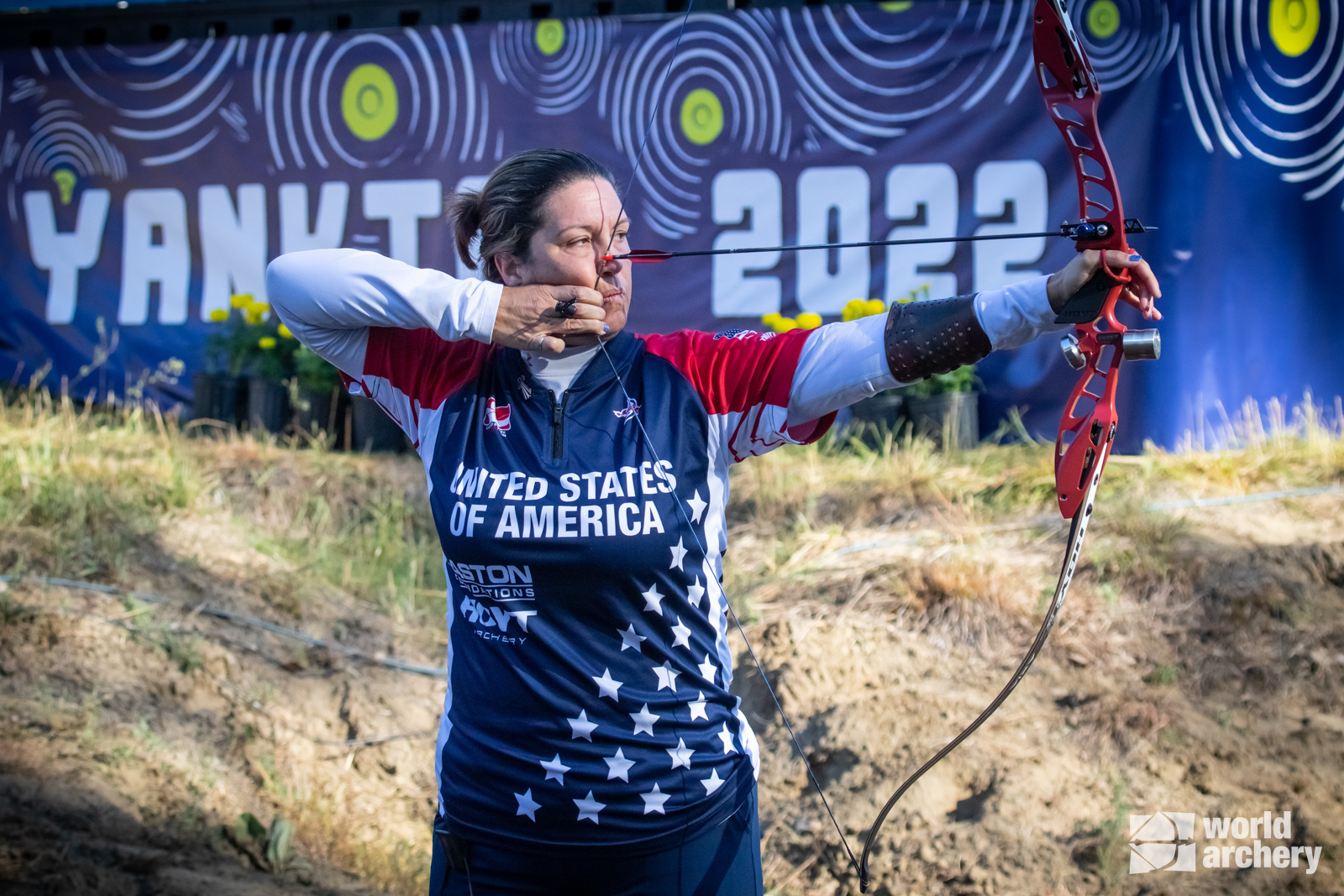 Matt Yacca teamed up with 2018 World Field silver medalist Fawn Girard for the barebow mixed team finals. The U.S. team faced Christine Gauthe and David Jackson of France in the bronze medal match. Yacca and Girard led by a single point all the way to the final end where they locked up the scores with only two arrows left per team. The final target was extremely challenging posted in the trees and with the sun in the athlete’s eyes. Unfortunately, a 3-4 to 4-4 wasn’t enough to maintain the lead putting the U.S. team in fourth place overall. When it came time for the men’s team bronze medal match, all three archers had shot the course earlier in the day. Unique to this competition, the men’s team is comprised of three divisions - Yacca shooting barebow, Ellison shooting recurve, and Cousins with the compound component. The U.S. led the match against Great Britain for the entirety finishing 58-52.

The championships conclude with the individual finals tomorrow. Fawn Girard will be contesting for the bronze medals followed by Matthew Nofel, Paige Pearce, and Dave Cousins all competing for gold. The finals will stream live on World Archery’s YouTube channel. Results are available on World Archery and photos are on World Archery’s SmugMug. Follow USA Archery on Facebook and Instagram for more from the event.