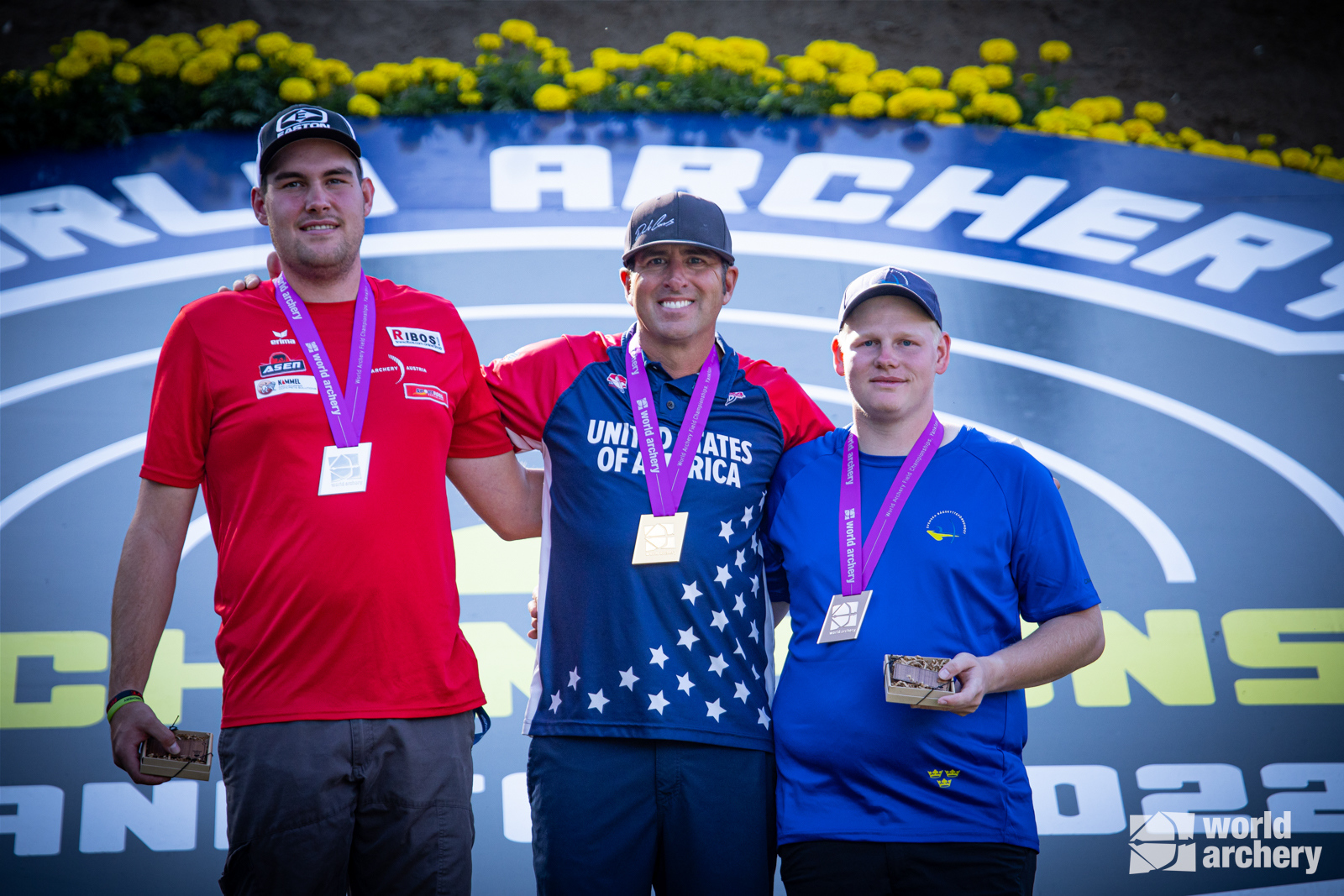 YANKTON, SD – Dave Cousins and Paige Pearce have both won compound gold medals at the 2022 World Field Championships. Their individual wins come a day after they won gold together in the mixed team competition yesterday. Matthew Nofel is bringing home the silver medal from the men’s recurve division, his first podium finish at a Field Championship. 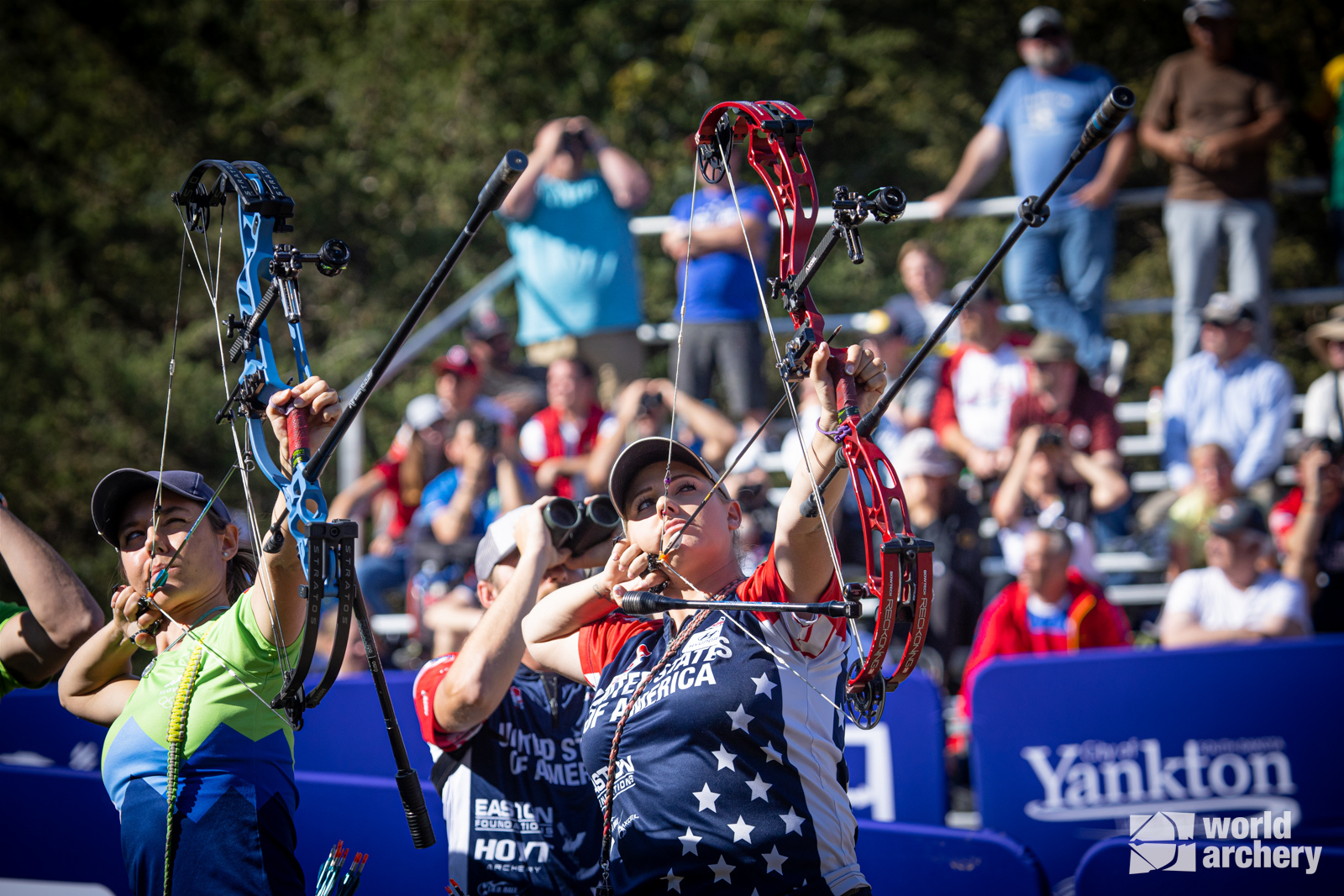 Defending World Field Champion Paige Pearce faced 2014 World Field Champion Toja Ellison of Slovenia. After starting with five 6s from each archer, Pearce dropped a single point which trended through the third end as well. Going into the final target, Ellison had a two-point lead before two 5s opened the match up for a tie at 70 points. Both athletes nailed the 6 in the shoot-off, but Pearce came in closer to the center for the gold medal.

“I can’t believe that it worked out that way, but I wouldn’t have expected anything less from Toja. I honestly went into this thinking we could have a shoot-off. We’re so neck and neck; she’s amazing. Honestly, I was thankful that was the last target because I knew we needed something tough if I was ever going to have her give me two points. I just told myself, ‘I have to hit all 6s to even have a chance,’ and I pretty much thought I was done even then. So, I did what I needed to do, and she happened to give me the two points that made it possible for us to have a shoot-off,” explained Pearce. “I’m just so excited. Field is truly my favorite part of archery. Obviously, I shoot indoor, target, all of the above with World Archery, but this title means more to me than any of them because this is what I love.” 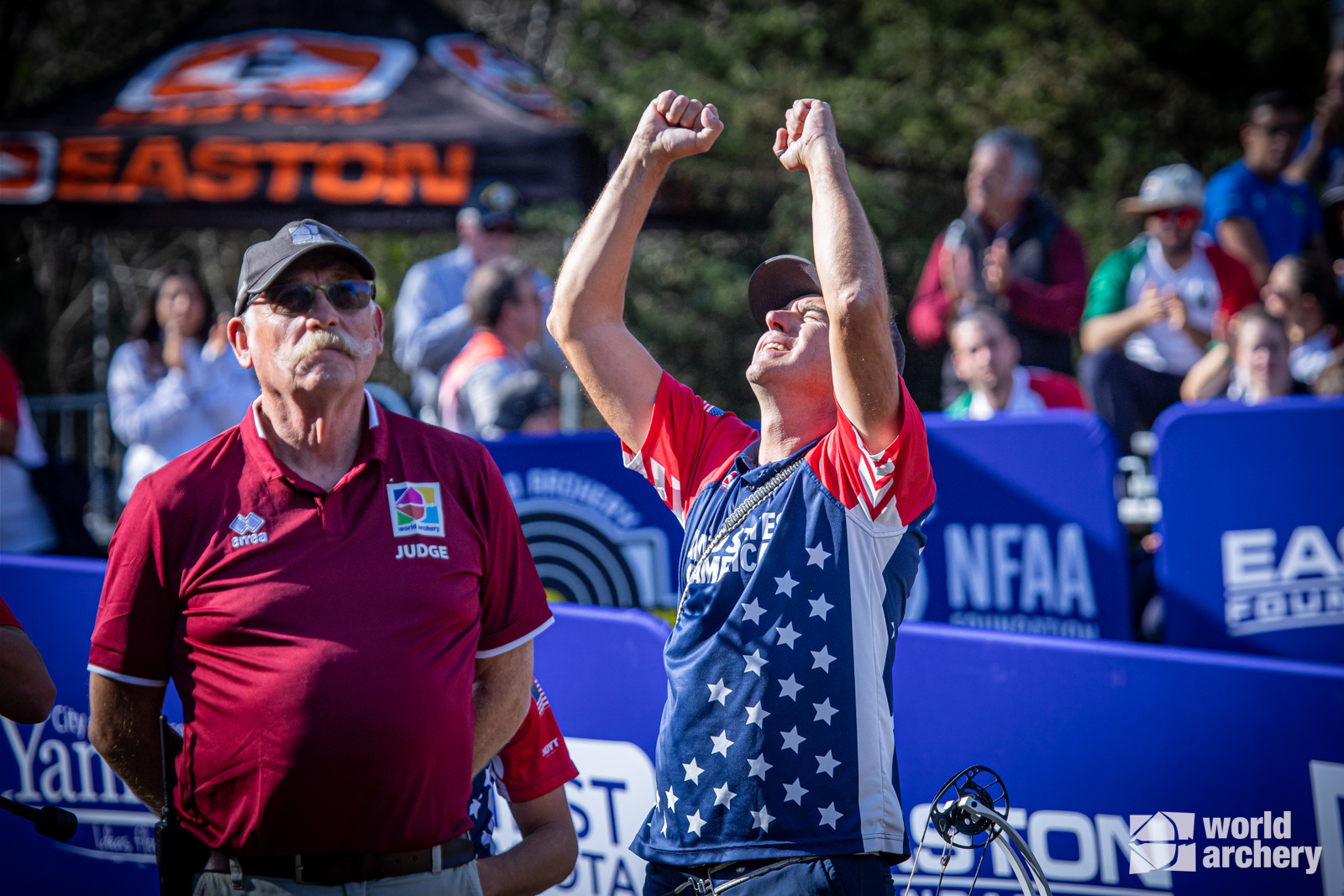 Cousins, who has multiple world championships to his name, faced Nico Wiener of Austria in the finals. The wind started played a factor in the final match of the day preventing the higher scores that spectators would expect from the top compound archers. Cousins had a two-point lead going into the final target before extending to win 65-62, adding yet another world title to his collection.

“My last world championship individual win was in 2013 at the World 3D. I went to the World 3D with one purpose in mind – to go win that tournament and be the only one that’s ever-won gold in all of them,” said Cousins. “So now to come here and win at a World Field on home soil – 24 years after my first World Field Championships – it does feel pretty good. The medal around your neck is great, but when you stand there on the podium and they play your anthem, there’s no better feeling.” 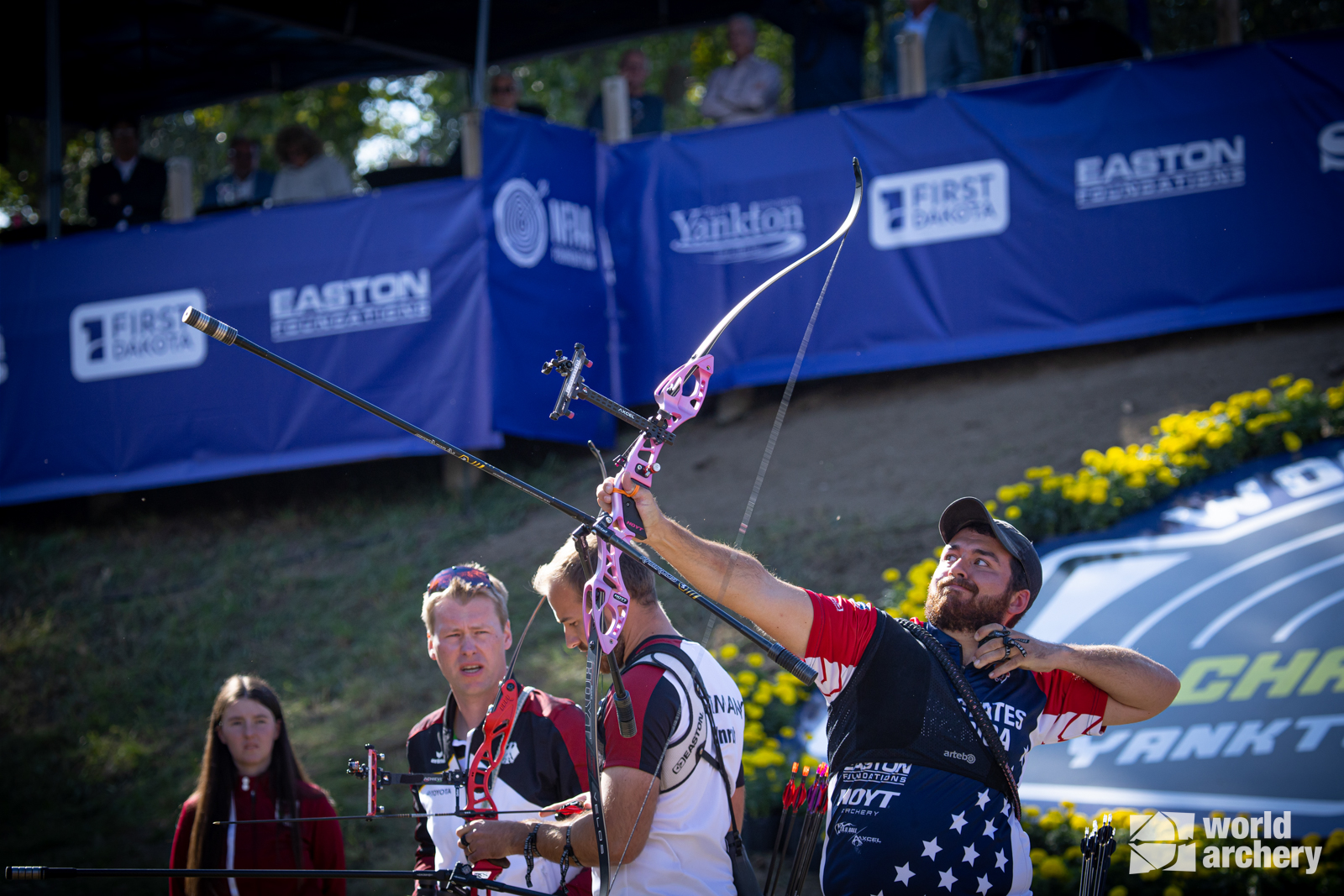 Matthew Nofel defeated teammate Brady Ellison in the semifinals 65-59 to advance to the finals against Florian Unruh of Germany. It was looking to be a tight match until the third end when Unruh began heating up. While Unruh was able to win the match before Nofel fired his final arrow, Nofel recovered with a 6 to cap off the match 54-57, securing the silver medal. 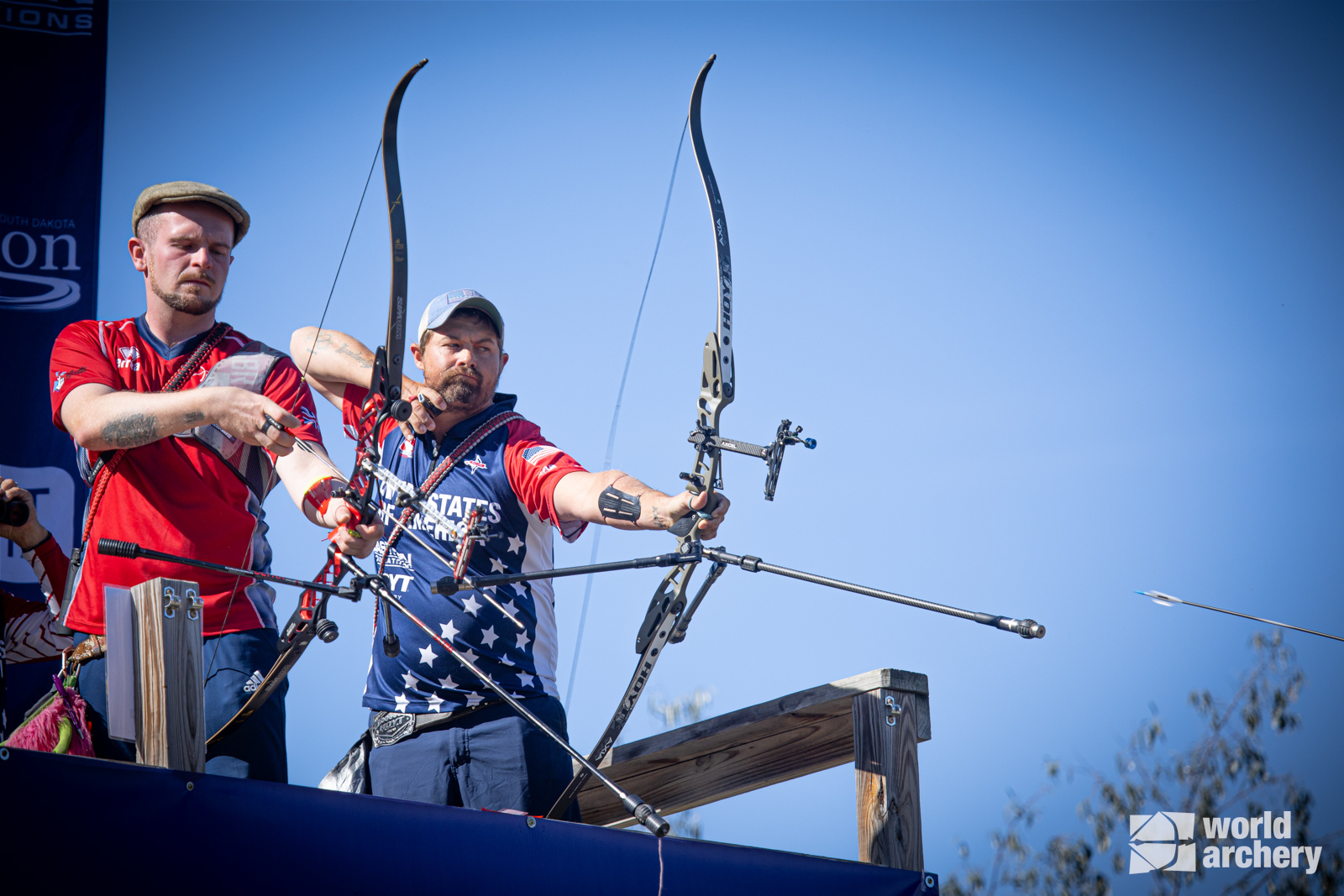 Two-time individual World Field Champion Brady Ellison faced Patrick Huston of Great Britain for the recurve men’s bronze medal. Ellison had already won two bronze medals yesterday in the mixed team and men’s team events. Archers went into the third end locked up at 30 points before Huston took a two-point lead. While both archers struggled on the final target in the tree line, Huston was able to nail a 6 claiming third place overall 60-57. 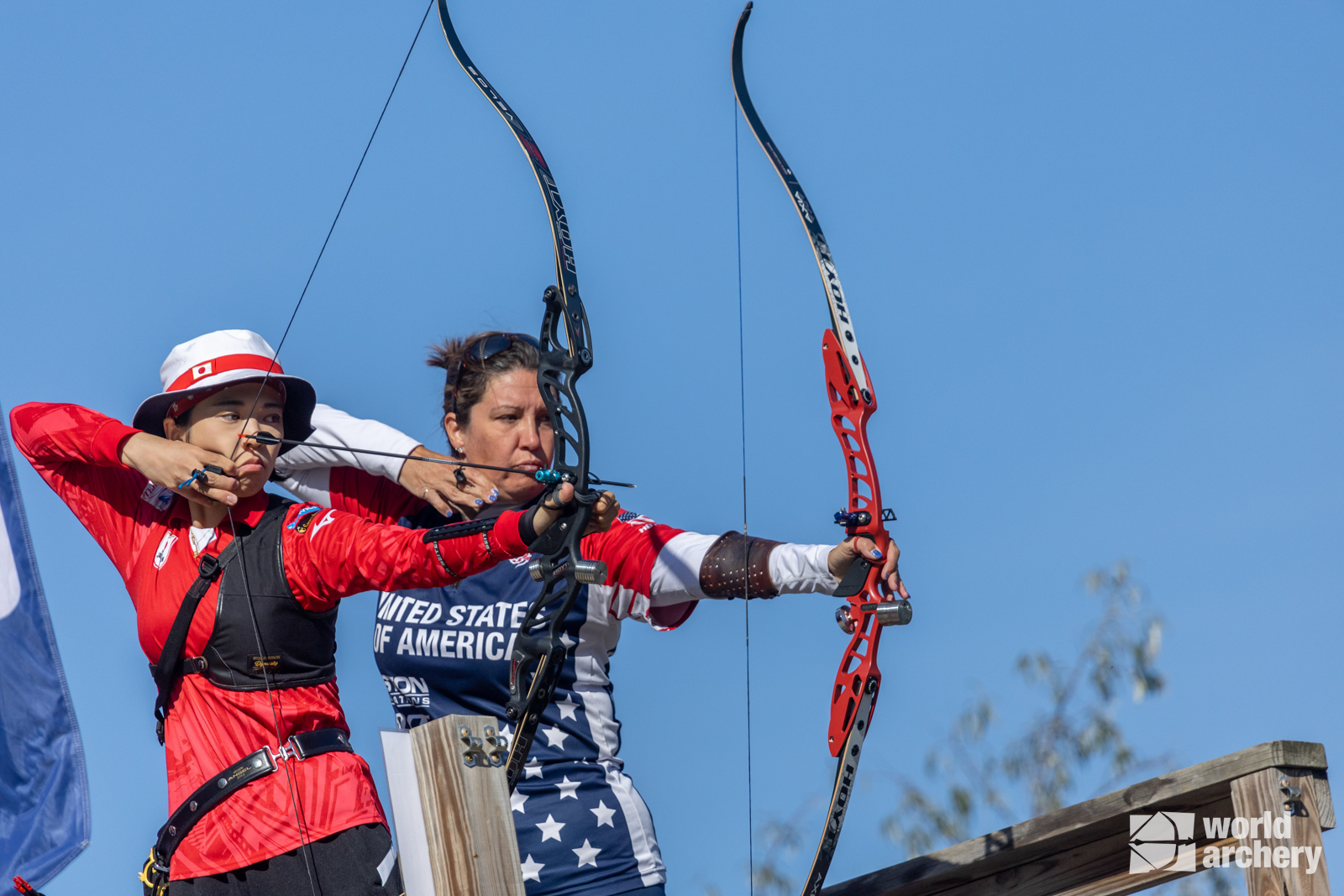 2018 Field silver medalist Fawn Girard faced Masaki Megumi from Japan in the bronze medal match. After both archers lost in their respective semifinal matches by a single point, Girard and Masaki were a competitive pairing. The two were tied 10-10 after the first end, but a couple of wayward arrows in the second end made it impossible for Girard to recover from a nine-point deficit. While she narrowed the gap, Girard took fourth 37-41.