For the Love of the Game: Bob Perkins Has Competed at All 50 Indoor Nationals

Pennsylvania’s Bob Perkins competed at the 50th installment of the U.S. Indoor Nationals in Lancaster, Pennsylvania, also his 50th event. Since inception in 1969, Perkins has not missed a single year, quite an impressive accomplishment for anyone, but especially for a family man in his 70s, credited to his love of archery competition.

Perkins began shooting as a young boy when he wanted to hunt with his dad. “I wanted my own shotgun, but my parents wouldn’t let me, so I asked for a bow and arrow for Christmas instead to try and stay out of trouble with that. I found an archery range in town where my father worked and I started shooting there.” Perkins joined a club in 1969 where he is still a member.

That same year, USA Archery hosted its first Indoor Nationals and there was a location close enough for Perkins to compete. “I just started doing that and I managed to make the shoot every year. There was one year I quit the second day, but I shot the first day so I’ve shot in all 50,” shared Perkins.

“It’s not like I’ve won any championships, but I consider myself a participating spectator. It’s nice as a hobby; I just kept shooting through the years when there was nothing else to do and I just got lucky enough to be healthy enough when the time came around to shoot all 50 of them.”

Perkins’ favorite part of archery is competing: “You meet all the good shooters, going to the nationals. When you compete in archery, you can shoot with the world’s best. Through the 70s was really nice because you had Darrel Pace and Rick McKinney, who were literally the world’s best. I’ve shot on target with Pace before, and I knew McKinney, so you get to interact with them while you’re just a regular Joe shooting. In a lot of sports, you can’t do that.”

Perkins says archery has helped him stay active and healthy: “It’s not heavy cardio, but you have to be in good enough shape to shoot 120 arrows in two days. I probably have been to the gym about twice in my life, so archery has kept me healthy through the years. There was a time in the 70s that I’d shoot 200-300 arrows a day to try and get a little better, and I still shoot 4-5 days a week.”

“Being 72 years old, I’ve seen a lot of people come back to archery after raising families,” added Perkins, “and then the masters group is growing more and more; it speaks to the age stretch that people can do archery, and you can first start at a later age too. Archery is one of those things that’s always been around for me.”

USA Archery shares our sincerest appreciation and gratitude for Bob Perkins and the many decades he has dedicated to the sport. 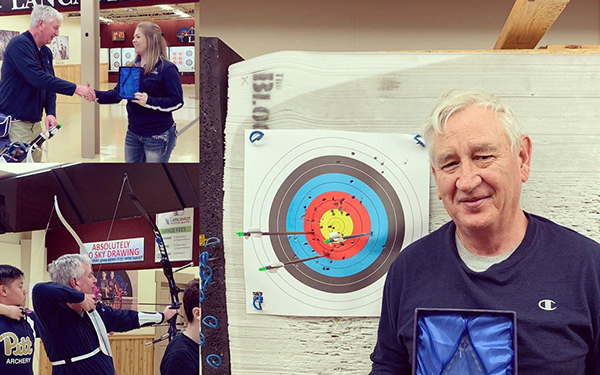