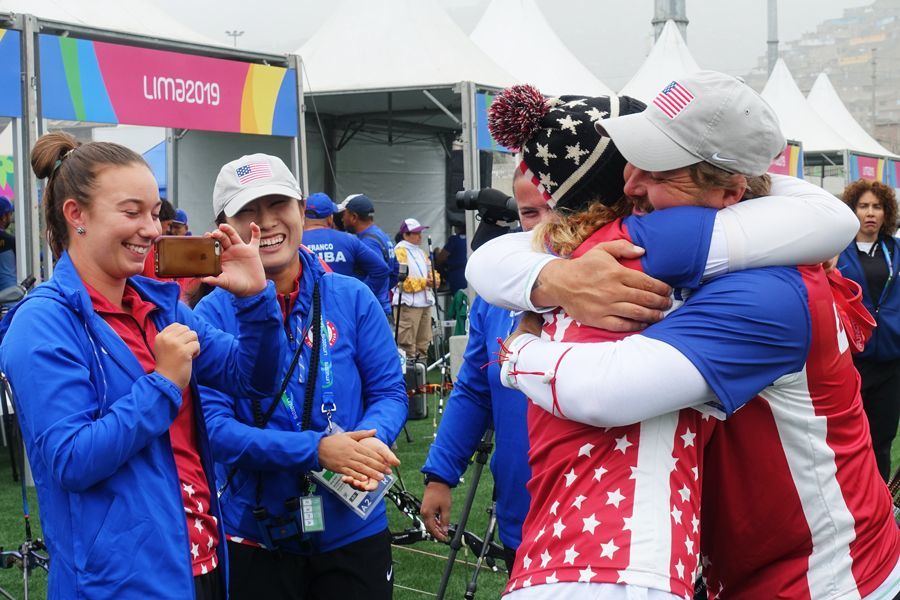 LIMA, Peru – The Pan American Games is a prestigious multi-sport continental championship that runs every four years in the year prior to the Olympic Games. Recurve archery is on the program for the 11th time, and compound archery makes its debut this year, as a step on the path toward Olympic inclusion. Like the Games, athletes from all sports reside in the Athlete Village and with Olympic quota spots on the line in many events, the atmosphere is intense and exciting.

World Champion Brady Ellison posted a 708 in practice yesterday, putting the world on watch for a new record. Since Rio 2016, no one has broken a 700 in competition, until today. Ellison’s smashing 702 raised the bar and put another notch on the belt of his most incredible season to date.

“I finally got it,” commented Ellison. “I have been shooting some amazing scores in practice and when I stepped onto the field today, I knew I had the weather. I’m not going to lie, I was nervous at the start, but I just had the feeling that everything was going to hit today, and I would break it.

“I had a 56 to close out the first half and that made me a little mad. I wanted a big first half so I could relax but I just shot a 350 and knew I had to keep pushing and make every arrow count. I shot back to back 60s in the second half and just relaxed. I knew I had it then. The last end I wanted a 60. My first 3 arrows were tens. I knew I only had to hold gold and just shoot one good one at a time and I would get it. Those were the 3 hardest arrows I have shot. I shot 9-9 then the last one I just smiled and told myself ‘you got it bud. Just shoot a ten and make it better.’ The last arrow went off very middle and I knew it was good. 702.”

Jack Williams also had an incredible morning, scoring a personal best 689 to seed 3rd and teammate Tom Stanwood was 8th with a 666, putting Team USA solidly in first with a new continental and Pan American Games record of 2057 (previous continental record was 2032 and Pan Am record was 2006).

A personal best 662 for 15-year-old Casey Kaufhold, the youngest archer at the Games, put her 2nd for the recurve women behind Mexico’s Alejandra Valencia. Teammates Khatuna Lorig, the defending Games Champion, and Erin Mickelberry were 6th and 8th with 642 and 636 respectively, and put the team 2nd behind Mexico.

Kaufhold and Ellison’s combined 1353 also set a new continental record for the mixed team event, which also makes its Games debut in Lima and will make its Olympic debut next summer in Tokyo. This is so critical because a gold finish in the mixed team event here will guarantee Team USA a women’s spot for the Tokyo 2020 Games along with the men’s spot earned at the World Archery Championships earlier this summer.

“Multisport events like the Pan Ams or the Universiade, where all the athletes from every country and sport are together, show what the sport could be like at the Olympics,” Gellenthien commented to World Archery. “I’m very excited to be a part of it, to be at the forefront.”

World silver medalist Paige Pearce qualified 4th today with a 695 and is sitting 2nd for the compound mixed team event with Gellenthien.