MALVERN, Pa. – The 138th USA Archery Target Nationals opened with the first day of qualifications and mixed team eliminations. After storms blew through the area overnight, archers were greeted with a beautiful day for competition.

Paige Pearce shot right up there with her personal bests scoring a 706 with Toja Ellison and Tanja Gellenthien joining her close behind in the 700-club. “Today was a really nice day. It’s a nice field especially since it’s surrounded by the tree line. We did have a bit of minor tricky winds, just enough to push you into the 9s, but nothing too hard to handle. The air was a little thicker with the humidity, so your arrows move a little more. Honestly, it was about the best day you could ask for so I think we’re all happy with that,” said Pearce. “I shot well today – one of my personal bests. To me this was good, but I must follow it up tomorrow.” 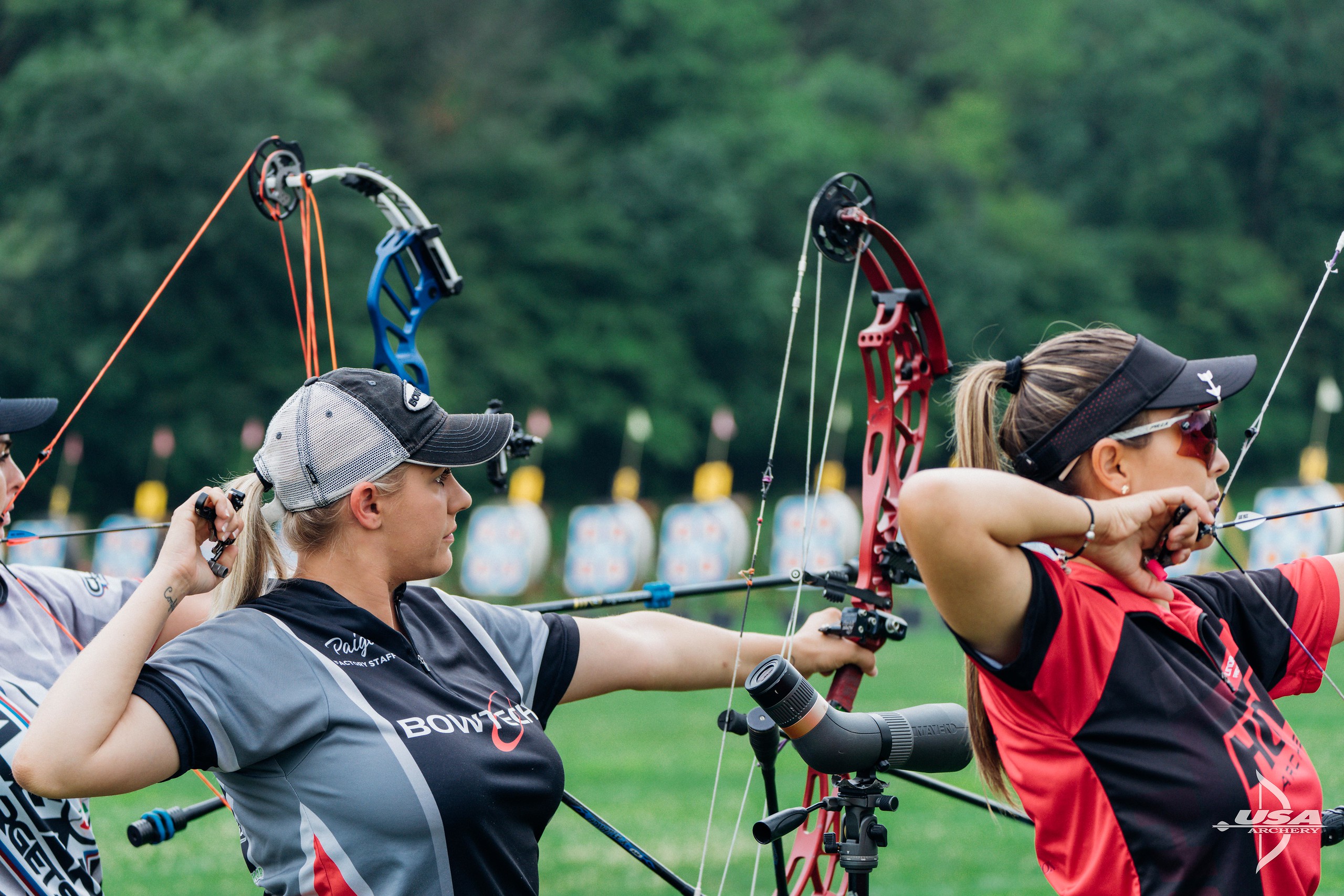 The compound men’s line featured a deep talent pool with 14 archers breaking the 700-mark. Leading the crew is James Lutz who shot a 713 followed by Sawyer Sullivan, Tate Morgan, and Jonathan Scott who all scored 710.

Shooting in the compound open men, Benjamin Thompson leads with a 686 ahead of Douglas Godfrey JR and Andre Shelby. On the women’s side, Wendy Gardner posted a 641. In the W1 open division, Jason Tabansky scored 613.

The barebow men’s division has one of its largest showings of the season with 56 archers on the line. John Demmer III, a staple in the barebow community, is on top with a 645. “I’m here with a great group of guys. Competition is pretty stiff this year; this is the biggest group I’ve seen,” added Demmer.

Fawn Girard is primed for success on the barebow women’s end of the field with a 19-point lead ahead of her competition.

Shooting a 617 on the barebow masters 50+ field, Michigan’s Steve Oakley is in the first position ahead of Spanky Brooks and Michael Holson. Sabrina Harrigan shot a 558 flanked by Tracey Francis with a 545 and Melissa McAvoy with a 539.

Headlining the recurve women is Casey Kaufhold with a commanding score of 675. She is joined by Catalina GNoriega and Molly Nugent at the top of the rankings.

Kevin Mather leads the recurve men’s open with a 608 followed closely by Eric Bennett who shot a 601. The women’s open featured a standout performance by Candice Caesar scoring 517.

On the recurve masters 50+ field, Mark Williams from Florida shot a 641 ahead of Ron Gosnell shooting a 635, and Guy Gerig with a 623. Nicole Rasor had a great day with the masters 50+ women after she shot a 641. “I shot pretty well, I have a few things to clean up for tomorrow and hopefully have a better day,” said Rasor. “With these women, it’s so much fun. It’s all about enjoying each other, supporting each other, having a good time, all while performing well.”

Janice Walth and Kelly Thornbury joined the lineup with Walth in the lead after the first day of qualifications. 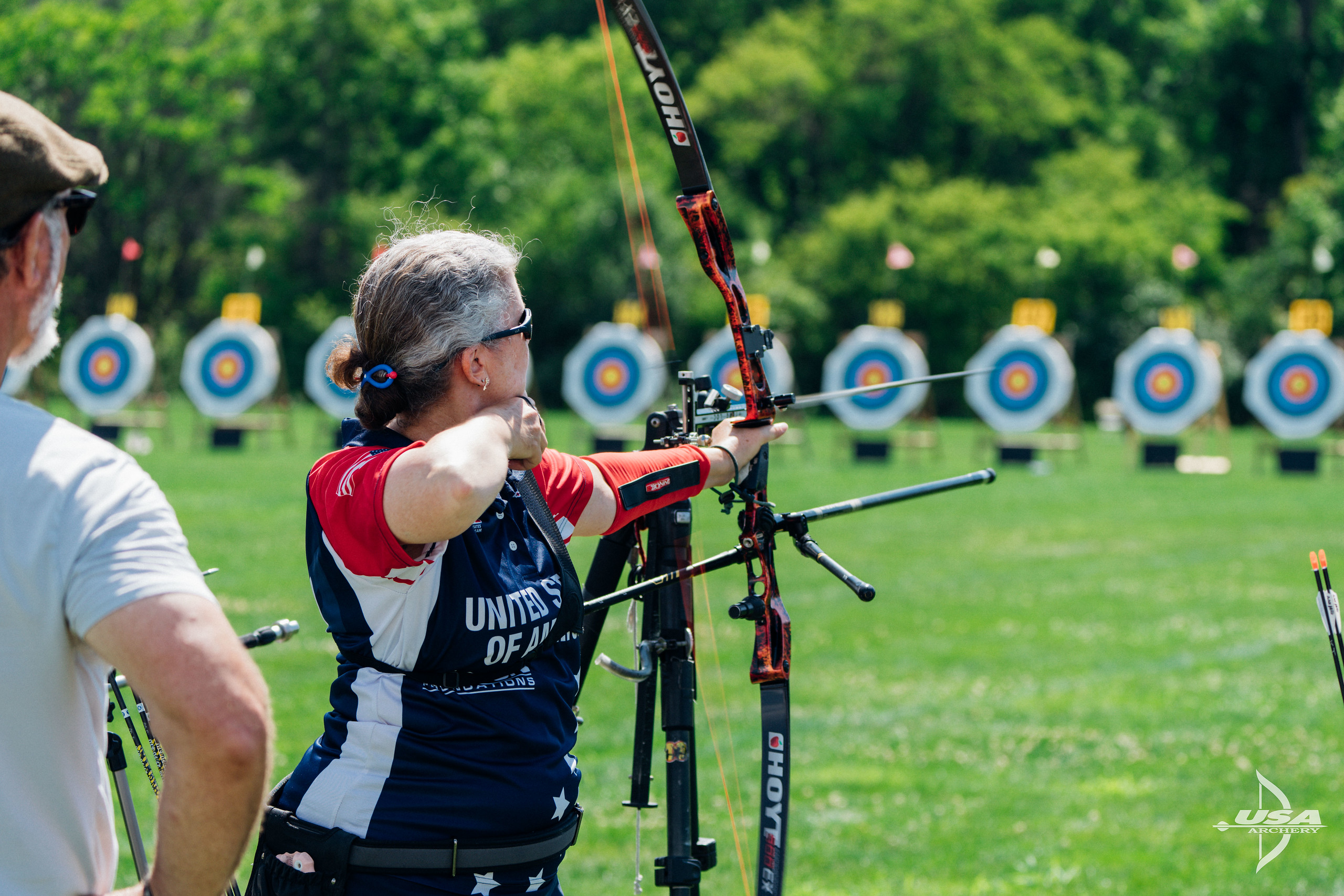 The afternoon featured a fun mixed team event filled with laughs, perfect scores, and themed uniforms. The competition resumes tomorrow with the second qualification day. Complete results are available on Between Ends and photos are on USA Archery’s SmugMug. The U.S. Open senior gold medal matches will be streamed with Competition Archery Media on Saturday.