SHANGHAI, China – A hot day in Shanghai set the stage for a glorious compound Saturday at the second stage of the World Cup for team USA Archery. With archers representing the U.S. in every gold medal final of the day, confidence and excitement radiated through the team.

The compound women opened the day with a nail biter of a finish to claim the first gold over Korea. Alexis Ruiz anchored Sophia Strachan and Jamie Van Natta in the trio’s second consecutive gold final appearance in as many stages of this year’s circuit. With a silver from Medellin under their belt, the team with two world cup rookies was ready to fire back even stronger.

Coming from behind in the third end with a perfect 60, the U.S. women came to a draw at 229-all to force a shoot off. Korea opened with a near dead center X, meaning the U.S. would most likely need to win on score. Coming down to the final arrow, Korea had scored a nine to open the door, so a 10 was all that was needed to win. It looked like a nine for the U.S. team, but the final arrow was called aa 10 and the USA clinched the gold by millimeters. 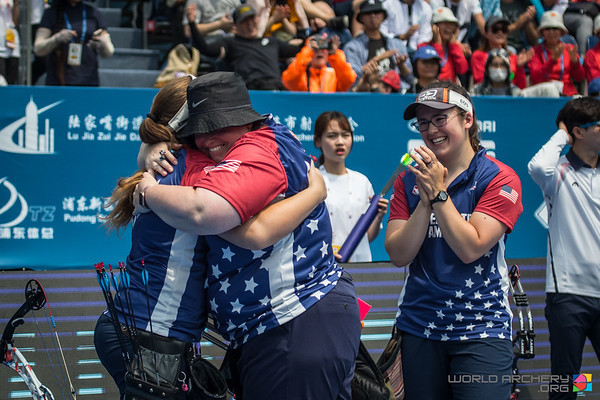 The compound men’s team then took the field, again to face Korea for gold. A repeat of the last gold medal match in Shanghai, where the U.S. men came from behind with a perfect 60 to take the win, Braden Gellenthien, Kris Schaff and Matt Sullivan were eager to defend the U.S. title.

This time, there was no coming from behind – with two commanding 59s to open the match to Korea’s 58s, the U.S. had a good lead. Never looking back, perfect scores to finish the match decided the USA’s victory 238-235.

Ruiz and Sullivan, defending their gold from Medellin two weeks ago, then took to the stage for the mixed team title against Belgium. Sullivan, who was the top seed in qualification, was perfect all day – cleaning 10s on every arrow of both the team and mixed team matches. Ruiz posted strong scores as well to secure another big win 156-150.

Ruiz quickly returned to the field to shoot for bronze, which she also won in Medellin. Shooting against Luo Sha of China, in China’s first appearance in an individual compound medal match, the reigning World Archery Youth Champion was a favorite to win. Luo shot lights out through the first few ends, turning on the pressure with a 118-117 lead headed into the final three arrows. With a perfect 30, Ruiz clinched the win 147-146 as Luo faltered in ending an impressive bronze final. Ruiz now leads the world cup rankings for the season.

For the compound women’s gold, Columbia University student-athlete Strachan, took on Korea’s decorated So Chaewon. So was near perfect, while Strachan worked to find her rhythm throughout the match. With a 140-148 finish, Strachan picked up silver in her first individual world cup stage medal match. 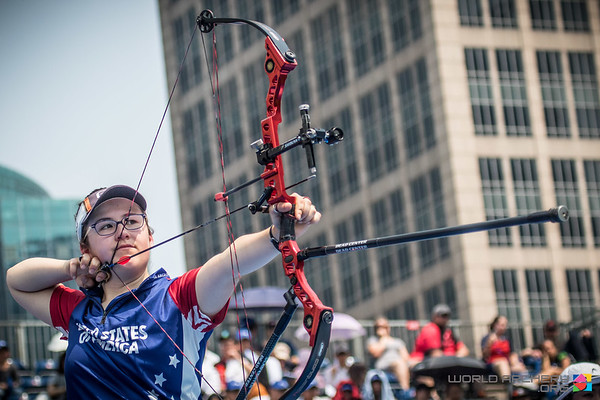 To cap an exciting day with a hotly anticipated match, Braden Gellenthien contested the compound men’s gold. After a poor equipment adjustment in Medellin cost him the gold, Gellenthien, who is feeling his best in a while came ready to win. Shooting against relative unknown Frederikx of Belgium, Gellenthein was on point, dropping only two points the whole match. Coming down to the final arrow, it looked like Frederikx had the win, only down one point, but a surprising 8 cost him the match, sealed Gellenthien’s gold and punched his ticket to the World Cup Final this fall.

Competition continues with Brady Ellison’s recurve bronze final tomorrow. The match will be live at www.olympicchannel.com/live.