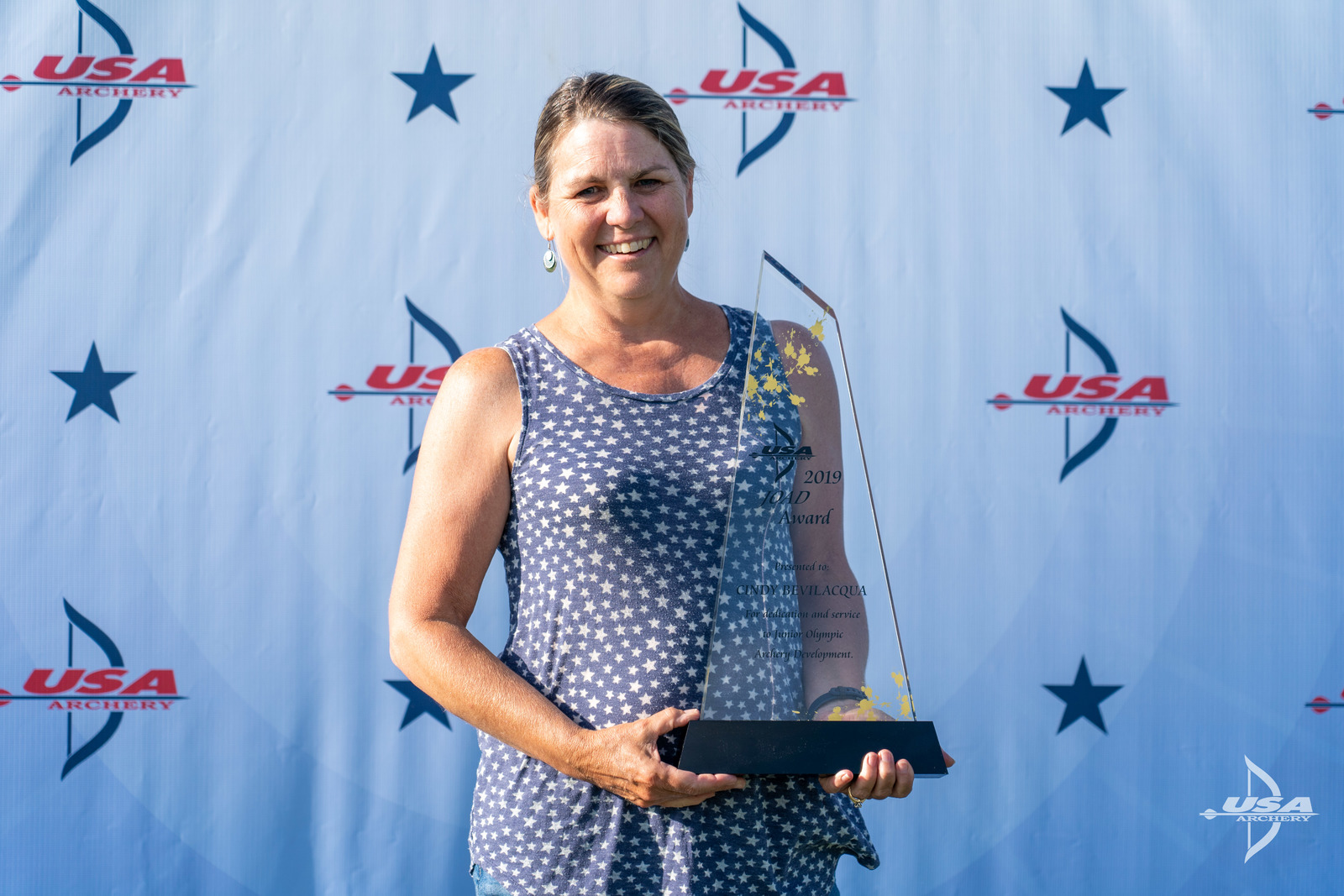 COLORADO SPRINGS, Colorado - USA Archery is proud and honored to present the George Helwig Junior Olympic Archery Development (JOAD) Award to Cindy Bevilacqua of Middletown JOAD. The Award, named for the 1960 founder of JOAD, is presented to an individual who has shown continuous support of the program throughout the years. Recipients of this lifetime achievement award have gone above and beyond in their involvement and service to the sport of archery and have made a significant impact on their local or surrounding communities.

Coach Cindy Bevilacqua has been involved in the sport of archery for over 50 years, as a decorated JOAD archer, collegiate champion, beloved international team leader, celebrated coach, accomplished teacher, passionate community advocate, and her contributions to the sport have made a deep and lasting impact on the archery world.

Level 4-NTS Coach Bevilacqua began archery with her father as a hobby that would shape the rest of her life. A two-time All American, named twice to the United States Archery Team, inducted into multiple halls of fame including James Madison University’s, Coach Bevilacqua’s most notable roles have come from her 35 years of coaching. Cindy was one of the youngest coaches ever to receive a coaching certificate from The World Archery Center, and in 1996 she was named Developmental Coach of the Year by the United States Olympic Committee.

In her home state of Pennsylvania, Coach Bevilacqua has introduced thousands of archers to the sport through her Middletown JOAD team, she has certified hundreds of archery instructors and has served as a regional representative on USA Archery’s JOAD Committee for over a decade.

Coach Bevilacqua’s archers have celebrated accomplishments on the national stage, and many have gone on to coach, start collegiate archery programs, and give back to the archery community in so many ways, inspired by their coach’s leadership and selfless dedication over a lifetime of service.

Countless letters of support accompanied Coach Bevilacqua’s nomination for this award, citing the many ways she has shaped archers into great athletes and people. She is loved and revered by athletes, parents and peers for her efforts.

One notable writer, JOAD archer Natalia Orlovsky shared: “Ms. Bevilacqua is both a remarkable coach and a passionate proponent of the sport of archery. She has helped me and my teammates to grow as archers and as people; her encouragement and expertise have proven invaluable on several fronts, from form improvement to strengthening of mental game. In addition to fostering a passion for the sport in hundreds of her JOAD students, Cindy has helped us to acquire valuable skills that are applicable both on the range and in other aspects of our lives, and I am immensely grateful to her for her work.”

“When we were looking for a new coach, I never thought we'd find a new family member,” commented Joe Bellino. “Cindy provided an instant warmth and understanding that made my son feel at home. We travel 135 miles from New York to train with her. Occasionally, Cindy will accidentally call Chris by her son's name, Kurt - which brings a smile to our faces and shows once again her affection and the close connection she has with her students.”

JOAD Coach Dawn Altomonte, a student of Cindy’s who went on to become a Resident Athlete and collegiate archer before coaching, added: “One person who cannot say they missed their calling in life is Cindy Bevilacqua. She is doing exactly what she is meant to do, coaching and helping kids achieve their goals in archery and in life.”

USA Archery is extremely grateful to Cindy Bevilacqua for countless years of dedication to growing and supporting the Junior Olympic Archery Development Program. She represents everything George Helwig envisioned in creating this Program and are thankful for the lasting impact she continues to imprint on the archery community.

Learn more about the JOAD Award.