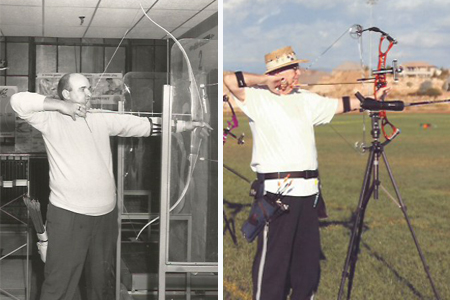 Ed Marten passed away yesterday. In addition to a prolific competitive archery history, Ed served on the NAA (now USA Archery) Board of Governors from 1972-80 and was the President of the organization from 1977-79. He was instrumental in moving the NAA headquarters from the Clayton Shenk basement to the US Olympic Training Center in Colorado Springs in 1978.

Ed worked for the USOC (now USOPC) as a Data Processing Manager and was the impetus for moving the NAA offices to the Springs, as the second NGB to join the campus. Ed was also instrumental in developing the NAA’s computer programs and scoring programs for events. He belonged to several archery clubs and always dedicated his time to growing archery at the grassroots and professional levels.

Ed competed in 58 NAA National Championship events, beginning in 1960. He also participated in Field Archery and was manager of the U.S. Team for the World Archery Field Championships in 1972. He was the archery coordinator for the 1979 National Sports Festival.

Christine McCartney, USA Archery Historian, who contributed the information shared here, commented: “The list of Ed’s archery career highlights is endless, but I will always remember his amazing support of the archery community. If you were lucky enough to have attended National Championships held in Oxford, OH at Miami U., you will remember this fine gentleman both for his comradery with his fellow competitors on the field of play and for his social functions as he entertained us with his singing and guitar playing at the dorms on the beautiful Miami U. Campus. Thanks for all the great memories Ed Marten.”

USA Archery thanks Christine McCartney for her beautiful memories of Ed and the NFAA for the photos. Ed Marten made a tremendous, lasting impact on USA Archery and our thoughts and hearts are with his family.