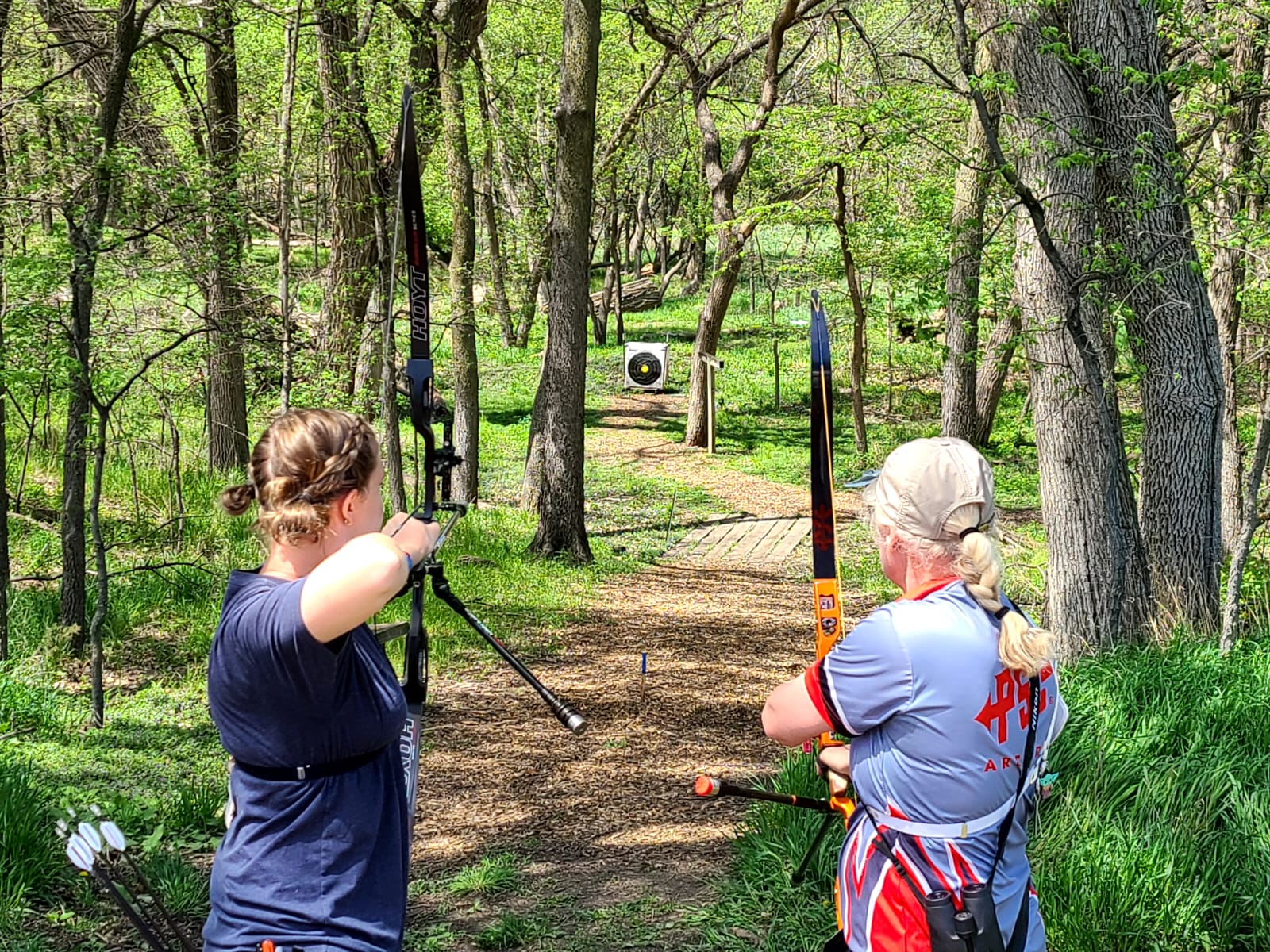 YANKTON, S.D. – The 2022 USA Archery Field Nationals wrapped today in Yankton, awarding national titles among stiff competition. This weekend’s events also feature the U.S. Team Trials for the 2022 World Archery Field Championships, which will be held at the same location later this fall, and the recurve and barebow team trials for the 2022 World Games, also hosted stateside in Birmingham, Ala. this July.

Reigning recurve women’s national champion Molly Nugent, who just began field archery last year, took the win again this year despite recent recovery from major foot surgery. “I’ve been practicing at least once a week with my dad,” commented Nugent, “going out and hanging FITA field targets to learn unmarked and I just felt really good about it the last couple months. Last year I learned a lot about what you have to do with the hiking, measuring, and it paid off.”

World Champion Brady Ellison pulled out another national title for the recurve men, topping the field with a 762, ahead of Matthew Nofel’s 705 and Jackson Mirich’s 704. This was Nofel’s first field event and a strong showing to make the podium among a tough field of competition.

The compound men’s field was also stacked with multiple world champions and tough field competitors. Jesse Broadwater, who won his first world field title in 2012, was excited to return to this style of competition after several years away: “Yesterday was awesome; we had a good course as far as angles go and today’s was stretched out pretty good and had a little bit of wind in there. I’m just happy to shoot this style of field archery again; it’s my favorite style and hopefully I’ll do well in the Trials and make the world team. I’d love to represent the USA at the world championships again.”

Broadwater added for those who have not yet shot a World Archery field event: “People shouldn’t be intimidated by FITA field, everyone’s more than willing to help you out, get a ranging system down, learn the angles, the cuts; I really think it’s the most pure form of archery and if you haven’t done it before you’re really missing out. Come try it out!”

World Field Champion Dave Cousins finished the day just two points behind Broadwater’s 835 with an 833 and Dan Jasa took bronze with an 818. Also a World Field Champion, Paige Pearce claimed another national title for the compound women, finishing with 826 ahead of Toja Ellison’s 816 and Heather Gore-Smith’s 779.

The barebow field was deep with talent and Day 1 leader Robby Weissinger held onto his lead to finish first with a 626. Ryan Davis took silver with 620 and reigning target national champion Matt Yacca finished with 617 for bronze. Christina Lyons topped the barebow women’s podium with a 599 while world field silver medalist Fawn Girard was second with  587 and Caelyn Briley claimed bronze with 486.

In the youth events, the U21 barebow and compound women’s divisions were the largest and most contentious. It was Lille Aguilar, shooting up in age class, who claimed the compound U21 women’s title in her first field nationals with a strong 767 ahead of Rendyn Brooks’ and Gracelyn Chambers’ 754s. Maggie Brensinger and Laura Hughes battled it out for the U21 barebow women’s title, but Brensinger came away with the win 551 over 540 with Olivia Artz taking bronze at 459.

Brensinger commented: “We shot the mountain course today and it was brutal; I came out on top after today, which I’m surprised at because Laura had me sweating. At my home range I sometimes shoot on flat ground, but we don’t have anything like what we faced here today. This is so much fun, it can be frustrating, but it’s fun.”

Notably, Hunter Longest and Ryan Booth both finished with 750 in a tight race for the compound U21 men’s title, with Longest taking the win on 6s. Mark Hodges and Tracey Francis were standouts in the barebow 50+ divisions, taking gold with significant margins.

The Trials events continue this afternoon and will culminate with team nominations tomorrow. View complete results from the competition.