It’s been since 1988 that the USA women’s archery team has medaled at the Olympics, and since 1976 that we’ve had an individual women’s podium finish. With the strongest squad we’ve put together in over three decades, that could all change in Tokyo.

Mackenzie Brown, who qualified 19th in Rio, scored a personal best 668 in today’s ranking round to seed 5th individually and lead the team to a 3rd place qualification. “I’m super stoked. I’ve worked really hard for this moment and it feels like the last two years are coming together right at the right time,” commented Brown. “I think that just the way I shot today was the way I’ve always known I was capable of. I trusted myself. I had one end I’d like to get back but otherwise I have no regrets for today and did really good, paid just enough attention and did my job.”

Brown is competing alongside young talents in their Olympic debut; Casey Kaufhold qualified 17th individually with a 653 and Jennifer Mucino-Fernandez was 24th with a 649. Mucino-Fernandez said she worked to keep a lot of the focus on shooting like any other day, rather than letting the pressure of the Olympic stage get to her but, “One really funny thing is that when we finished the first end, Casey goes ‘Now you’re an Olympian, now that you’ve shot at least one arrow!’ we all high-fived and had a little celebration,” she shared.

The youngest member of the team, 17-year-old Kaufhold, who opened with a 10 on her first arrow, and a strong 58 for the first end, was thrilled with her impressive Olympic debut – the highest rookie Olympic placement in a long time. She commented: “I’m super happy to have contributed to the team doing so well, I think third is the highest a U.S. women’s team has placed in a long time. All three of us did well. There were some tricky winds, but I finished strong and overall it was good for my first qualification in the Olympics ever. I’ve been working hard for this for a long time, so it’s cool to finally see it happen.”

On the team’s outlook, Kaufhold added: “there are only 12 teams, so placing top four puts us through to the quarterfinals already and I think we have a great chance of being in the gold medal match.” 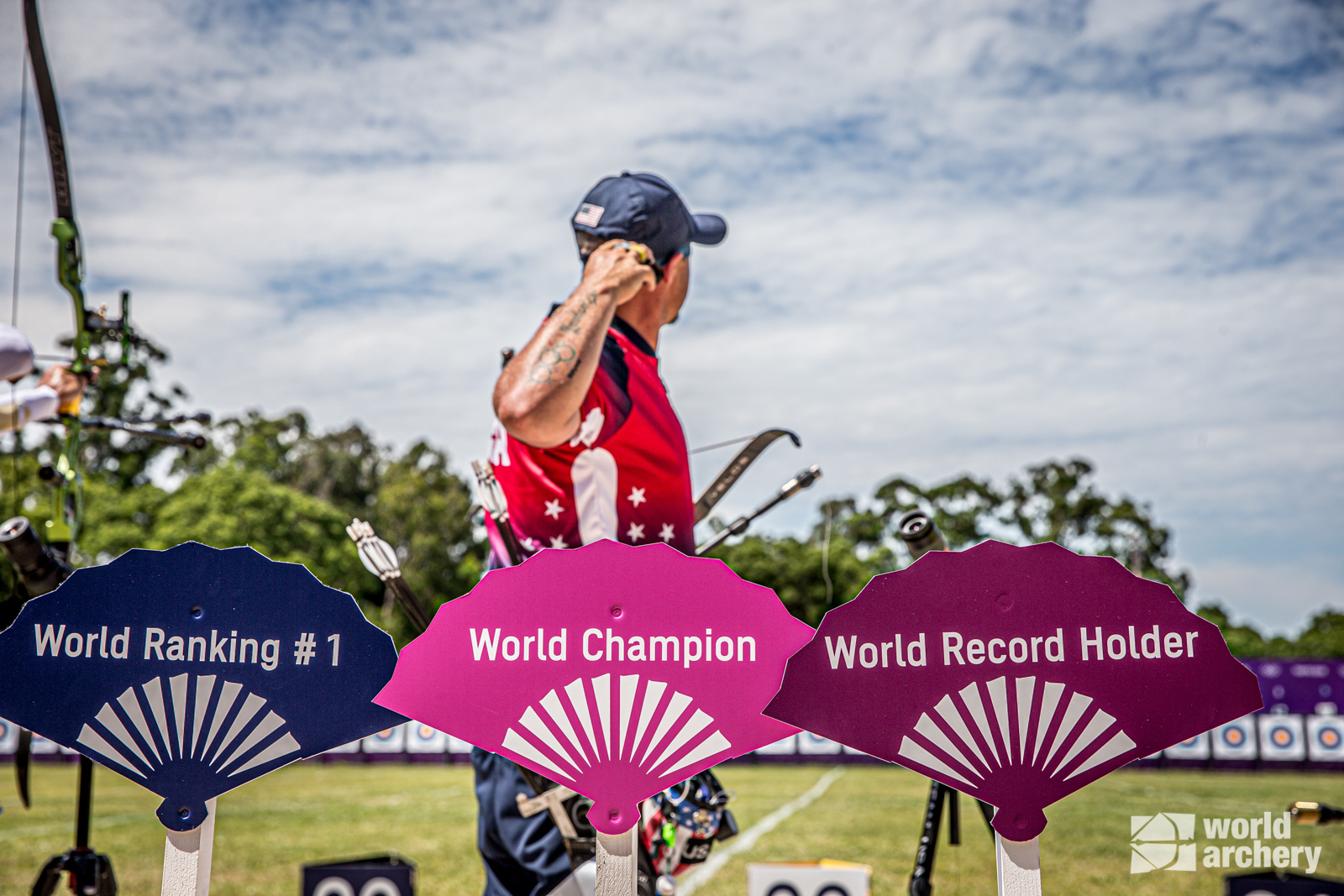 The recurve men’s team started out in the direct line of fire of a brutally tricky wind. It was rough, and their scores showed it. All three battled hard to come back and finish strong, with four-time Olympian, World Champion, World No. 1, World Record Holder Brady Ellison at the lead. Ellison, who’s accomplishments were boasted on special placards on the field of play, finished 2nd with a 682.

“The first half, I completely missed the wind on too many shots, I think I shot an 8 on every end,” commented Ellison. “The second half the wind got a little bit easier and I got a little smarter and I was able to come back up. Technically, I’m really happy with how I shot all day today, I shot really strong and all of that was good, I just misread the wind a bit. I knew I needed to shoot way better the second half, not only for myself, but to get the team in a better place than where we were at.”

Jack Williams, in his Olympic debut, finished 29th with a 656 and Jacob Wukie, making his second Olympic appearance since London 2012, was 47th with a 649, putting the team 5th. The U.S. men’s team has won silver at the last two Games and is hungry in the hunt for gold.

“It was good, to go up there and be able to compete again is awesome,” commented Wukie, who was on the medal winning team in London with Ellison. “I was disappointed with the first half especially; it was challenging but I was able to improve and overall I was pretty content with the shots I was making. The wind was hard to figure out— it wasn’t hard to execute shots, but guessing the wind was very challenging. We were right in the middle, and most of the higher scores came from archers on the ends of the field.” 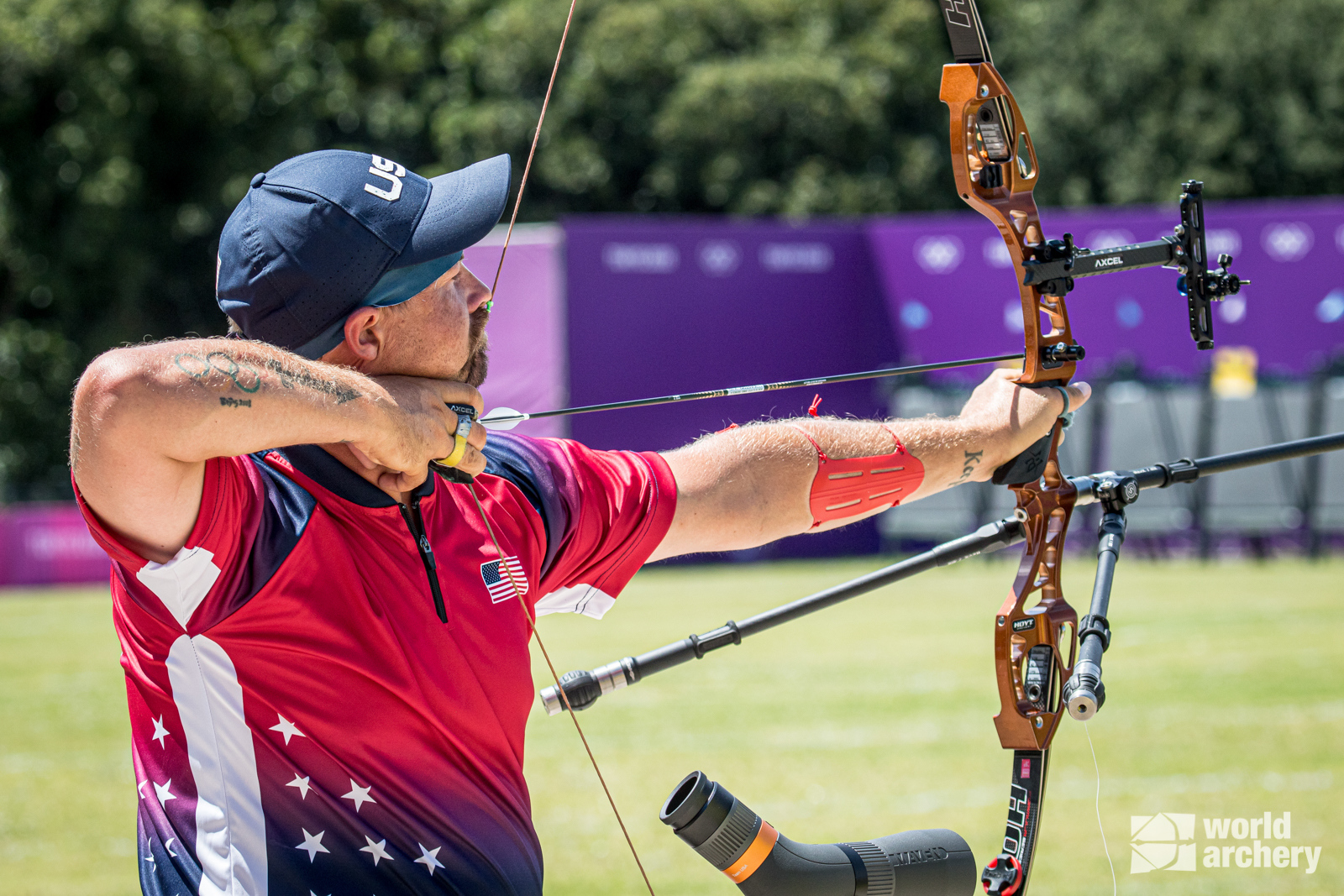 The mixed team event makes its inaugural appearance on the Olympic program here in Tokyo. The one-man, one-woman duo event is one the U.S. has historically performed well in on the world stage. Ellison and Brown will be the first to represent Team USA at the Games and they’re off to a great start, qualifying 2nd behind Korea.

“I’ve waited five years for this and I’m honestly beyond thrilled,” shared Brown. “Brady and I have shot many mixed teams together in competition and in practice, I just have a lot of confidence in us, not only because we’re good competitors and good teammates, but we’re also friends, which makes being successful that much easier because we trust each other and enjoy each other’s company.”

Ellison is confident overall: “I think we’re going to bring home a big pile of medals. The women will medal, our mixed team will win a medal tomorrow and I think that our men’s team is finally going to get the gold and then I think we have a real possibility of bringing home two or three individual medals. And that’s just what it’s going to be.”

Competition continues tomorrow with the mixed team event through the medal matches. Follow Team USA via live scores, and tune in for video streaming and broadcast. Photos courtesy of World Archery.