NEWBERRY, Florida – The 2019 Gator Cup was the second stop on the annual United States Archery Team (USAT) Qualifier Series. The event saw record breaking participation with nearly 550 archers and through most of the event, there was record breaking weather to match. There were certainly a few points of Florida storms and strong winds, as is natural for Florida in May; but tight qualification scores turned into close matches and new Gator Cup champions emerged.

In the senior recurve men’s division, Resident Athlete Matthew Nofel rose to the top, in the finals with the World Archery Championships team: Brady Ellison, Jack Williams and Tom Stanwood. Nofel and Ellison met in the semifinals, where the two drew 5-5 and went to a shoot off. Both shot 10s and went for a second arrow, where Nofel’s edged out Ellison’s by millimeters. Into the gold final against Stanwood, Nofel took a strong 6-0 victory to claim the win.

“This means all my hard work is paying off and I’m going in the right direction,” commented Nofel. “This feels really good and I can relax a little bit.” Headed into Olympic Trials later this summer, Nofel added: “The more confidence, the better. This is definitely a boost.”

World Archery Youth Championship Trials are also on the horizon, taking place alongside the next USAT event: SoCal Showdown. Holland Lintermann will aim for a spot on that team, and just picked up her first big USAT win in the junior recurve women’s division. Lintermann commented: “It was a tough field but it was super exciting to be shooting out there. This win is exciting, encouraging and motivational. This is a good confidence builder going into the trials. I’ve been working on staying focused on my process and not worrying about where the arrows are going.” 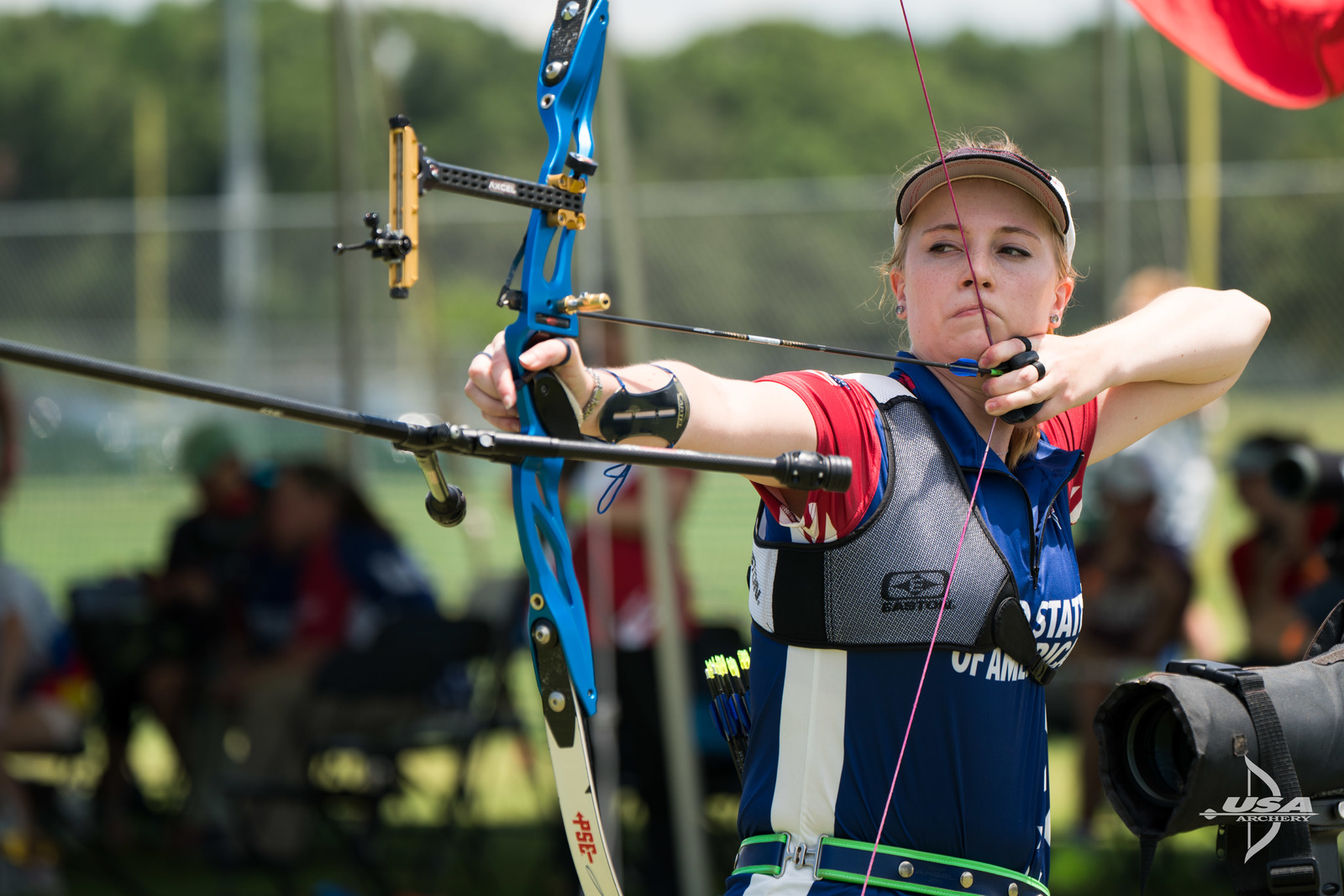 Steve Anderson clinched the compound senior men’s gold over Reo Wilde in a shoot off after quite an interesting day on the compound side. Following several surprise upsets, the overall feeling of the archers on that field was that many arrows that were close, were just out, and the weather this afternoon was an obstacle. Anderson credited luck for some of his wins today but was pleased to finish with the win. Matt Sullivan won bronze over 12thseed Caleb Sorrells. 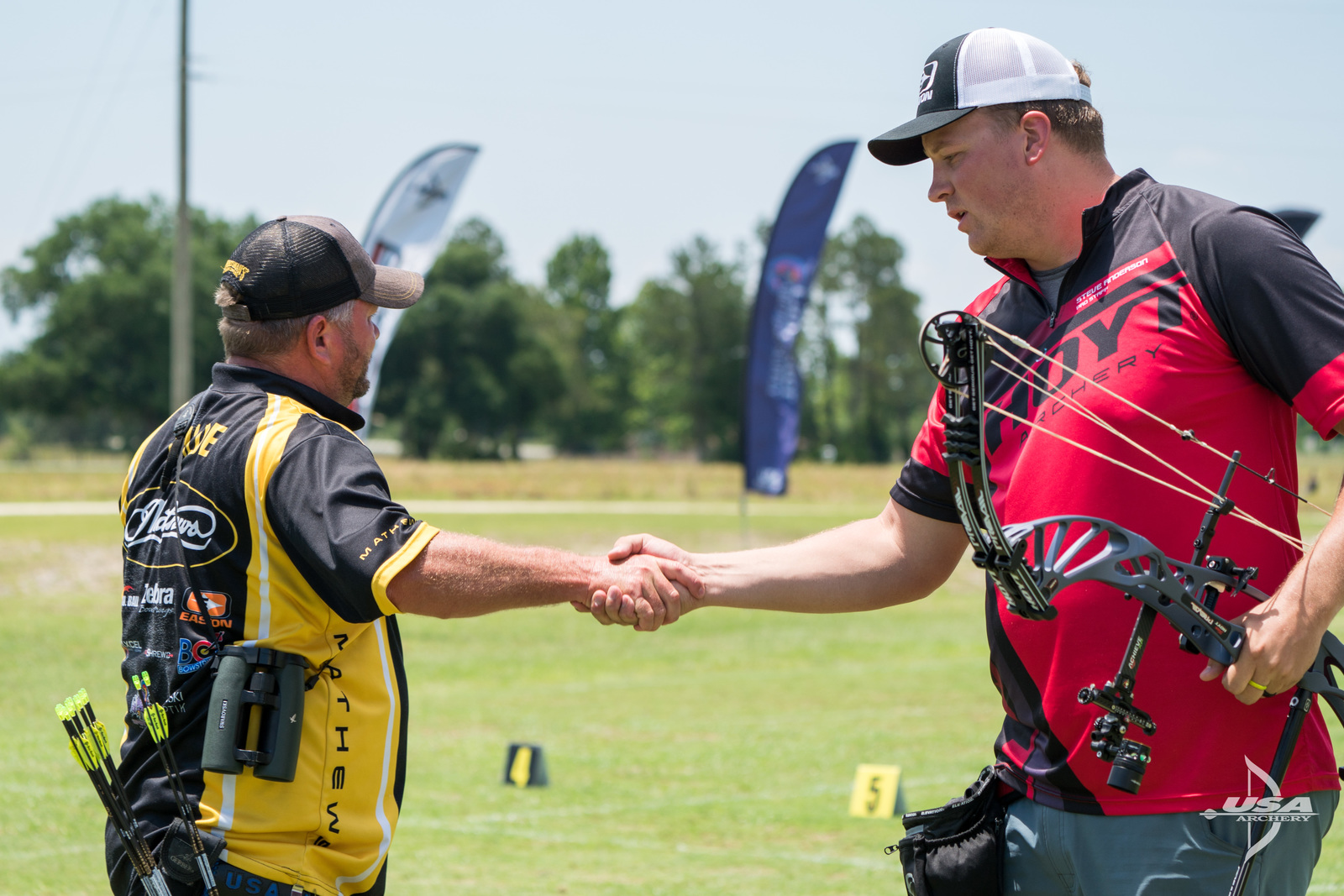 Tim Gillingham was the top compound master men’s qualifier yesterday, despite a missed arrow: “I shot pretty well, other than when I shot in the dirt yesterday,” he shared. “That made me kind of tense today, but I shot good scores, and I knew that last match against Scott [Starnes] would be a good one and it was. At one point we were within a point of each other, and I missed my last arrow, but he did too. I never thought I’d move into the masters category this quickly, but it’s the best thing for me to do in my career right now and for my family from a money standpoint, and there’s good competition there too.”

Toja Ellison, who qualified with a personal best 709 for a new Slovenian national record, was unwavering in today’s matches. She breezed through to finish with the gold over Savannah Vanderweir, and Paige Pearce finished with bronze. USA Archery congratulates the many successes of all archers who competed – from Dylan Oblander’s incredibly hard fought recurve cadet win, to mother and son, Sue and Liam Bock’s matching bronze finishes, to Sydney Sullenberger’s top qualification after back to back knee surgeries, and the countless other great stories that were shared at this event. USA Archery is grateful to all who attended and is excited to continue the season at the SoCal Showdown next month.

Complete results from the event are available here. Official event photos are posted to USA Archery's photo site, and be sure to follow USA Archery on Facebook, Twitter, and Instagram for more from the event.