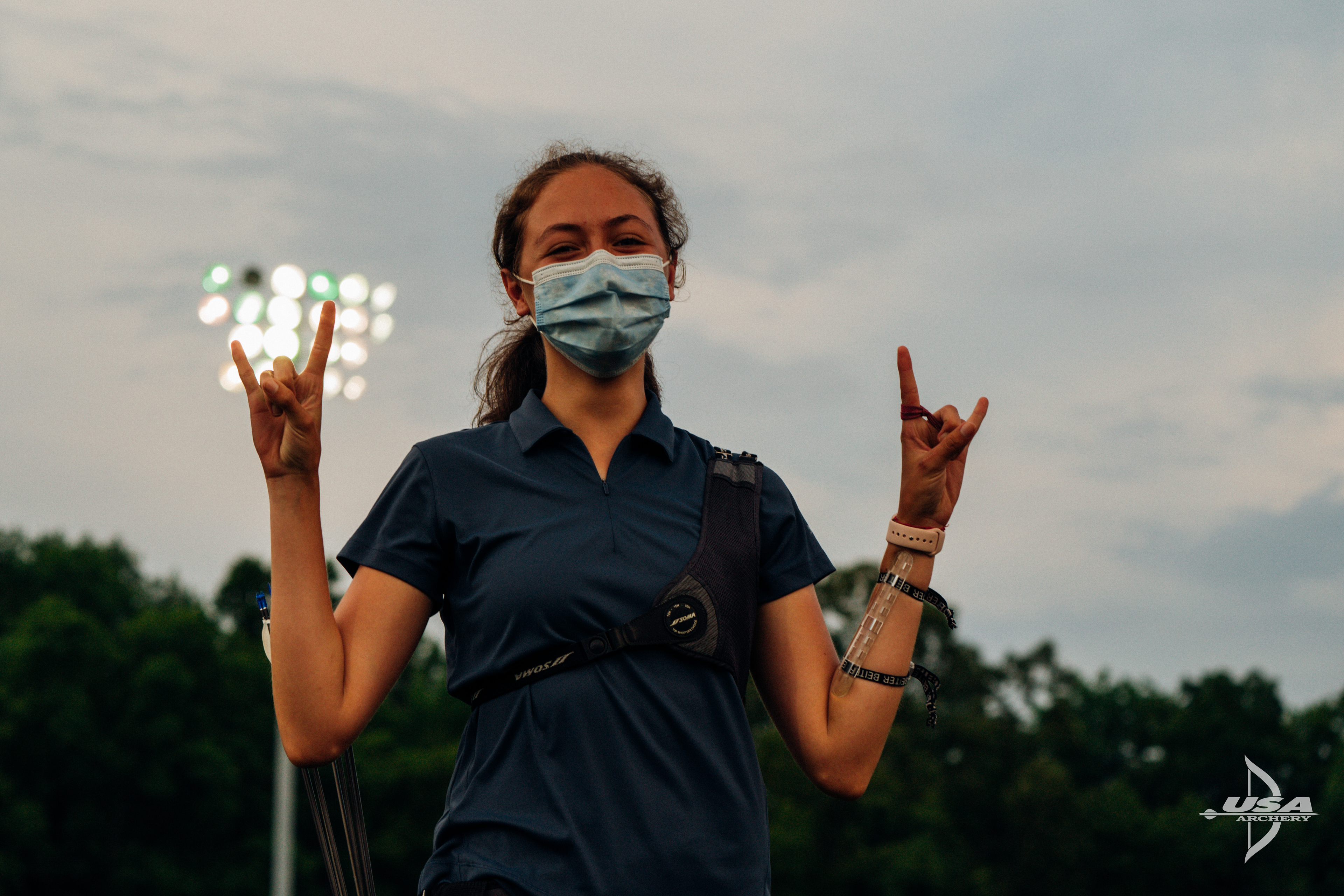 COLORADO SPRINGS, Colorado – By the time Jennifer Mucino-Fernandez turned 7 years old, she’d been telling her parents that she wanted to be an Olympian for months. They finally asked her what that meant to her, and when she explained she wanted to be the best in the world at a sport, they took her seriously. Now, at 18 years old, that dream is becoming a reality as Jennifer will represent Team USA in archery at the Tokyo 2020 Olympic Games.

Jennifer was born in Boston, Massachusetts. Her mother, Rosa Mucino, was living there while pregnant and taking care of her husband’s uncle who was in poor health, before moving to Mexico City, Mexico, where Mucino was raised and spent most of her childhood.

In support of their young daughter’s Olympic dreams, Mucino’s parents started searching and taking her to places where she could see sports. She tried gymnastics, swimming and diving, but nothing stuck. “I was in limbo and I didn’t know what to do,” shared Mucino. “Then, my dad got me a magazine about the Pan American Games of 2011 [which were held in Guadelajara] and it had all the sports. I started watching everything and I saw archery and I wanted to do it. They didn’t know what it was, they had no idea. So, my mom searched for days until she found a place about an hour away from my house.”

Mucino began shooting at the small school, but said it was more of a place to go to try archery as a hobby, not a place to train more seriously. When they saw her potential, they put her in contact with a trainer, who she and her mother then saw once a week for about six months.

“When I was in 5th grade, I took that year off of traditional school,” shared Mucino. “In that year, I trained with that coach every morning. This coach started training me as an athlete, and my mom as a coach. She had really, really bad health problems, so she was struggling to keep training me, so eventually she said you are ready as an archer and my mom was ready as a trainer. We obviously were not the best, but we had the basics.” 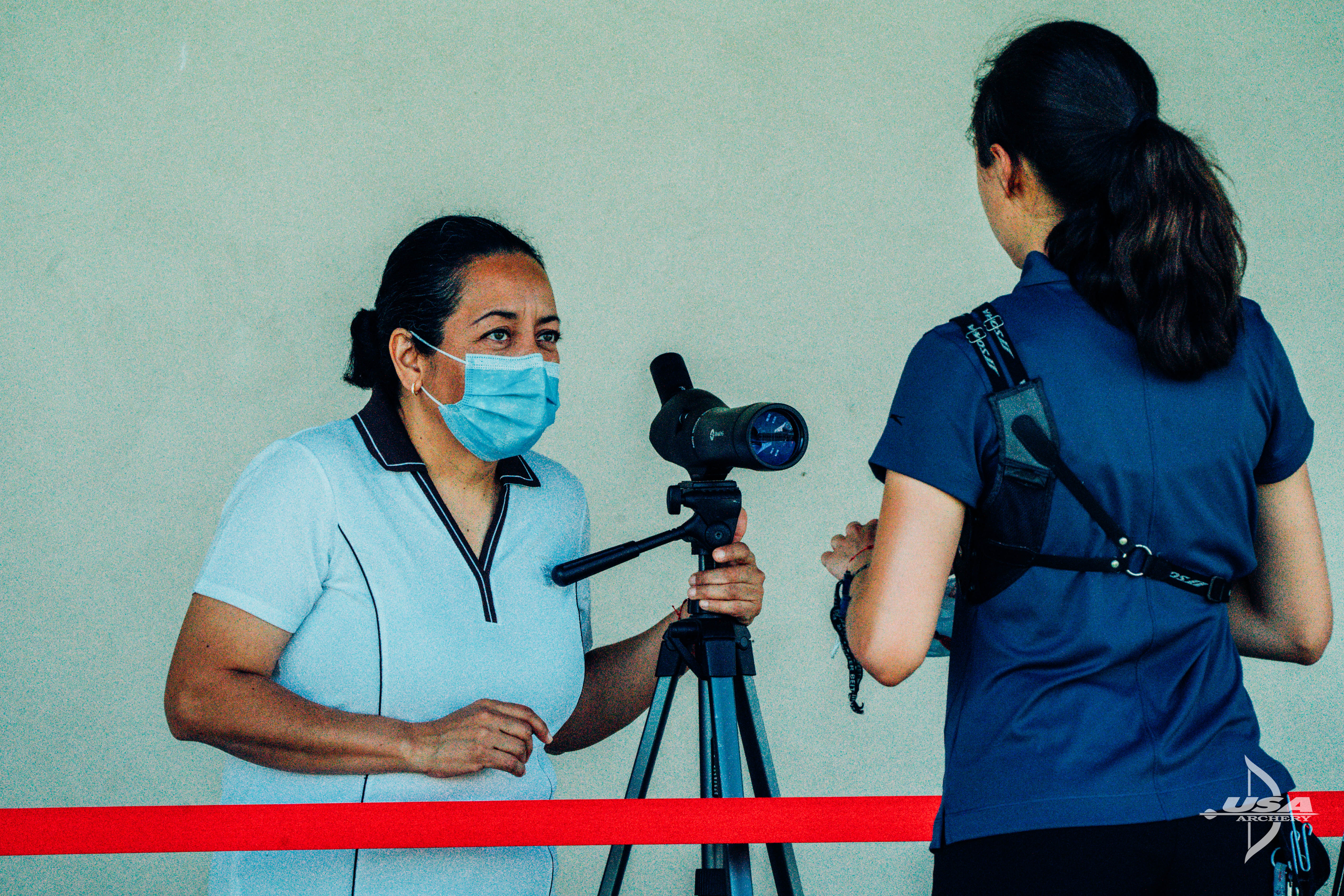 There was no archery range where Jennifer could practice, but her mother found a dirt field where she could shoot. “After a lot of fighting with the government, we achieved the right to have an archery field in a park and it has my name,” Mucino shared, proud of the range that her mother had named for her.

“I trained there with my mother for three years, and then the high-performance center in Mexico invited me to come do a trial to see if they’d want me there. I went for an assessment and ended up training there for three years from when I was 13 to 15 years old. I lived there, trained there and studied there. I was only allowed to leave on the weekends, and it was really, really tough.”

Eventually, Mucino was worn out and decided to leave the program. “I didn’t want anything to do with archery, I just wanted to rest,” she commented. “So, I took one month off and I didn’t touch my bow at all.” But then Rosa told her the 2015 Pan American Games were approaching, and Jennifer decided to try out for the U.S. team. She came to the first qualifier event, and after a month of not training, she shared: “I shot really bad. I missed the cut by one spot. I wasn’t really expecting to qualify, but some time after that, I received an email saying that one of the archers in the Trials dropped out and I could come back in. so I went to those Trials, and I didn’t do well, but I went.” 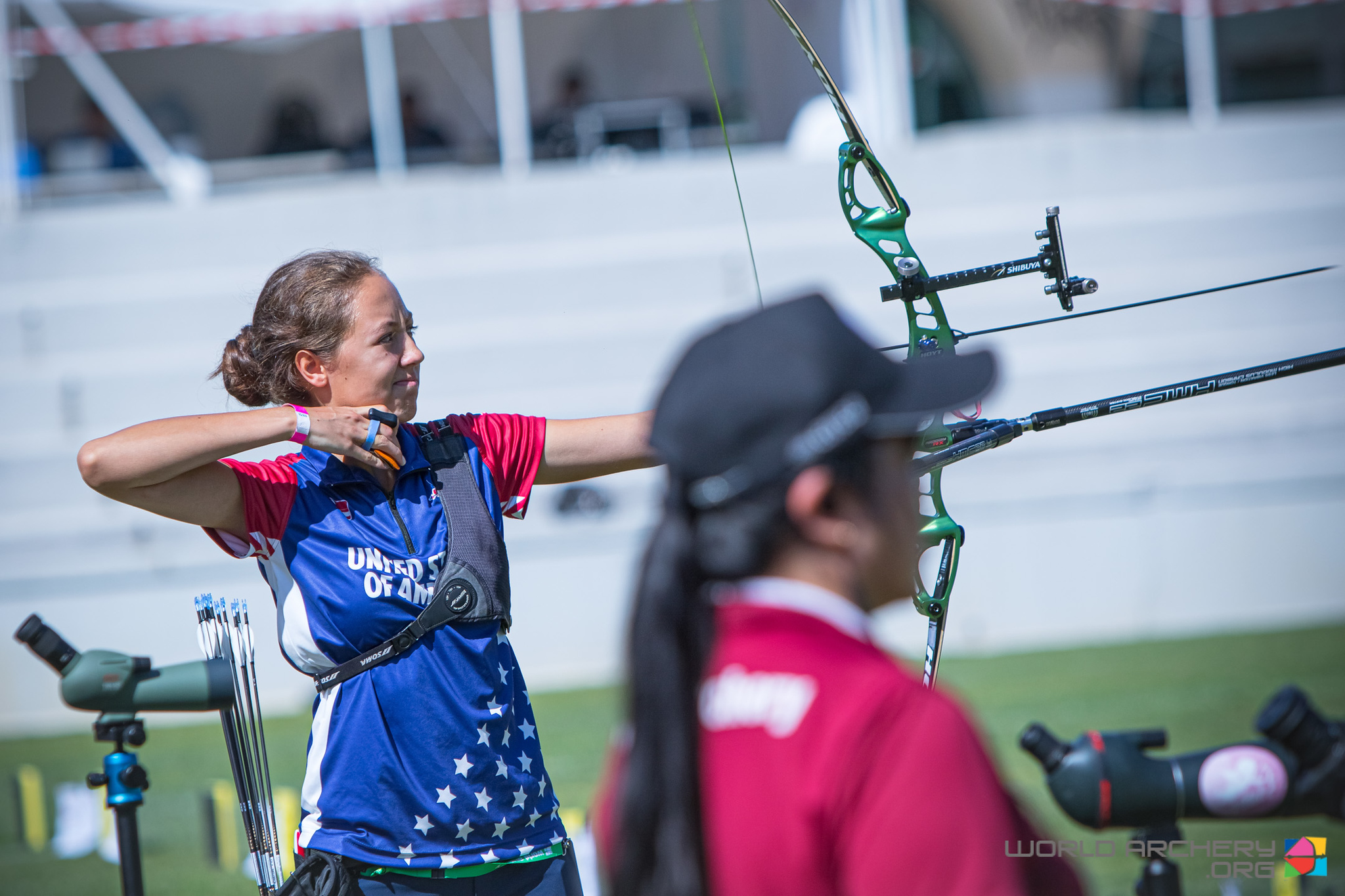 After that, Mucino’s fire was re-lit and she returned to training at home. Her next competition in the U.S. was the Team Trials for the 2019 World Archery Youth Championships in Madrid, Spain. Jennifer was named to the team and had a top 10 finish at her first major international event.

Mucino had waffled between competing for the U.S. and Mexico, trying out for both teams, but ultimately, she found acceptance from her U.S. teammates. “In Spain, I didn’t speak English. I knew the basics, but I really didn’t speak any English,” Mucino shared that she had only learned elementary English in school, but was largely self-taught from watching movies and listening to music. “I could understand most of what people said, but I couldn’t speak. And I didn’t know anyone. It was pretty tough for me. But I’m really grateful with all of the team because most of them did try very hard to make me feel part of the team and incorporate me in games and stuff.” 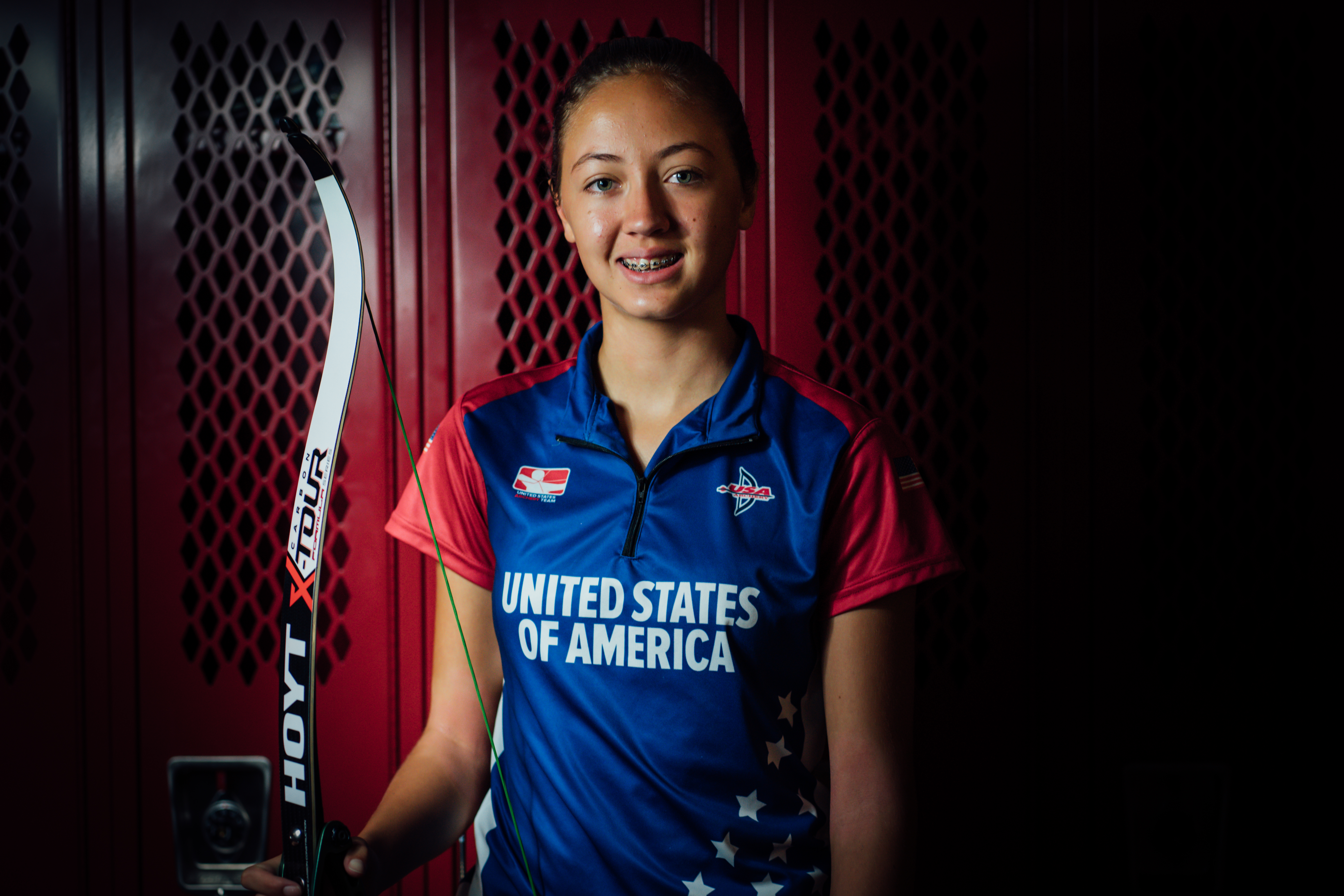 That summer, Mucino also began the 2020 U.S. Olympic Trials for Archery, and she made the cut to the top 16. “Then COVID happened,” she shared. “When COVID started, all the news and all this kind of stuff, I was at the training center in Chula Vista. I was supposed to be there for three weeks, but I had only been there for one week. I went home two weeks early, because I was worried that if I didn’t fly home then, I’d be stuck in California. But when I got home, all the fields were closed, so I didn’t shoot for a really long time.”

Mucino’s parents and younger sister decided to rally behind Jennifer’s dreams and move relocate to Boston, where they still had extended family, so Jennifer would be able to continue training. “I felt really insecure about what would happen with the Games and the Trials, but in Mexico, it was chaos, so if there was a time to go, it was then, so we moved as soon as we could. But even in Massachusetts, there were no fields to practice,” shared Mucino. She bought a target from a summer camp that was shut down due to the pandemic, and began training at 3 meters from her balcony.

“I don’t really like to blank bale,” she admitted, “so I didn’t shoot as much. Towards the winter, Mucino shared that it became really tough to keep shooting. “I didn’t know what I wanted to do with my life. Then Crystal [Gauvin] dropped out of the Trials, so I thought, if there’s a moment to stop shooting, it’s now. But then I thought, if I’ve been shooting for 9 years, and made all the sacrifices I’ve made, like I didn’t go to a normal school and didn’t have a normal teenage life… there was a lot of uncertainty, but I’d sacrificed a lot so I kept shooting.”

On where her inspiration to continue came from, Mucino added: “My parents have always been there for me and have taught me that if I want to do something, just do it. If you start something, you need to end it. They work really hard.” 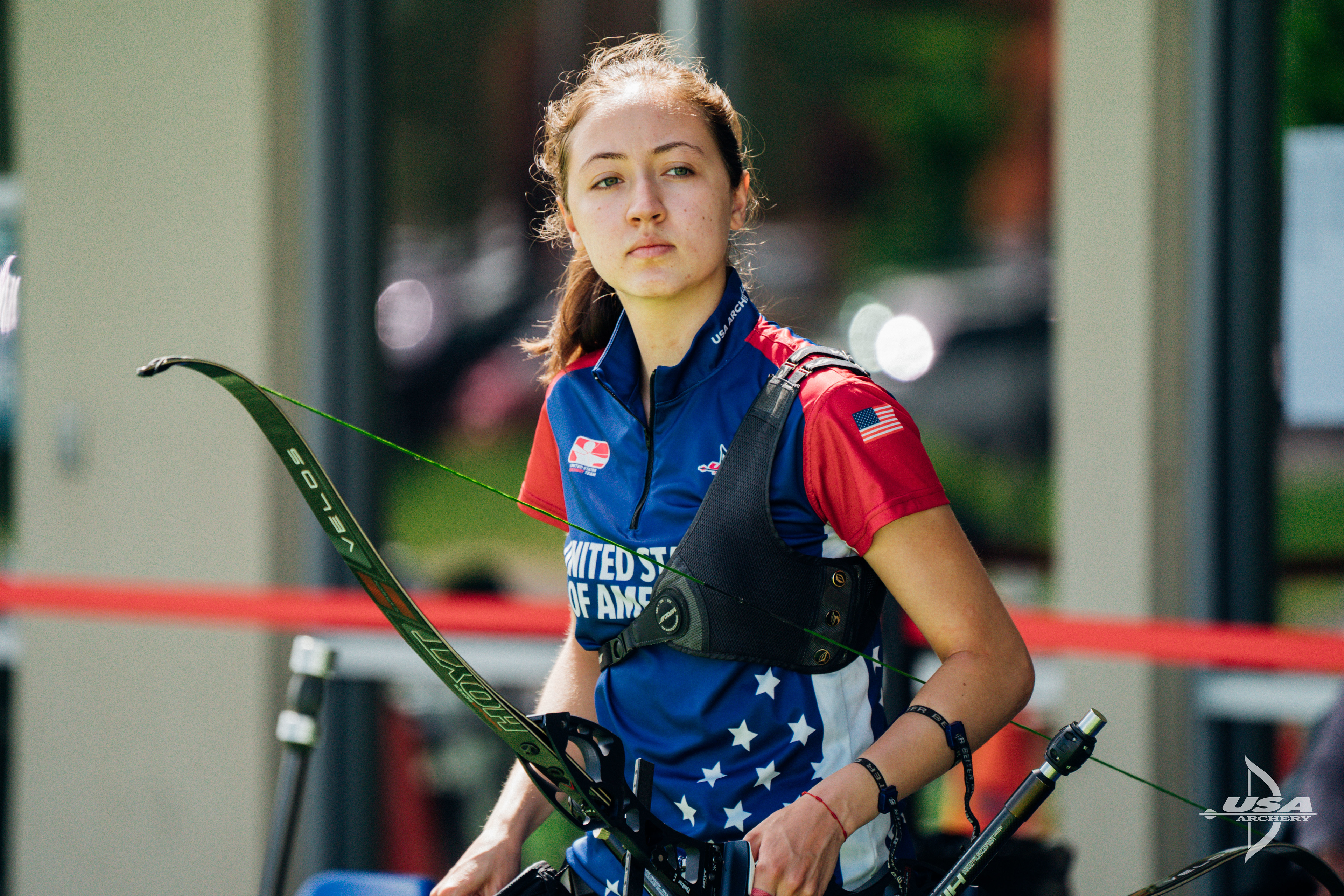 While most other archers in the Trials were able to continue training at state-of-the-art facilities, or well-equipped home ranges, Mucino had only a few weeks to train at 70 meters, versus the three meter training that was all she could do at home. “Right before Trials, I found a field at a school and they let me shoot there for two weeks. And two weeks before the Arizona Cup, I was able to train in Chula Vista.”

Her perseverance paid off, and combined with raw talent, Mucino won bronze at the Gator Cup, and then weeks later, when Trials resumed, she climbed her way up the rankings. When she finished third in the Trials, her family, who had traveled to support her, were overjoyed: “My parents were crying. All the hard work had paid off,” Mucino shared. 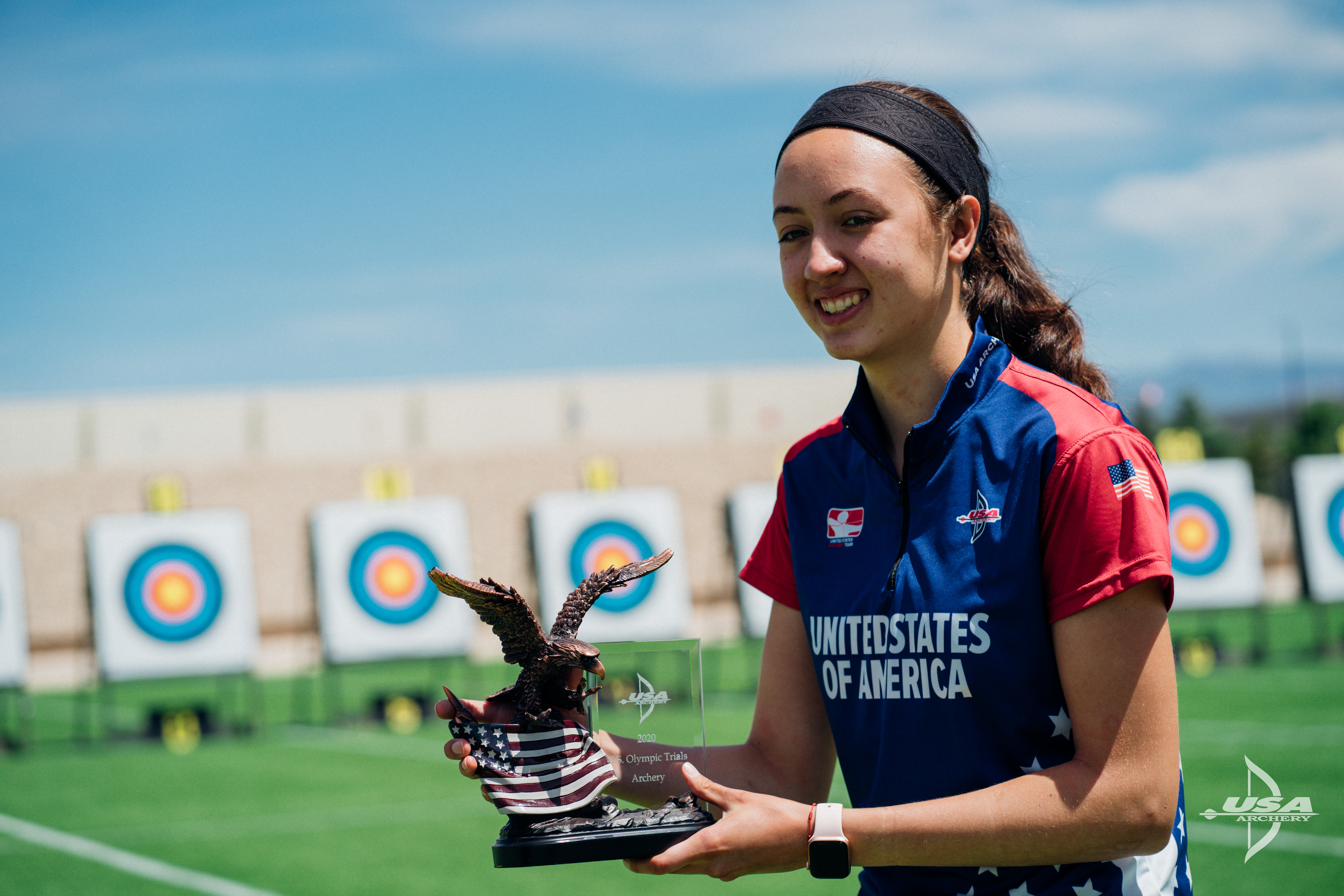 At that time, the U.S. had only qualified one women’s spot for the 2020 Olympics, so Mucino joined teammates Casey Kaufhold and Mackenzie Brown, and team alternate Catalina GNoriega in Paris for an extensive training camp before the Final World Qualification Tournament.

The strong trio built a bond impressively fast and found their rhythm as a team. Rio 2016 Olympian Brown, who has been on the world stage for the U.S. for over a decade, shared that this is the most confident she’s felt about a team in a long time. Brown and Kaufhold shared that Jennifer had them laughing constantly and brought a new light to the team dynamic. 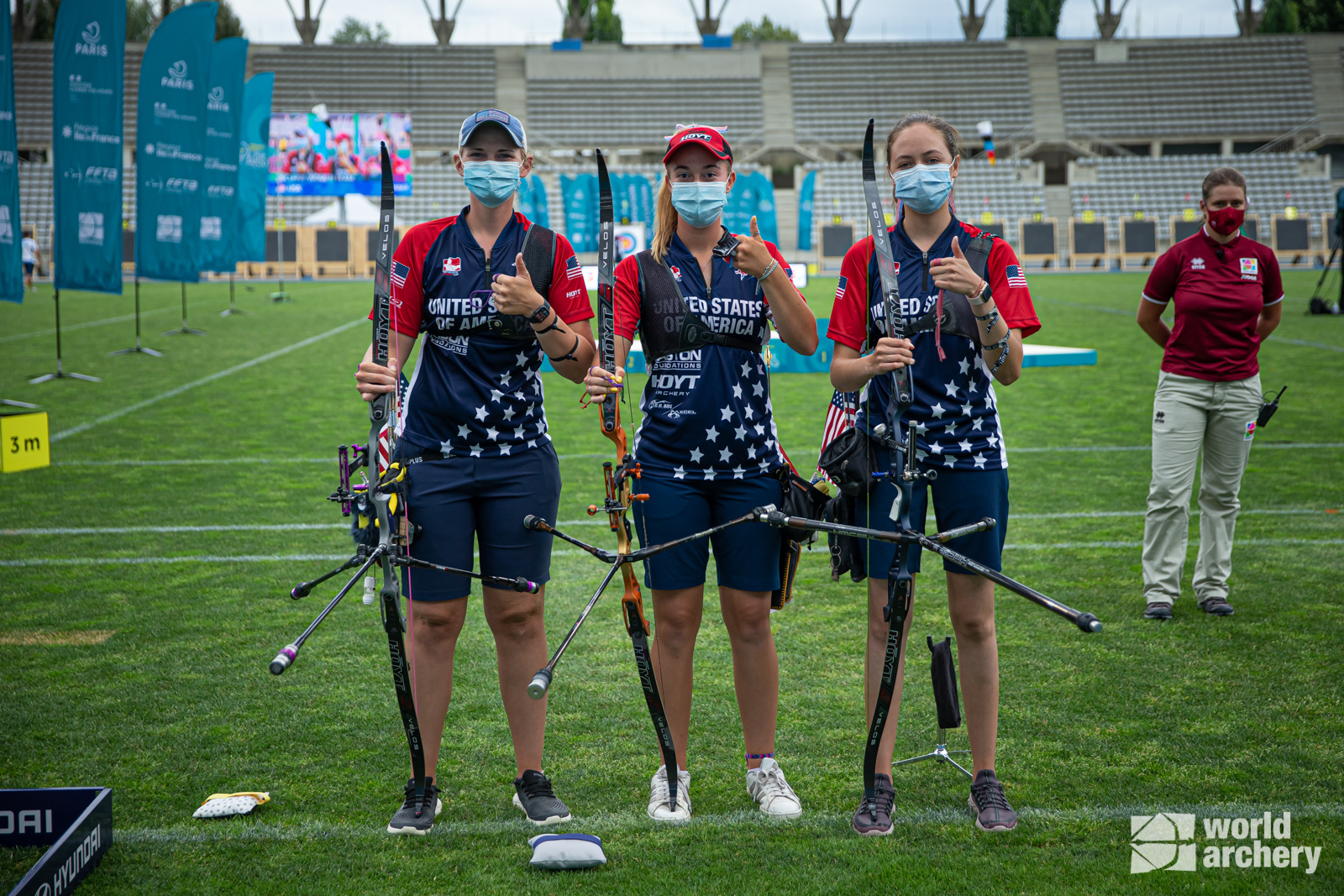 The U.S. archery team will compete in Tokyo between July 23-31. After the Games, Mucino plans to return to the U.S. to train and will have her eyes set on the 2024 Olympic Games and as many international events as she can qualify for in between.