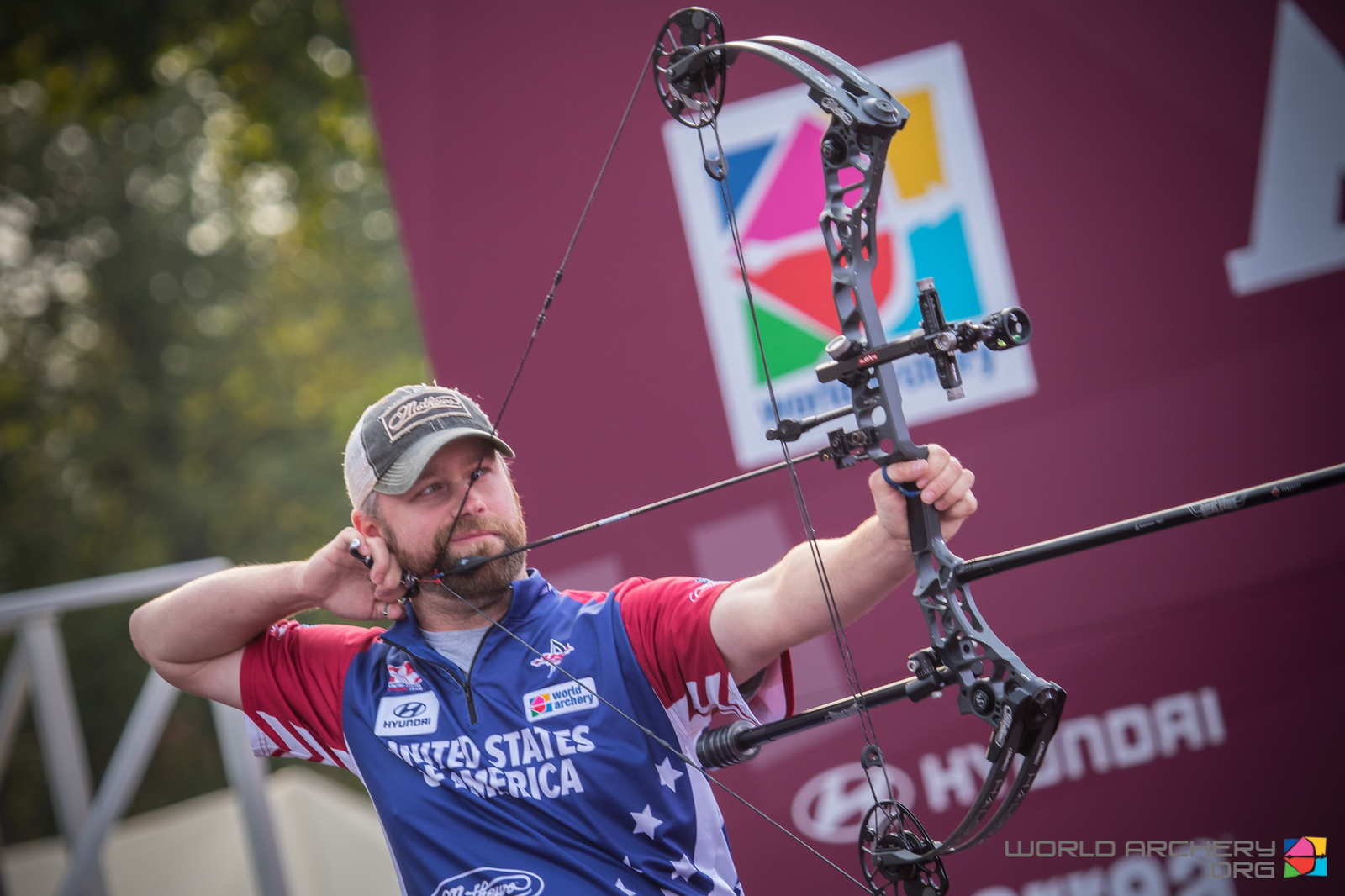 In an exceptionally high-quality quarterfinal, Braden Gellenthien dropped just one point in the second end to post a 149 against Turkey’s Evren Cagiran who scored a very respectable 146. Gellenthien was composed and confident throughout the match to seal a spot in the semifinals and another shot at the title.

Gellenthien’s semifinal against Colombia’s Daniel Munoz posed a greater challenge as the two were neck and neck until Gellenthien pulled ahead in the fourth end 117-116. Both finished with perfect 30s but Gellenthien earned his spot in the gold final, knowing his final arrow was a strong 10 before it even hit the target.

The gold final was the matchup many hotly anticipated – World No. 1 Gellenthien vs. World Cup No. 1 Mike Schloesser of the Netherlands. Putting on a show under the stadium lights as evening fell, both opened with perfect 30s, Gellenthien’s a solid group in the X.

Gellenthien dropped a point on each of the next two ends, commenting to his father in the coach’s box: “It was one of those shots where you want to let down the second you draw back.” Gellenthien did not recover as the match continued, finishing with two more sets of 28. Schloesser put 5 arrows in the X, and needing a 6 to win on the last shot, he loosed an 8, but it was enough. Gellenthien finished with the silver 147-144.

Alexis Ruiz, in her rookie World Cup season, medaled individually at every stage, working her way from bronze to silver to gold to definitively lock up the top spot for the Final. In her first match of the Final, World No. 1 Ruiz took on home crowd favorite, World Champion Natalia Avdeeva on her birthday. The stands were so loud for the nation’s pick and Ruiz opened shaky with a 27 to Avdeeva’s 29. Ruiz closed the gap to one point with three arrows to go 113-114, but as her final arrow scored a 7, the door widened for Avdeeva, and though she dropped an 8, she took the win 142-140 to advance.

World Champion James Lutz earned his spot in the Final with a win at the only world cup stage he attended this year in Antalya, Turkey. Entering the field with less experience but an impressively undefeated record, Lutz drew host nation ticket Anton Bulaev, the Universiade champion in the quarterfinals. The two matched arrow for arrow through the first three ends as Lutz was frustrated with a few 9s. Bulaev pulled ahead 117-116 in the fourth end and then posted three Xs for a perfect finish to clinch the win 147-145, ending Lutz’s unbeatable streak.

With two of the best rookie seasons in history, young hot shots Lutz and Ruiz both undoubtably have incredibly bright futures ahead in the sport. 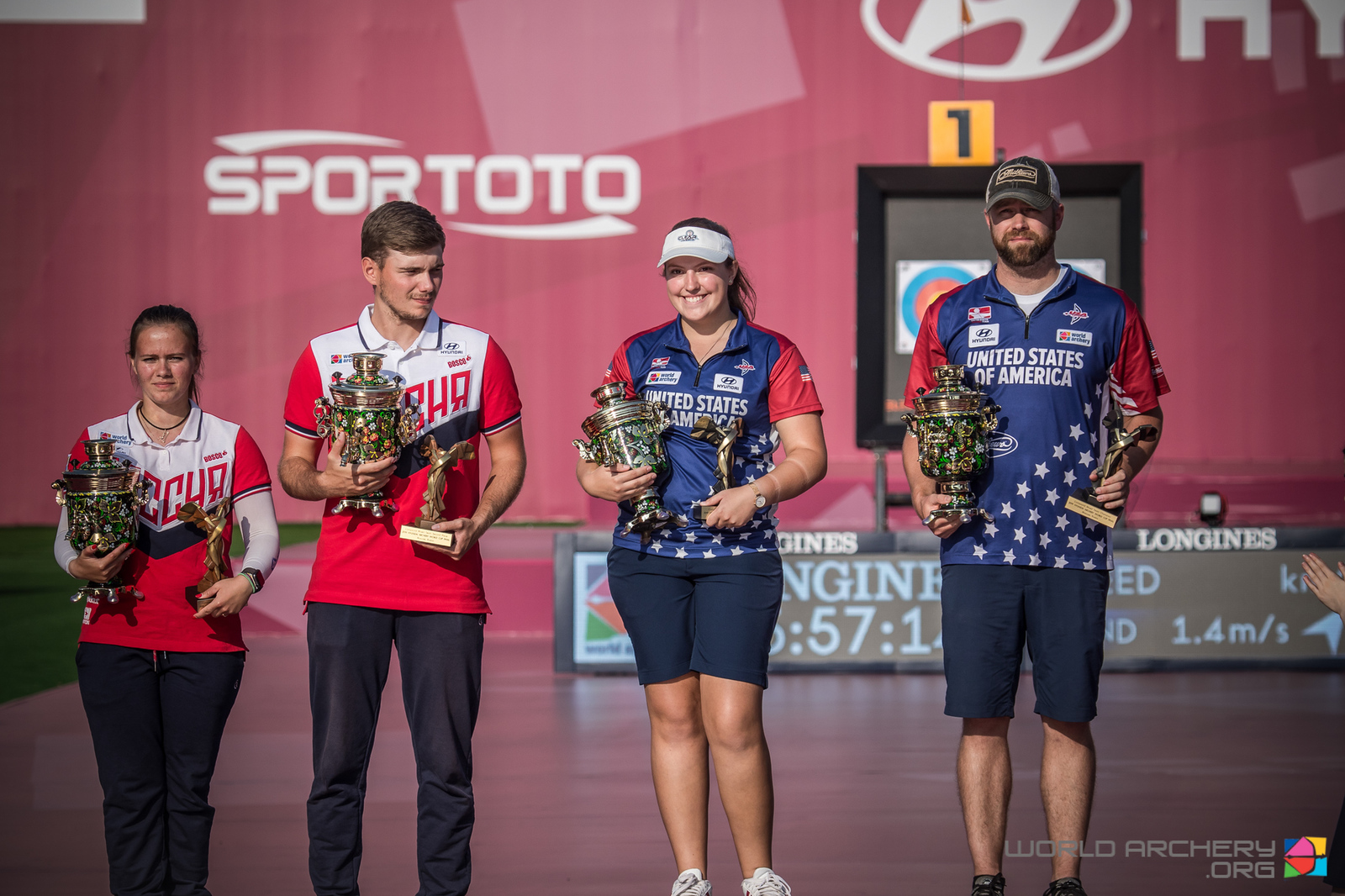 Ruiz and Gellenthien also took the stage against a young pair from Russia for the mixed team event as the highest ranked team over the season. Strong shots gave the USA pair an early lead and a straight path to a 157-155 gold win.

Competition concludes tomorrow as World Champion and World No. 1 Brady Ellison shoots for his fifth World Cup Final title at his 10thconsecutive appearance on the big stage. Complete results from the event are available at www.worldarchery.org. USA viewers can tune in to watch live on the Olympic Channel. Delayed coverage will be available on NBC. For more, follow USA Archery on Facebook, Twitter, and Instagram.