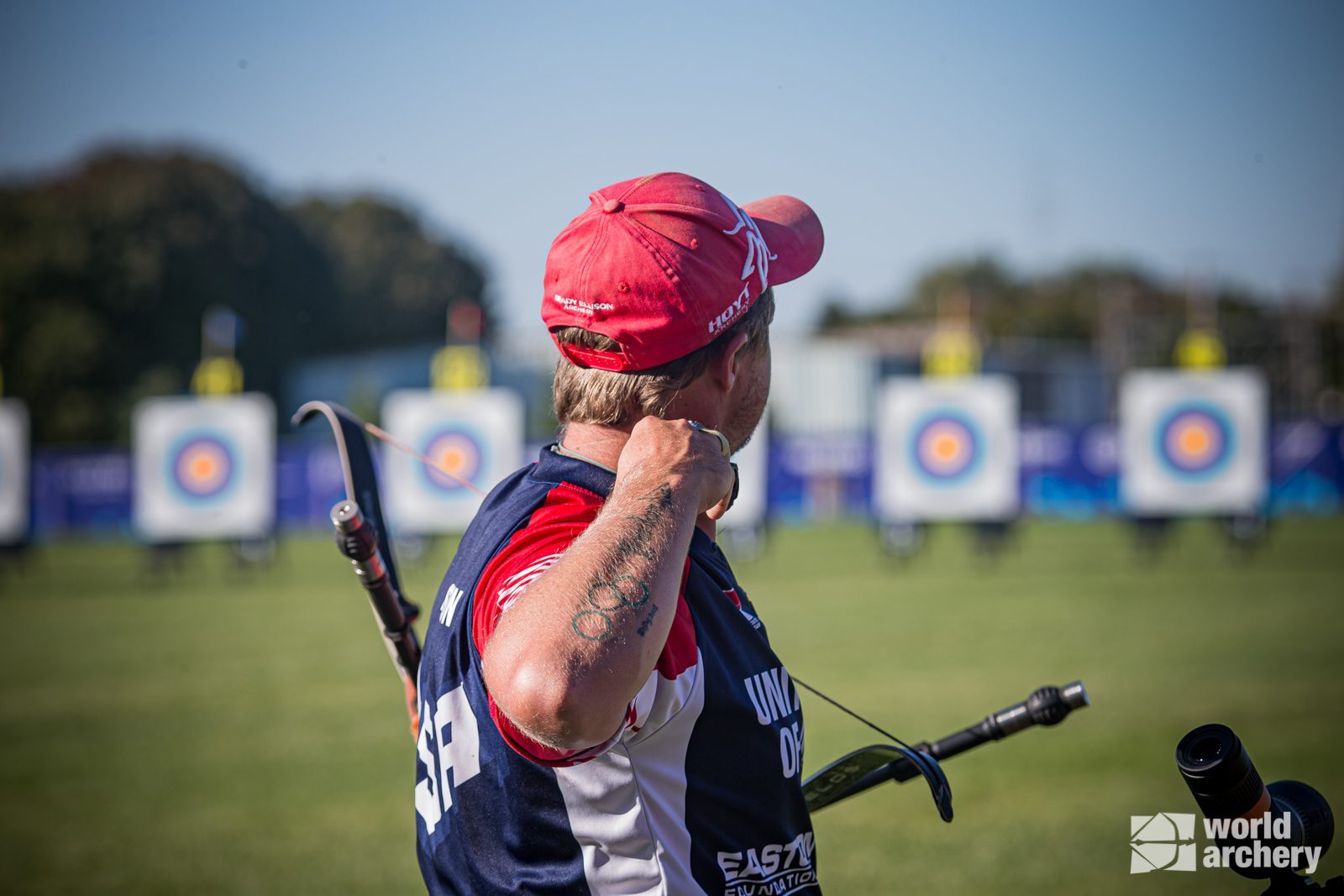 YANKTON, South Dakota – After strong qualification rounds, Olympians Brady Ellison and Casey Kaufhold pre-seeded into the round of 32 at the World Archery Championships and both powered through tough opponents to earn spots in the coveted top eight for the quarterfinal matches, which will be shot individually on the big stage, much like the Olympic Games earlier this summer.

This is the first year the Olympic Games and World Championships are held in the same year, and it’s requiring a massive push from these athletes to be in peak form and mental fortitude through so many months of Trials, training, nonstop elite competition.

Ellison, the reigning World Champion and World No. 1, told local press: “I don’t have the quit button in me. I want to win everything and it makes me mad when I don’t win. At this point, it’s just sheer determination.”

After Ellison’s first set, he knocked out three perfect sets of 30 to win 6-2 over Russia’s Tsydypov before a tight back and forth match with Italy’s Paoli that went the full five sets. Ellison came back with a 30 and 29 in the final six arrows to win 6-4 and he will face Kim Je Deok of Korea in the quarterfinals.

Kaufhold also took a 6-2 first round win over Ukraine’s Marchenko and then outscored Romania’s Amaistroaie 6-4 with a crushing final set win, avenging teammate Jennifer Mucino-Fernandez who was upset by Amaistroaie in the previous round. This will be Kaufhold's highest finish on the international target stage as a senior; she finished 4th as a junior at the World Archery Youth Championships last month.

Team USA’s compound archers suffered a rough morning; 13th and 15th seeds Paige Pearce and Linda Ochoa-Anderson made it to the round of 16, but were the farthest advancing USA compounders. Pearce had an early advantage over Slovenia’s 4th seed Toja Ellison, but was edged out 145-144 in the final arrows. Reigning world champion James Lutz was unable to defend his title after an early first round upset 144-147 to Mexico’s Becerra.

Competition continues tomorrow with the World Games qualification tournament in the morning and team medal matches in the afternoon, where USA will shoot for recurve and compound men’s gold and compound women’s bronze. Then, the top eight individual archers shoot off Saturday and Sunday, with USA’s recurve archers on the Sunday schedule. Finals will be broadcast live (learn how to watch). Complete results from the competition are available at www.worldarchery.org. Photos are courtesy of World Archery.