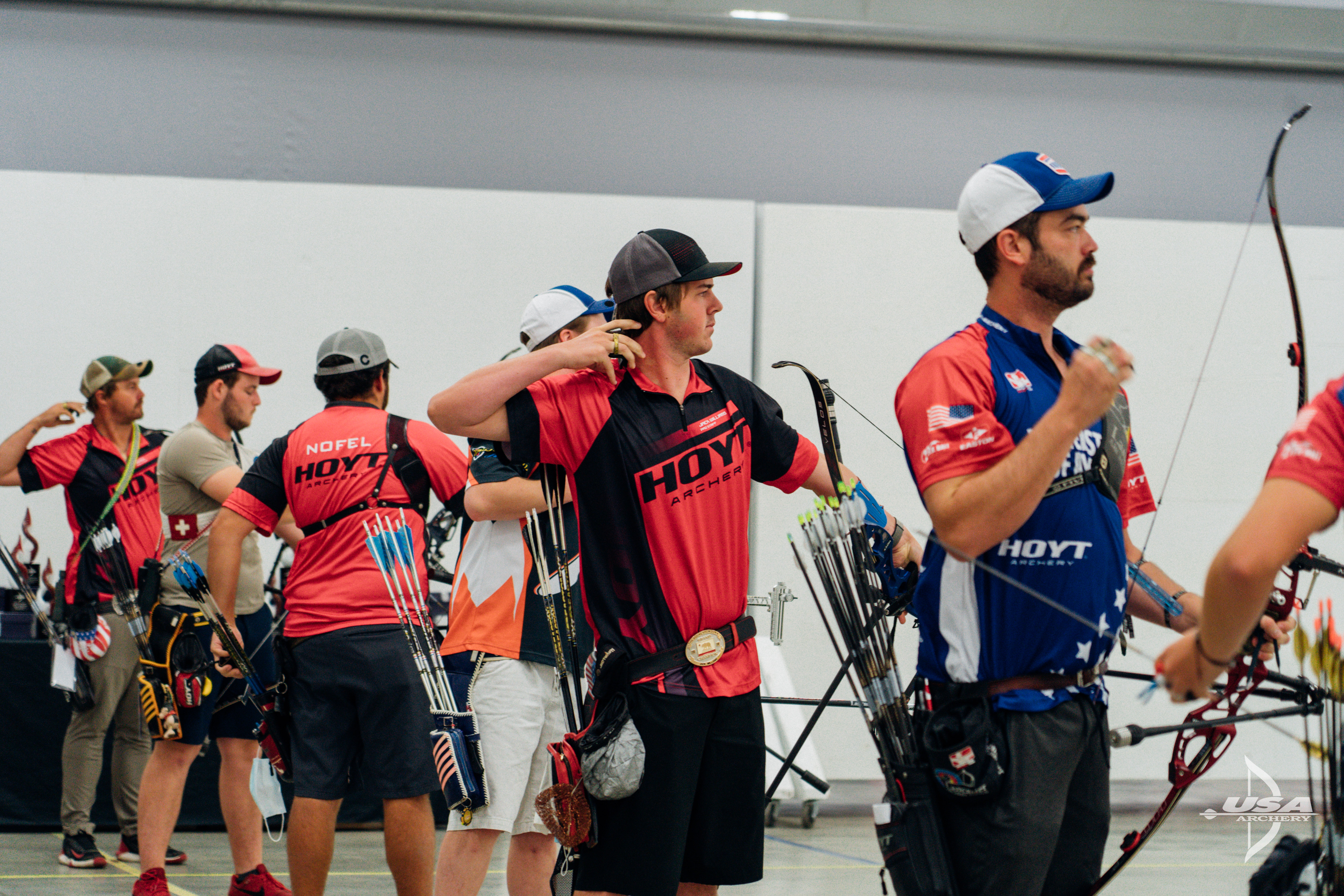 YANKTON, South Dakota – Spectacular shooting took center stage at the 2020 USA Archery Indoor Nationals Final, the spotlight showdown for over $70,000 in prize purses with payouts to all places. After a 6-month postponement following the global pandemic, the annual culminating event to USA Archery’s Indoor Nationals, saw the top qualifiers across all age groups go head to head in individual match play with outstanding performances.

This has been a challenging season with event postponements and cancellations, especially on the international calendar, but with safe social distancing and additional precautions, archers have been excited to return to competition in recent weeks. This week, the NFAA hosted an extravaganza of competitions packed into a few days in Yankton. USA Archery, which always planned to host the Indoor Nationals Final alongside their Indoor Nationals, joined in on the fun. Many archers who had been competing all week faced extreme fatigue, while others had a surge of new-found motivation in the recent return to events.

For most archers, this is the first indoor event since the NFAA’s Vegas Shoot and the World Archery Indoor World Series Final in February, and it falls right in the middle of the current outdoor season. The equipment changeup did not seem to faze Brady Ellison, Paige Pearce or Kyle Douglas. Pearce, who won both Vegas events, alongside Ellison who won the Vegas Shoot and took silver in the Final, and Vegas Champion Douglas, reigned victorious in today’s events as well. 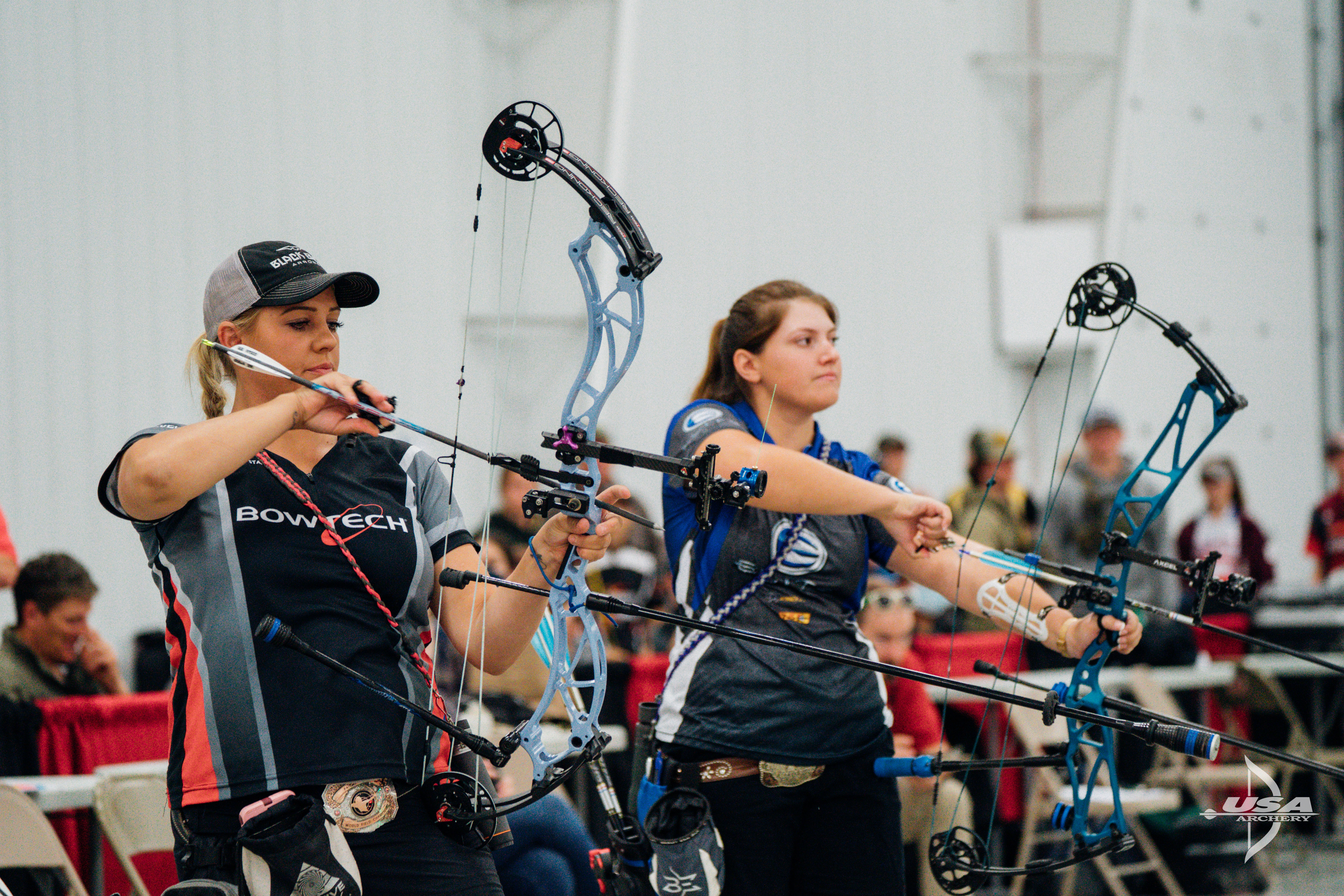 Pearce and World No. 1 Alexis Ruiz came in as the top two compound women’s qualifiers and both consistently matched each other in score with the highest wins on the field through the quarter- and semifinals. Head to head for gold, Pearce opened strong, but dropped behind Ruiz with an 8 in the second end. Coming down to the final end and a two-point swing, Pearce pulled back for a 147-146 victory – and her third consecutive Indoor Final title.

“Honestly, I felt like I shot so good out there, I just ran out of time on that shot,” commented Pearce on her 8. “Then I pretty much had to shoot perfect through the end. This win means a lot to me; since this started, I haven’t lost this event yet, so when you go out there that’s in your head. I executed my game plan really well, except for one arrow that I’m just glad I got off, but the rest was good.” 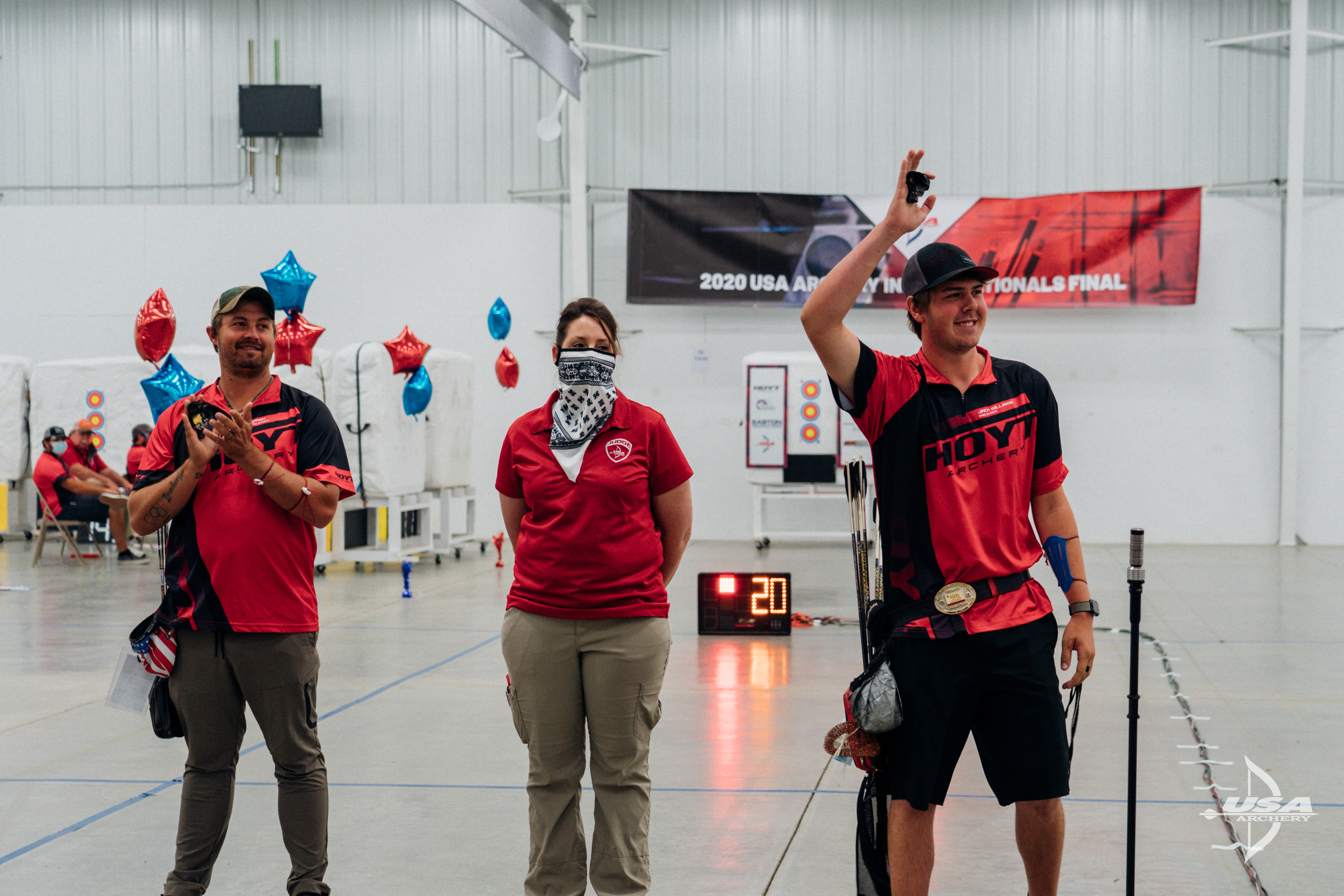 3x Olympian, World Champion, World No. 1 and World record holder Ellison also came in as the top seed. Ellison, who is largely shooting the best he ever has, also made his third consecutive gold Final, this time against Jack Williams, who is also having a successful return to competition this year with a new junior world record and several senior podium finishes. The two split the first and fourth sets, but Ellison was near perfect through the match, taking the win 6-2.

For the compound men, World No. 1 Braden Gellenthien entered the competition as the top seed, having set a national record earlier this year at the qualifying Indoor Nationals event with the first perfect 600 – an unbeatable record that will stand in history for all time. However, Gellenthien went out first round to 8th seed Steve Anderson 148-147 in an impressive, tight first round matchup. 3rd seed Dave Cousins also went out in the quarterfinals in an upset by Kris Schaff. Schaff and Anderson went on to round out the podium with Douglas, who shot lights out with a 149 semifinal and then a perfect 150 to seal the gold. Anderson took silver in the final with a 147 to Douglas’ 150 and Schaff won bronze 149-148 over Richard Jackson. 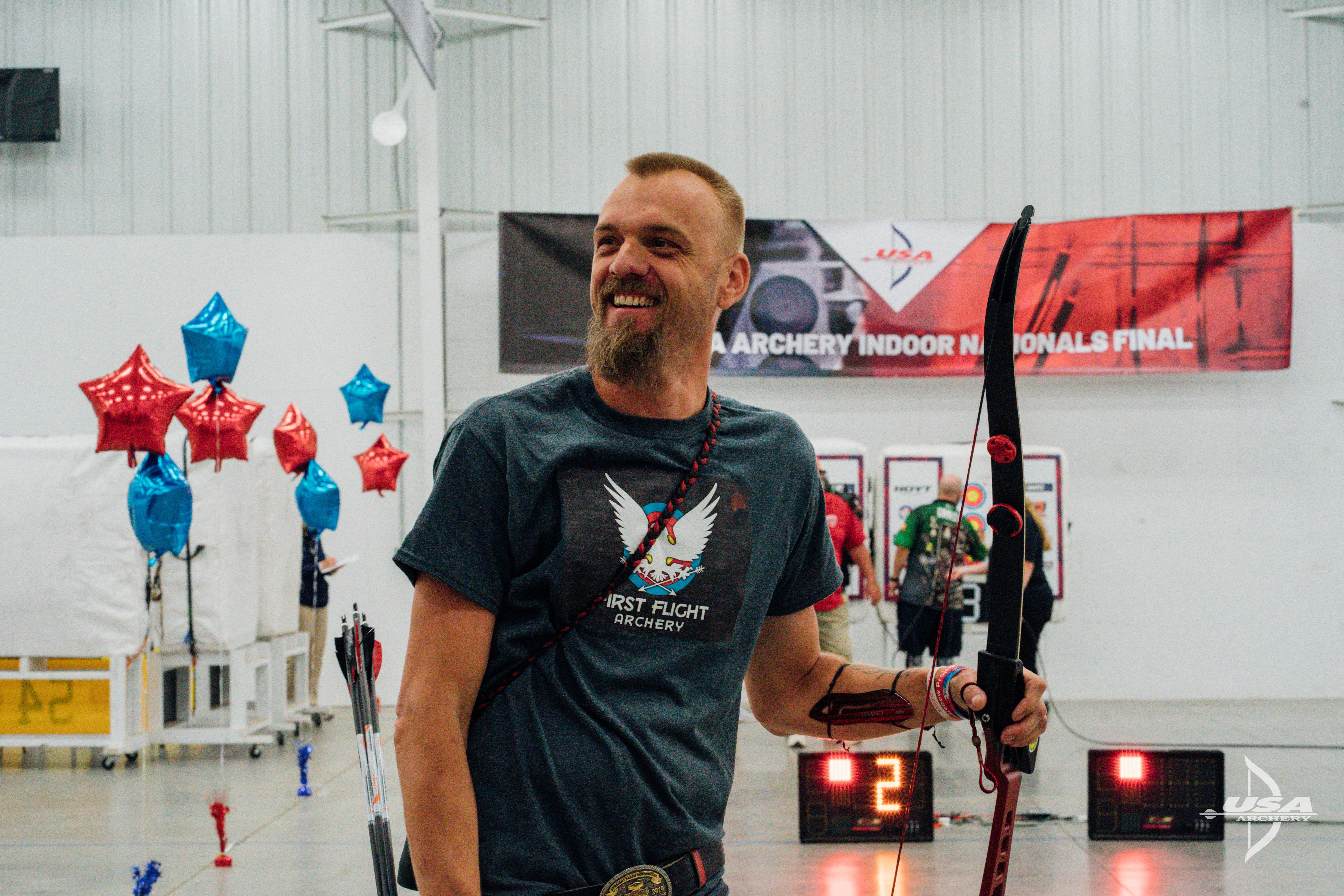 The barebow bracket, sponsored by Lancaster Archery Supply, also saw incredible shooting and surprise upsets. In the semifinals, 5th seed John Winker overtook top qualifier John Demmer III 6-4 to shoot for gold against 3rd seed Jarrett Kellan. The Kellan-Winker gold final was phenomenal, with strong scores taking each of 5 sets. Winker never dropped below a 27 and came out ahead 7-3 for the win.

For the recurve women, top seed Casey Kaufhold made her third consecutive gold final as well, and reclaimed the title with a back-to-back victory. This year, shooting against 3rd place qualifier Alyssa Artz, from her home JOAD club, Lancaster Archery Academy. The 16-year old Olympic hopeful and 15-year old up and comer had a great showing in the finals arena, with Kaufhold emerging victorious with strong scores. 4 perfect sets of 30s in the semifinals against bronze finisher Molly Nugent put her in good stead for the gold, where she continued to dominate and come out ahead 6-2. 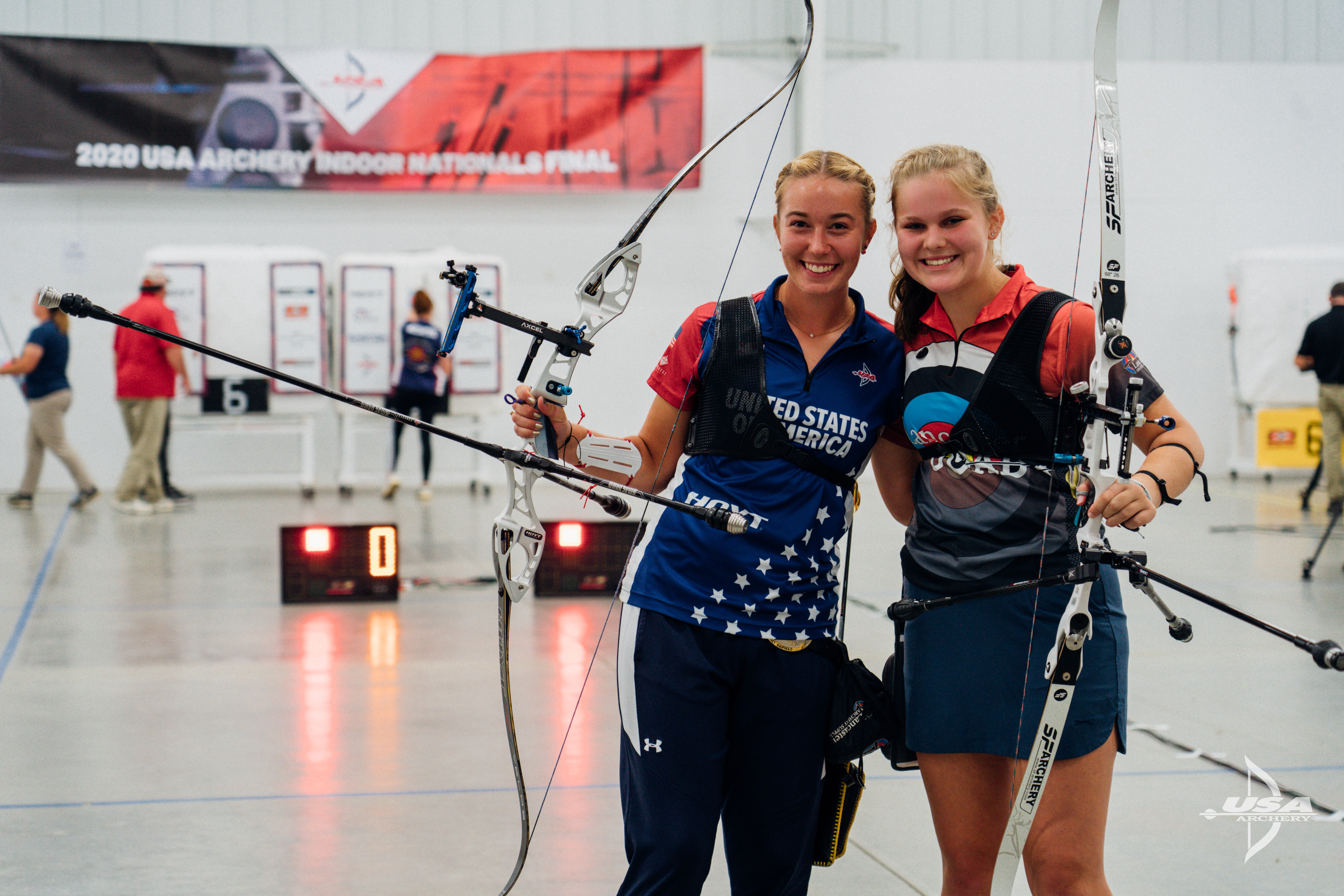 “I was happy to shoot against Alyssa because she’s a friend of mine for so long and we’ve been on the team together forever, so it was definitely a good match,” shared Kaufhold. “I did feel bad about her last arrow – she ran out of time and that happens, but I just focused on my shot and it went alright.”

Kaufhold plans to celebrate the victory tonight, then head home and prepare for the SoCal Showdown, the next stop on the USA Archery National Events circuit in Chula Vista, California next weekend.

Complete results from the competition are available on Between Ends. Photos are available in our online photo galleryand video match replays, courtesy of Competition Archery Media, are coming soon to USA Archery’s Facebook and YouTube.