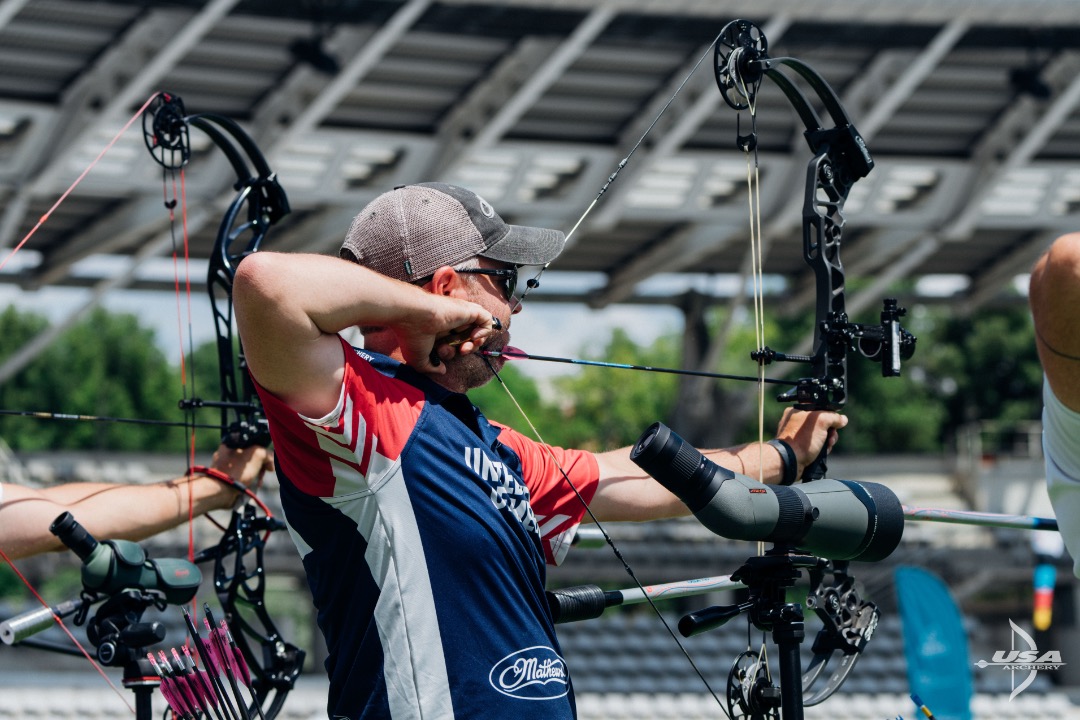 PARIS, France – Braden Gellenthien, the most decorated archer in world cup history, is on target for another podium finish this weekend after winning the compound men’s team bronze yesterday. Gellenthien is through to the final four at World Cup Paris along with the U.S. recurve men’s team of Brady Ellison, Jack Williams, and Matt Requa, who are headed to the finals to face for the team gold final.

In this morning’s team semifinals, USA’s recurve men were tied with Ukraine after four sets resulting in a single-arrow shootoff. “As I said before, it’s going to be a good week for us and it continues to be just that,” said Ellison confidently. “We did what we had to do today - everyone covered for each other. We shot the big ends when we needed to and the mistakes we made didn’t cost us in the end. In the end, we won that shootoff to get to the gold medal match and now we get to play again on Sunday.” 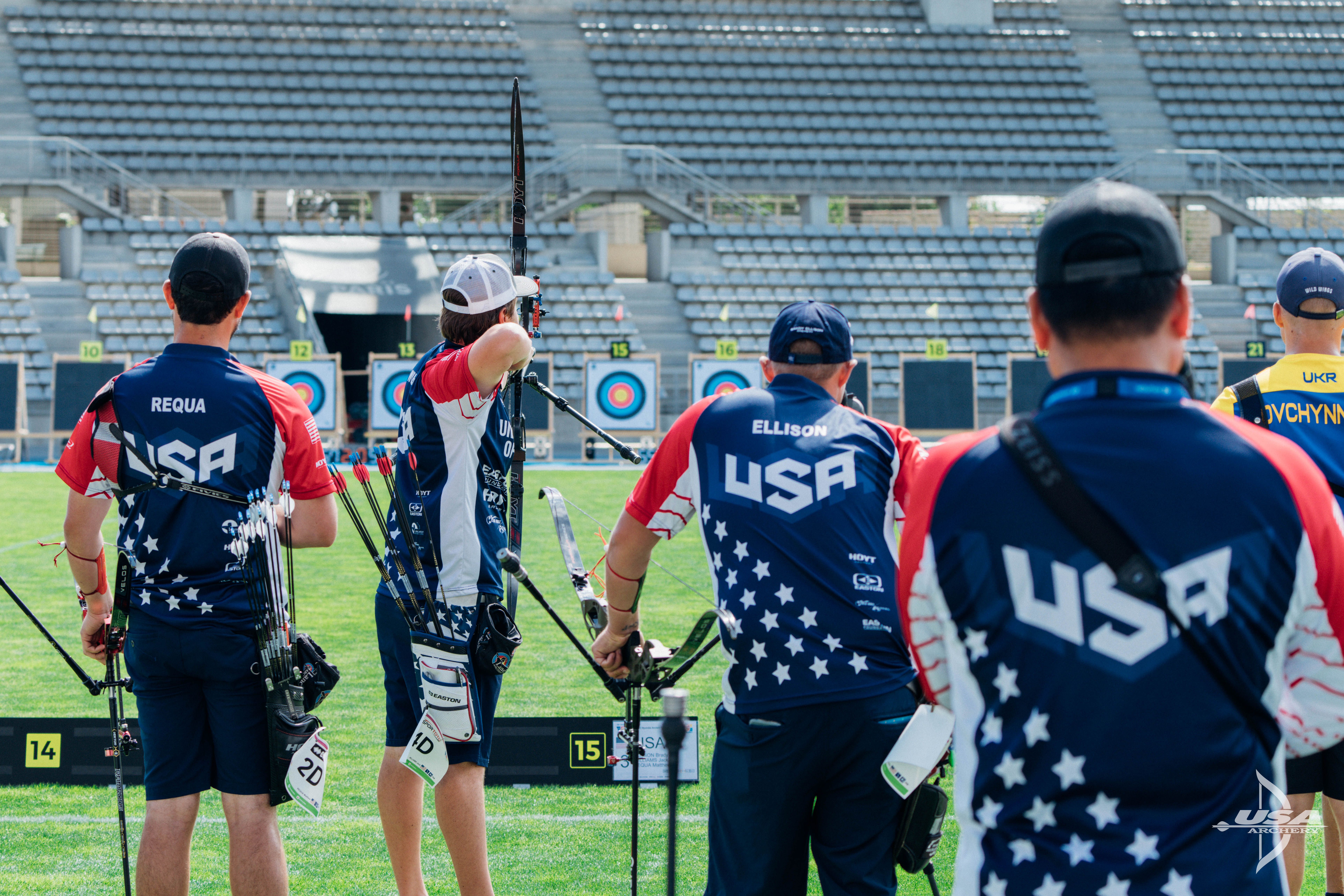 The women’s team of Casey Kaufhold, Catalina GNoriega and Jennifer Mucino-Fernandez had a strong start to the day winning a shoot off against France before a heartbreakingly close match with Chinese Taipei saw the USA recurve squad come up just one point shy in each of the first two sets and then tying the third for a 5-1 decision to finish 7th overall.

In the afternoon’s compound competition, Gellenthien advanced to the final four after a 147-146 upset of Korea’s Yonghee Choi. Moments before the match started, the wind began swirling through the stadium playing a cruel joke on the archers.

“Anytime the wind is blowing, anything could happen. When you’re only shooting 15 arrows, you don’t have enough time to make up points so you need to be really focused and strong,” explained Gelltenthien. “So when the wind picked up, that was my biggest advantage - I knew what it would take to hit the 10-ring. Knowing that I was plus-three with the last two arrows to go, I took my time, put the pin in the middle and let it rip.”

On the women’s side of the field, Cassidy Cox held on the longest before facing Estonia’s Lisell Jaatma and dropping out 144-149 to finish 9th. “Even though today didn’t end the way I wanted it to, I’m happy with my improvements in qualifications and team rounds. Hopefully, it’ll carry over to the next World Cup,” said Cox. “I struggled with the new time limit - they took off a minute from what we’re used to. So now that I’ve practiced it at an event, I’ll be more acclimated to it and be able to perform better next time.” 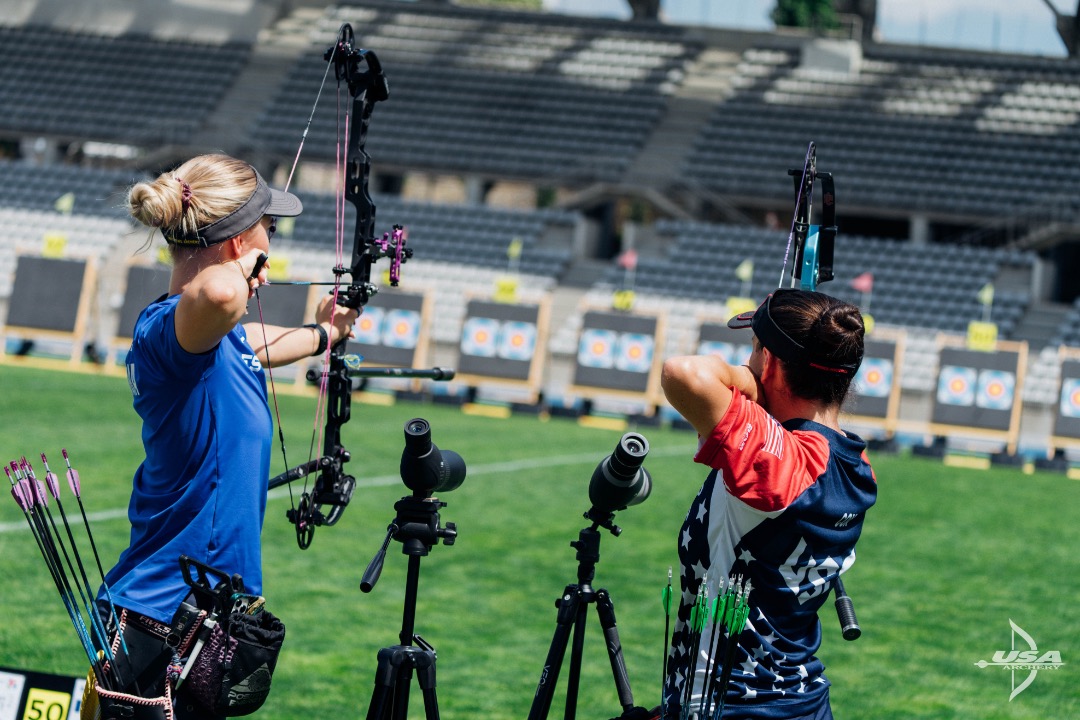 Results are available at archery.sport and photos are on the USA Archery Smugmug. Tomorrow is the final day of competition at Stade Charlety, featuring recurve individual eliminations and the mixed team competition through the semifinals, before moving to the Cha?teau de Vincennes for the finals, which will stream live this weekend on the Olympic Channel.