‘S-HERTOGENBOSCH, Ntherlands – Brady Ellison led the recurve men’s field with 200 competitors to open the World Archery Championships qualification round this morning. Scoring a 695, Ellison led the field for much of the day until the final end when Korea’s Lee Woo Seok jumped ahead by one point.

Ellison, while one of the most accomplished archers in world history, does not yet have a target world champion title to his name. Chasing the gold this weekend, Ellison shared:“You don’t win them in the ranking round, so I was just shooting. I was more just trying to break the world record today and I just made a couple of mistakes at the wrong time. 695 is a good score. It’s where I’ve been practicing all year, so it’s been normal for me to shoot this. I’m a little disappointed because I felt in this weather, if I finally got it in a tournament this year, I would shoot over 700.”

Team USA’s big priority here is securing the full team quota spots for the 2020 Olympic Games. The men’s and women’s recurve teams will need to finish in the top eight in team round eliminations to earn three spots each for Tokyo. The men ranked 7th after a drop in the second half. Jack Williams and Tom Stanwood qualified 56th and 62nd with 664 and 660. 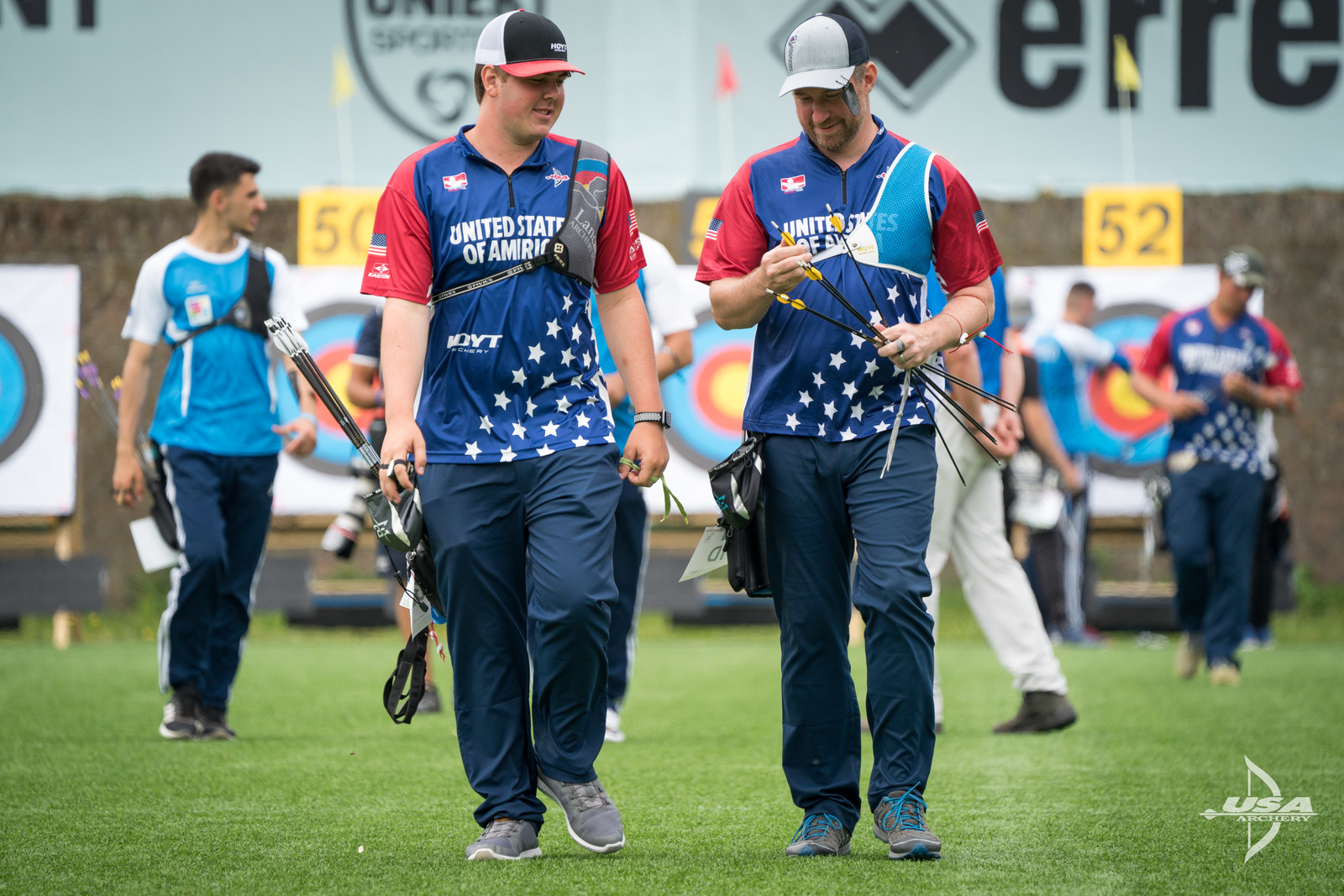 Stanwood, who returns to the team from 2017, was not feeling well today: “I had a rough night without much sleep and an upset stomach, but I had some pretty good discipline throughout the round today. I started out strong and then just ran out of gas, but I think we’re all pleased to get that first round team bye and we’ll do better tomorrow.”

Reigning youth team world champion Jack Williams has pretty consistently been the USA’s No. 2 for some time and made his senior World Championships debut today. “Overall, this was not the greatest of qualification rounds I’ve shot. I had a couple of bad ends, but otherwise was relatively consistent.” shared Williams. “I had one or two that didn’t go where I thought they would, so I’ll fix that for team rounds and we’ll be good.”

The team won bronze at the last world cup stage in Antalya a few weeks ago with stellar shooting and is a strong contender for this week’s matches.

The women’s team soared from 14th place to 10th in the final arrows of the day – a major improvement for the incredibly important team brackets. All three U.S. women scored season personal bests for the international stage. Khatuna Lorig, who qualified 25th with a 658, shared: “It was perfect weather to shoot your shot and hit the gold, so it felt good. I’ve been getting ready for this competition – it is the priority, it should be the priority, for the whole of USA Archery, so I’m happy.” 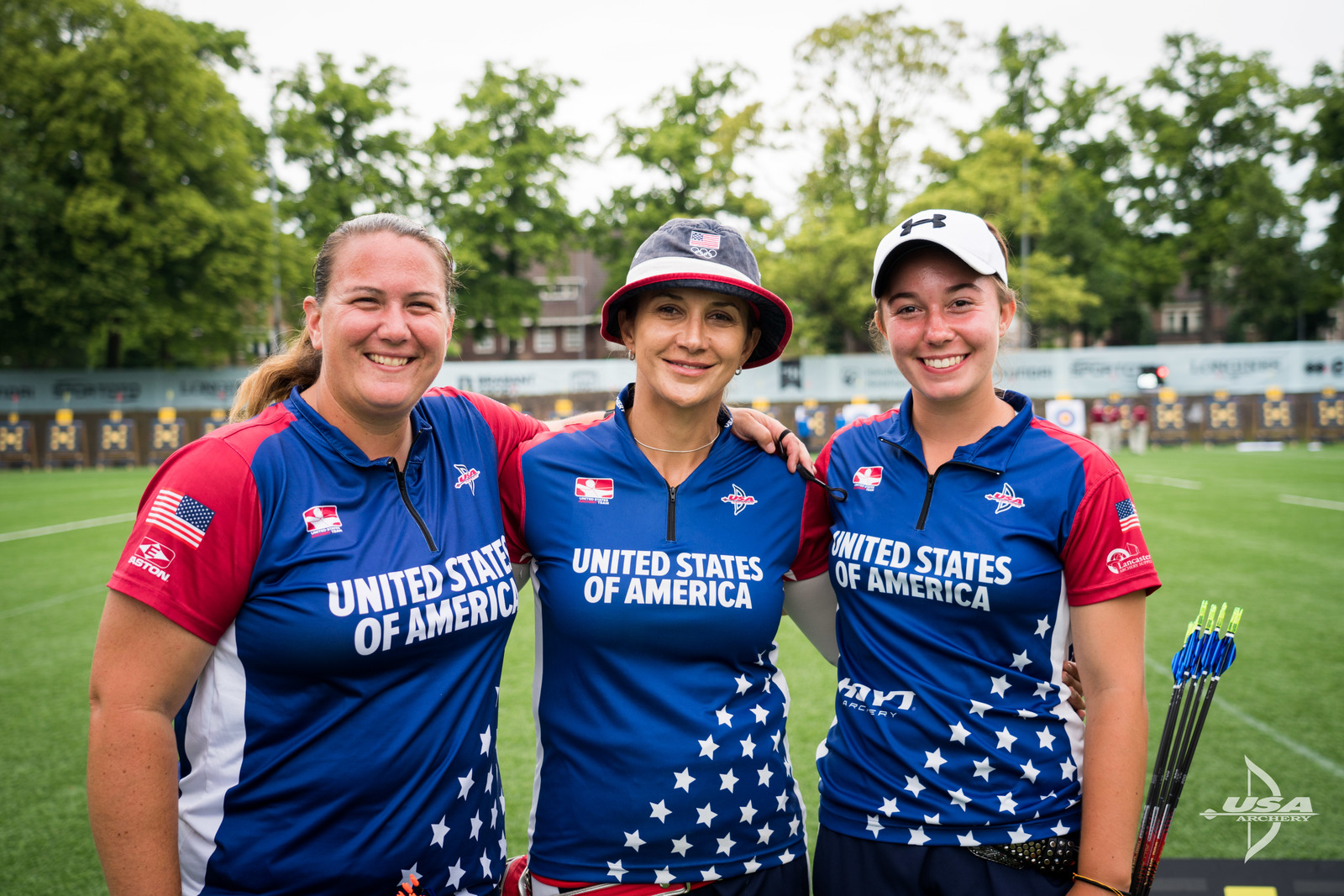 Lorig and Ellison together are 5th for the mixed team event and had a bye through this evening’s preliminary match.

Erin Mickelberry, who finished 35th shared Lorig’s excitement: “It was great having my personal coach Mike Wischer stand behind me. He’s been able to keep me level headed and make it fun and it was a blast to shoot. Now we’re sitting tenth as a team and we did great. All we can do is go up from here.”

Casey Kaufhold also had a lot of fun with her shooting today, and qualified 49th with a 647. “I have been working really hard all this last week with my coach Heather, and today I just wanted to apply everything I learned, be happy and shoot my bow,” shared Kaufhold. “I love shooting my bow so I wanted to have a great time and I did and I shot the best score I have throughout this outdoor season. I kept my head in it the whole time, I’m happy with how I did mentally and with my physical form.”

Competition resumes tomorrow with early elimination matches in the morning and compound qualification in the afternoon. Complete results from the competition are available at www.worldarchery.org. Photos are posted daily to USA Archery’s photo site. The finals this weekend will be live at www.olympicchannel.com/live. For more, follow USA Archery on Facebook, Twitter, and Instagram.