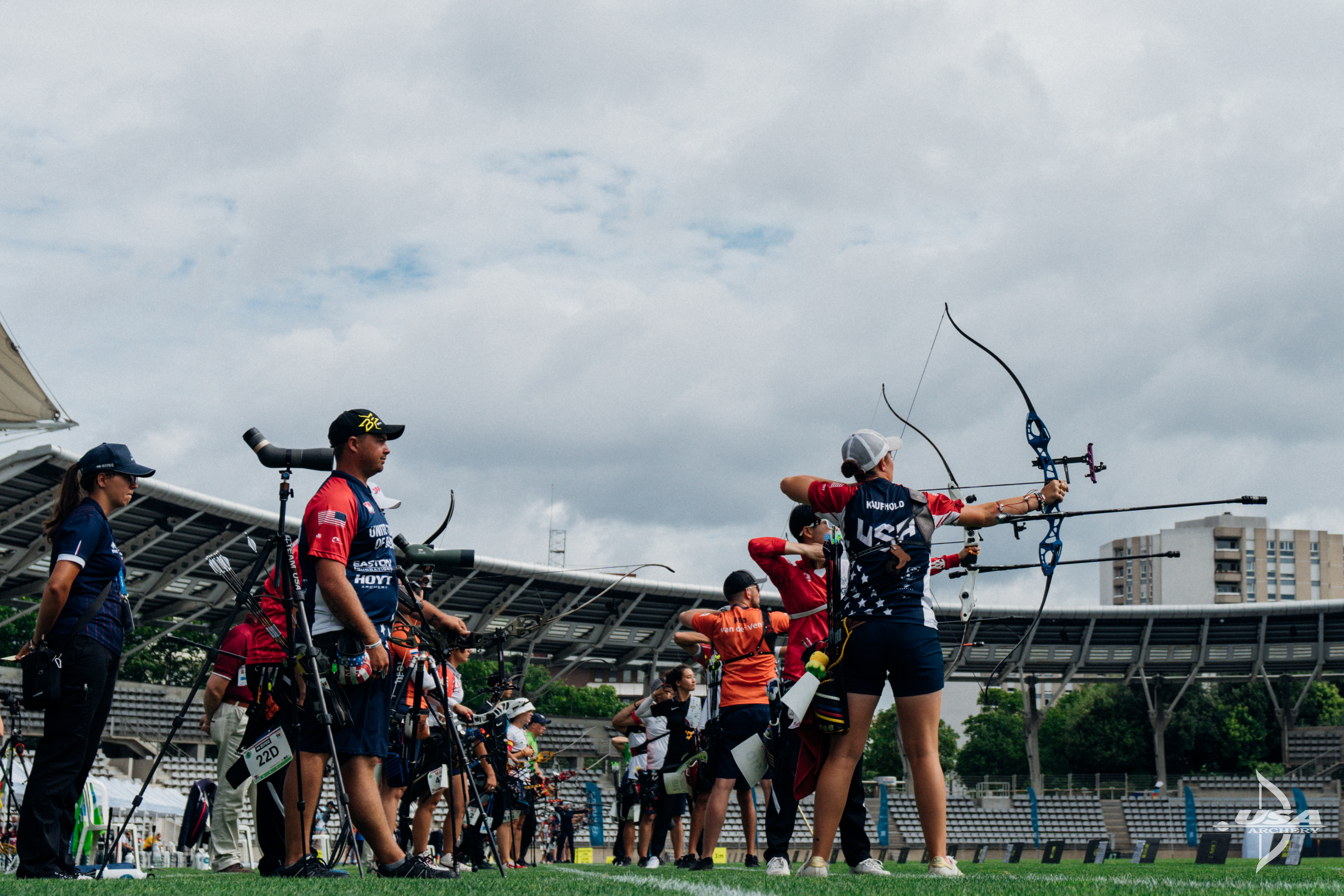 PARIS, France – Brady Ellison and Casey Kaufhold are headed to the mixed team finals to face Spain for gold on Sunday at World Cup Paris. In the individual competition, Kaufhold posted strong scores to advance to the quarterfinals and ultimately finish fifth.

Kaufhold and Ellison, who finished with silver at the last stage of the world cup in Korea, after Ellison won bronze at stage one with teammate Gabrielle Sasai, have guaranteed another podium finish this weekend after they went 5-3 in all three matches this morning. In the semifinals, the duo was on fire when they faced the Netherlands. “The first three ends were smoking 38-37-39,” said Ellison. “Then, in the last end, they gave us an opportunity and we were able to just shoot. We didn’t have to do anything special, just shoot the shot.”

The compound mixed team of Braden Gellenthien and Linda Ochoa-Anderson began the morning strong with an overwhelming 152-135 win over Switzerland. However, when it came time to line up against Turkey, the rivals started off shooting two perfect ends - a lead from which the U.S. team was unable to recover.

The recurve individual elimination round took a shocking turn when 6th seed Brady Ellison lost 0-6 to Indonesia’s Riau Salsabilla in the first match of the afternoon. Joonsuh Oh and Matt Requa also dropped out in the first matches of the day. Jack Williams made it to his second match before the wind picked up and light showers passed over the stadium. When it came time to face Ukraine’s Ivan Kozhokar, Williams lost 3-7 citing his struggle with the conditions.

On the opposite end of the Stade Charlete, the recurve women faced a similar stretch of early eliminations. Catalina GNoriega burst right out the gate posting a 28 in her first set to tie with Japan’s Utano Agu. However, Agu was able to maintain her momentum shooting no lower than a 27 for the rest of the match. Jennifer Mucino-Fernandez was closely paired with Diya Siddique from India as they exchanged sets, going to a 6-4 decision in Siddique’s favor.

Kaufhold was the last U.S. archer standing on the field. She put strong scores on the board to make her way to the quarterfinals and face Korea’s Choi Misun. Kaufhold casually mentioned after the mixed team event that the morning’s performance led to enhanced confidence for the afternoon event. Unfortunately the boost wasn’t enough to make it past Choi who shot a perfect end amongst her top-level scores.

“I started out a little slow, but by the third end, I was feeling pretty smooth and in the groove. It’s just hard to beat 29s and 30s,” said Kaufhold. “Overall, being in the top eight is always great. It was an improvement from my finish in Korea and I’m looking to continue that improvement in Colombia.”

The World Cup moves to the Chateau de Vincennes for the weekend. Braden Gellenthien will shoot in the compound semifinals Saturday afternoon. On Sunday, the recurve men’s team of Ellison, Williams and Requa will face Korea in the finals followed by Ellison and Kaufhold shooting for the mixed team gold.

Results are available at archery.sport and photos are on the USA Archery Smugmug. The finals will stream live this weekend on the Olympic Channel.