Proven and actionable Coaching and Training Techniques to improve your performance and abilities as an athlete, coach or judge.

The 2022 USA Archery Virtual Symposium is packed full as we dive into evidence-based performance and coaching methods. This year we bring coaches, athletes, parents, and club leaders insights and information from world-renowned athletes, coaches, and subject matter experts. The Virtual Symposium will feature 7 series between July and August.

Not a Member? Join today. Memberships start as low as $15.

Sessions will be recorded and sent to all registered participants if you miss the live time or want to review a session. Sponsors including Black Rifle Coffee Company and Xero Shoes will be providing giveaway products for lucky participants.

Interested in more coach education opportunities? Check out USA Archery's 2022 Coaches Workshop, a two-day in-person workshop that gives coaches a safe space to learn, grow and connect with other coaches.

Lanny Bassham is an Olympic Gold Medalist and creator of the Mental Management System. Since 1976 Lanny has been teaching Mental Management® to Olympians, business owners, Fortune 500 Corporations and the elite of sport and business community. His clients include the PGA players, Miss America finalists, Miss USA winners, World and Olympic champions, Fortune 500 companies, The United States Secret Service, The US Navy SEALS, The United States Army and Marine Corps Marksmanship Units, and Olympic Teams worldwide. 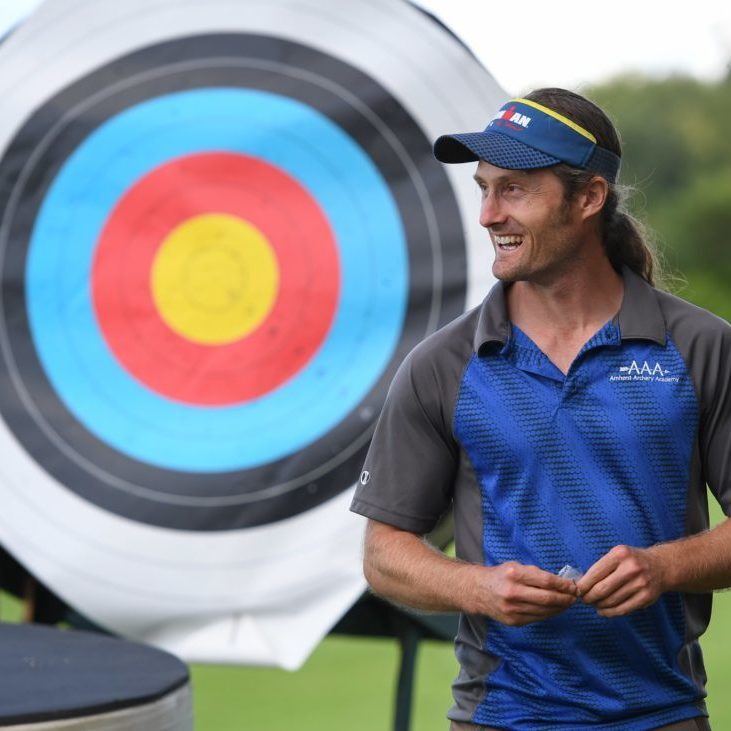 Coach Bissell studies and excels at teaching people, of all ages, to move their bodies in fun, efficient, and performance-oriented ways; and he has been doing that for 28 years. He's worked in Physical Education, Adventure Education, holds a M.Ed., was listed in Skiing Magazine (1997) as one of the 75 best ski instructors in the USA for children, and competitively races ultra marathons and triathlons to give him perspective on life, inner strength and archery. Level 4-NTS Coach Bissell founded Amherst Archery Academy in 2011 and is the East Region Head Coach of the Regional Elite Development Program.

Scott Booth is the owner of Texas Archery and Eyes on Score, a scoring app for archery. Scott is also the host of the podcast Raising An Archer. Scott has been involved in archery for nine years and is a Level 3-NTS Coach and Level 2 Judge. He has a wealth of experience in progressive informational technology leadership experience. Scott is also the president of the Texas State Archery Association and has used his experience to transform archery in Texas.

Julia Cawthra, Ph.D., CMPC is a Licensed Counseling and Sport Psychologist working to empower others toward change, building compassion, and actualizing potential. She completed her pre-doctoral internship at Utah State Counseling and Psychological Services and received her Ph.D. in Counseling Psychology with an emphasis in sport psychology in 2020 from Indiana University - Bloomington.

Brady Ellison, 33, is a full-time archer competing Internationally and in the USA. Brady is one of the World’s most successful recurve archers. He is a 4-time Olympian, 3-time Olympic Medalist, 2019 World Archery Champion and 5-time World Cup Final Champion. Ellison travels extensively competing and representing the USA at world caliber events year-round. He started out in archery with a compound bow but switched to recurve in 2006, with hopes of making the USA Olympic Team. Ellison is an avid outdoorsman who enjoys golf, fishing, spearfishing and basically anything outdoors.

Dr. Wade Gilbert is an internationally renowned coaching consultant and award-winning professor, author of the highly acclaimed book Coaching Better Every Season and Editor Emeritus of the International Sport Coaching Journal. Gilbert is a long-time advisor to the United States Olympic and Paralympic Committee Coach Education Department, is the lead author of the USOPC Quality Coaching Framework, and primary coach education consultant for USA Football. Gilbert also served as the mental performance coach for Team Canada (softball) at the Tokyo 2020 Olympics, helping the team win the program’s first Olympic medal ever.

Over the past decade, Alexander Grabner-Jarlung has dedicated and devoted his life to help people around the world to optimize their ability to communicate with each other. Alexander builds each story with consideration for psychology, neurology and biology, along with some laughs and a lot of knowledge. Alexander Grabner-Jarlung is one of the few speakers in the world who has received the eminent  “PLATINUM speaker” award from HeadGain, the world’s most comprehensive and advanced coaching system for speakers.

Peter Haberl, a licensed psychologist with a focus on mindfulness and ACT-based interventions, joined the United States Olympic & Paralympic Committee in 1998. In his current position as senior sport psychologist, he provides individual and team consultations and mental training sessions to various national team athletes with a specialization in team sports. Haberl has worked with U.S. athletes at nine Olympic Games, four Pan American Games, and one Paralympic Games. Haberl formerly played professional ice hockey in Austria. Haberl received his bachelor’s degree in sports science from the University of Vienna, Austria and his master's degree in counseling and his Ed. D. in counseling psychology from Boston University.

Dallas Jones is a current resident athlete for USA Archery. Dallas is 19 years old and started shooting archery in Brooklyn, NY. Throughout his young archery career, Dallas has enjoyed success at all levels nationally including winning the nationals in almost every youth division in the past. Dallas is now a national contender in the senior division.

KiSik Lee has served as the National Head Coach for USA Archery since 2006. From 1981 to 1997, he was Head Coach of South Korea, and in 1997 he moved to Australia to become National Head Coach assisting Simon Fairweather to win the Men's individual Gold at the Sydney 2000 Olympic Games. Coach Lee has invested decades in studying the scientific aspects of archery. He examines biomechanics, technique, body control, muscular requirements, mental concentration, and other elements, which he believes are essential to becoming an elite competitor. Coach Lee’s coaching experience spans nine Olympic Games.

Seth McWherter is 22 years old from Central City, IA and has been shooting archery for about 12 years. He's been an RA for 7 months. His competitive highlights include winning the U.S. Nationals Indoor Final in 2018 and he competed in the 2018 World Archery Indoor Championships. He also won a team bronze medal at the World Archery Youth Championship in Madrid Spain in 2019. Seth previously worked full time doing construction/remodels for the last 6 years to be able to financially support his archery dreams. His goals include winning a medal at the world championships and bringing home an Olympic Gold Medal.

Andy Neville is a World Archery International Judge Candidate, World Archery Americas Continental Judge and a USA Archery Level 3 National Judge.  He loves giving back to the sport in many different ways to include educational development of judges and has served on several different USA Archery Committees. He serves on the Officials and Rules Advisory Committee and is Chair of the Ethics Committee at USA Archery.  He started judging nationally at the 2014 U.S. National Target Championships/U.S. Open and JOAD Championships.

Paige Pearce is a world renown compound archer. She has been shooting archery since she was 18 months old! Through out her competitive career she's won 8 gold medals at the world championships, 3 silver, and 1 bronze. She has also won numerous medals at World Cup events and has been one of the best in the world in indoor, outdoor, and field archery.

Heather Pfeil has been involved in archery for over 27 years as an archer and coach. She has been the Lancaster Archery Academy Program Coordinator and coach for over 9 years. Heather is a Level 4-NTS Coach with USA Archery and has also served as the head coach for the East Region for the Regional Elite Program. As an athlete, Heather has shot both compound and recurve and was also a resident athlete at the Olympic Training Center.

Recently retired Police Sergeant, SWAT Team Leader and founder of ShotIQ, Joel Turner has developed a teaching methodology that addresses the mental issues of shooters of all precision disciplines. Most of his 38 years shooting experience has been spent in the negative depths of shot anticipation. Turner suffered from massive target panic that led him to examine how the brain works in shooting. His discovery of the core problem in shooting with the human mind has resulted in a teaching model proven to be extremely impactful for professional and novice archers around the world.

Savannah Vanderwier began her archery journey at the age of just 10 years old when her father, a bowhunter, was asked to assist their local 4-H chapter with their archery club. Vanderwier, who is a current United States Archery Team (USAT) member in the compound women’s division, is a decorated compound archer; she’s racked up silver and bronze finishes as a youth at World Archery Field Championships and team silver and gold at two consecutive editions of the World Archery Youth Championships. In her world cup debut season in 2021, Vanderwier added an individual bronze and team gold and finished 5th at the World Cup Final. In 2021, Savannah made the decision to switch to recurve to pursue the Olympic dream and in a short time has already seen success at a national level in the recurve division.

Kristy Wapniarski is a National Judge for USA Archery and Continental Judge for World Archery Americas. She is currently the President of the USA Archery - Arizona Board of Directors and Tournament Chair for the Arizona Cup (USAT). Wapniarski also coordinates state and local tournaments, and volunteers with local archery clubs and organizations. Wapniarski also serves as the West Representative for the Officials and Rules Advisory Council and is a regular presenter for the USA Archery Judge webinar series. She has a degree in Business Management HR and owns her own business.

Professor Gabriele Wulf s a Distinguished Professor in the Department of Kinesiology and Nutrition Sciences at UNLV. She is a sport scientist with PhDs from the German Sports University in Cologne and University of Munich. Dr. Wulf has conducted research in motor learning for more than 30 years. She studies factors that influence the learning of motor skills, including attentional focus and motivational variables. Her research has resulted in more than 200 journal articles and book chapters, as well as three books. Dr. Wulf has received various awards for her research, including the Distinguished Scholar Award of the North American Society for the Psychology of Sport and Physical Activity (NASPSPA) and UNLV’s Barrick Distinguished Scholar Award. She served as the founding editor of Frontiers in Movement Science and Sport Psychology (2010-2012) and the Journal of Motor Learning and Development (2012-2015). She served as the President of NASPSPA from 2014-2015. Dr. Wulf is a Fellow of the National Academy of Kinesiology. She co-authored with Dr. Rebecca Lewthwaite the OPTIMAL theory of motor learning (2016) and recently the Superiority of external attentional focus for motor performance and learning: Systematic reviews and meta-analyses, published in Psychological Bulletin in 2021.